This was Andrade's first bout since his March twelve round decision win over Jack Culcay to capture the WBA's "regular" junior middleweight world title.

Fox, who took a major step up in class, picked up a stoppage win over Euri Gonzalez in July, and won a unanimous decision over Kenneth McNeil in February. 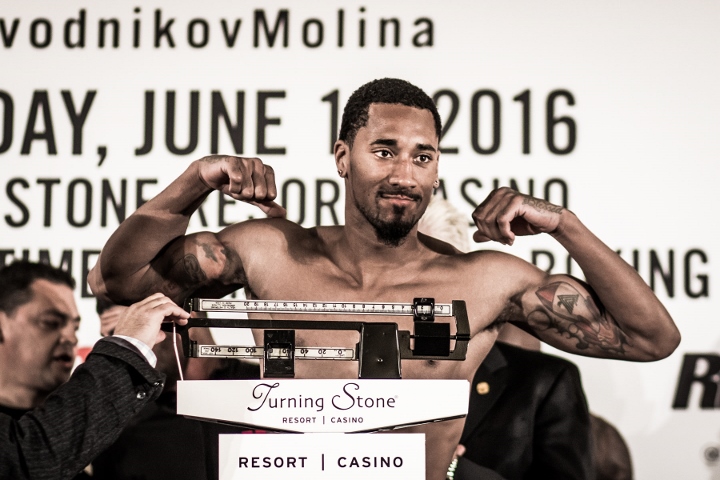 Andrade rocked Fox with a big left hand in the opening moments of the first round. As Fox rocked back to the ropes, Andrade went right after him with wild punches, but was unable to follow-up as Fox covered up well to avoid further damage. Andrade was very accurate with his punches, landing well as Fox was throwing a very lazy jab.

Andrade had no issues with the 6'5 height advantage of Fox, who also had a reach advantage and rehydrated to 180-pounds when he entered the ring - compared to Andrade who rehydrated to 167.

In the second, Andrade was really going to work and landing hard shots to the head and body. Fox had no answers as they entered the third round. Andrade was picking his punches well, controlling the center of the ring and landing many of his key shots.

There were no adjustments made by Fox as they fought in the fourth. Andrade continued to dominate the action in the fifth, and still controlled Fox from start to finish in the sixth.

During the seventh, it appeared that Andrade slipped during an exchange and it was ruled as a knockdown. Andrade was not hurt and there was no change in how the fight was going.

Andrade went to controlling the fight in the eight and never let up. Fox was unable to change the tide in the remaining rounds, as Andrade outboxed him and continued to land accurate punches to the final bell.

[QUOTE=Pan-Africanist;18153767]I thought DA looked small for 160.[/QUOTE] He was only 167 fight night. That is roughly 5 pounds smaller than GGG, 10 pounds smaller than David Lemieux & only 7 pounds bigger then Terrence Crawford who comes in at 160…

[QUOTE=Shadoww702;18154730]I would add Charlo, Sergiy , and Murata to that list. Heck probably even C-Class Saunders and Lemuix as well.[/QUOTE] He was fighting at 160lbs which means he only rehydrated by 7lbs.

[QUOTE=_original_;18153886]Yeah, I was pretty big on Andrade but so many career lulls and uninspiring performances has made it tough keeping interest in his career[/QUOTE] Well said, u took the words out my mouth

[QUOTE=paulf;18153911]You can't dance without a partner. I'm no Andrade cheerleader, but Fox wanted to go home after the first round. Dude ran and spoiled 90% of the time.... no one's going to look good in that situation. There was a…