The death of any fighter in the ring is always heartbreaking. When that fighter is 49, it’s particularly disturbing.

Christian Daghio of Italy died this past Friday, a week after he suffered brain damage in a brutal knockout loss to Don Parueang and was placed in a medically induced coma in Thailand. The image of him lying motionless on his back after the fight was stopped, his head cupped by the referee, is haunting.

His brother was quoted in the Italian media as saying, “Christian died as he wanted to die, that is in the ring. He dreamed of fighting until he was 80 years old.”

I’ve always supported the right of anyone to box as long as they can pass rigorous testing to determine whether they are fit to exchange punches with another man or woman. That has included some fighters who were well into their 40s before they retired. Bernard Hopkins, George Foreman and Evander Holyfield are the first ones to come to mind.

And my philosophy hasn’t changed after Daghio’s tragic death in Bangkok. We all have a right – or should have a right – to make a living and pursue our passions.

Foreman, 48 in his final fight, wasn’t the athlete he was 20 years earlier but he was good enough to knock out Michael Moorer when he was 45 to win the heavyweight championship in 1994. Big George would ‘ve been denied his destiny had he not been licensed to box. 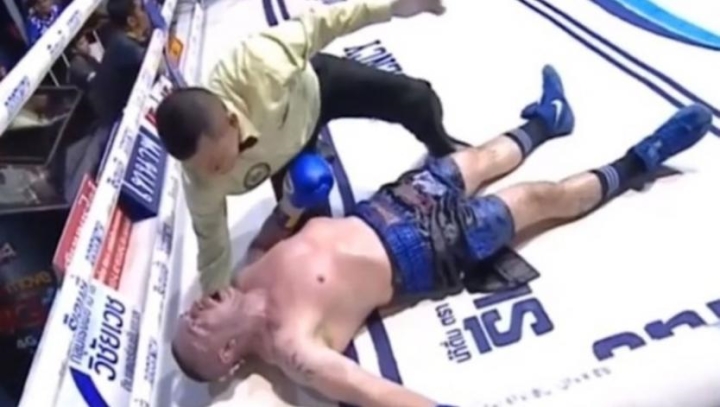 That said, this latest tragedy gave me pause. I was instinctively uncomfortable with the idea that a 49-year-old man not named Hopkins was allowed to fight a man 13 years his junior, although Daghio was once a decorated Muay Thai champion and Parueang obviously is no more than a journeyman.

Daghio dreamed of fighting until 80. Of course, that would be suicide. And boxing shouldn’t be used as tool to end one’s life even if that’s precisely the way someone would like to go out.

So where should the age line be drawn? Should a fit 60-year-old be allowed to take part in a professional boxing match? A 55-year-old? I don’t know the answer to that question or whether there is an answer. A reasonable response would be, “It depends on the person.”

The Nevada State Athletic Commission, one of the leading regulatory bodies in the world, takes precautions – including both medical and performance tests – beyond the norm when it evaluates the fitness of fighters when they hit the age of 38, among other non-age-related risk factors.

That gives me some comfort but I still feel uneasy about allowing those approaching or exceeding 50 to fight.

I was among those around the world who marveled at Hopkins’ fitness and ability a half century into his life, which is why he was affectionately labeled a “freak.” He could still beat all but a few 175-pounders today at 53.

However, I had questions even about Hopkins in the end. I was in house when he was sent through the ropes by 27-year-old slugger Joe Smith Jr. in December 2016 at the Forum in Inglewood, California, reportedly hitting his head on the concrete floor in the process.

Hopkins walked away and we’ll never know what role his age played in the outcome. However, I’ll always have an uneasy feeling when I think about that fight. He could’ve been seriously injured – or worse – as a result of the blow to his head. Can you imagine the outcry had a 51-year-old legend been killed in such a manner? It might’ve been the darkest day in the history of the sport.

The point is this: In retrospect, one could reasonably wonder whether allowing Hopkins to tangle with a young fighter of Smith’s ability was a good idea, just as it makes sense to wonder whether Thai officials should’ve protected Daghio from himself even if Parueang has limited ability.

I don’t know what conclusions – if any – to draw from the Daghio tragedy.

Again, I applaud the Nevada State Athletic Commission and other bodies for raising the standards for older fighters hoping to be licensed. Perhaps that’s enough. Perhaps it makes sense to raise them further for those past 38, allowing only the true physical “freaks” out there to fight after their mid-40s.

I only know one thing for sure: The powers that be in boxing and others who care about the combatants should think long and hard when someone as old as Daghio insists upon fighting.

We all will die. What we do with our lives is much more important than how or when we die. Death is inevitable and unpredictable. So live it the best way you know by doing what you love to do.…

[QUOTE=el***;19261917]This author is a dumb phaggot. Evander Holyfield is NOT a good example of a past 40 success story in boxing. The guys speech is unrecognizable.[/QUOTE] Vitali is probably the only success story past 40 that I've seen, but he's…

The guy was trying to support his wife and daughter. So he had to fight. And it was his choice, but I hope we can Red Pill as many guys as possible with his story. Guys sometimes it's better to…

What is a 49 year old man doing still fighting?