Last week, Mayweather has been making social media posts - attempting to get fans to believe that he's going to make his debut in Mixed Martial Arts.

In two videos, a barefoot Mayweather is entering an octagon cage, which is widely used by the UFC and other MMA companies, and shaking out a few moves. 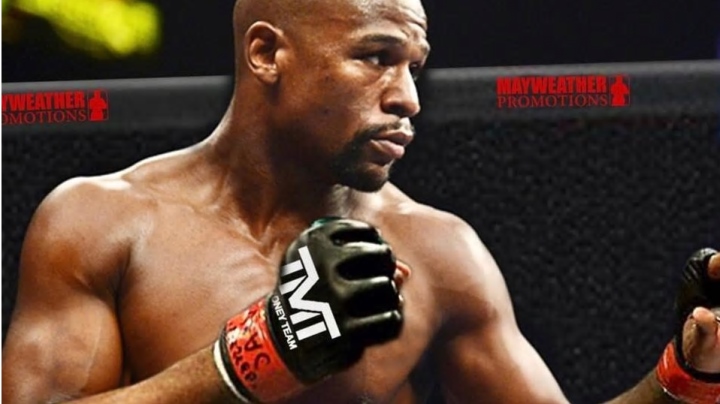 Mayweather snapped a two-year retirement back in August of last year, when he fought UFC superstar Conor McGregor, who was making his boxing debut.

After stopping McGregor in the tenth round at the T-Mobile Arena in Las Vegas, the 40 year old Mayweather announced his retirement from the sport - with a perfect record of 50-0 with 27 knockouts.

Mayweather claimed that he was approached by the UFC with a massive financial package to make his debut in MMA - but he denied that he was considering the idea of fighting in MMA.

De La Hoya believes Mayweather is once again looking for ways to take away coverage from Canelo Alvarez vs. Gennady Golovkin.

Not long after, Mayweather announced that he was facing McGregor at the very same venue in August - three weeks before De La Hoya's show.

Mayweather-McGregor was a media frenzy and took away a lot of coverage from Canelo-Golovkin.

So does De La Hoya believes Mayweather is once again trying to hurt one of his events?

"Of course, but it's fine. Our fight is gonna do 3 million homes, so we're good," De La Hoya told TMZ.

“I mean Floyd is a, you know him and his attention. He can’t let anyone have attention so he does this. He’ll never fight in the UFC.”

[QUOTE=Luilun;18464461]You people are funny he gran so he lost but Floyd runs and it’s okay . Watch the fight again Trinidad only won 3 rounds[/QUOTE] Why are you bringing up Floyd’s style? Oscar can’t fight like Floyd and that’s why…

Mayweathers gonna be Mayweather regardless what Oscar does or puts together.....So if GGG/Canelo wasnt taking place Mayweather wasn't gonna be his usual self?? Oscars delusional....Insecure Oscar is the one who "needs attention" whenever Mayweather tries to keep his name relevant.....that…

[QUOTE=JcLazyX210;18463970]Hmmm I smell a sad fan! Oscar did fight everybody in their prime. I agree with that and I respect him. That second mosley fight I also agree, however it goes down as a LOST. Yes he also outboxed Trinidad…

Oscar not lying guys. Floyd is a big time attention whore and we all know he aint fighting in the ufc.