Oscar De La Hoya saw something redeeming in Mayweather-McGregor after all.

The retired superstar-turned-promoter admitted to ESPN’s Stephen A. Smith during his radio show Tuesday that Floyd Mayweather Jr.’s technical-knockout victory over Conor McGregor at least made more people pay attention to boxing than usual. De La Hoya has been one of the harshest critics of Mayweather-McGregor, a pay-per-view extravaganza “The Golden Boy” trashed by deeming it a complete mismatch and shameless money grab by the biggest respective stars in boxing and mixed martial arts.

De La Hoya went as far as to Tweet “F*** YOU #MayweatherVsMcGregor BOTH OF YOU ARE DISRESPECTING THE SPORT OF BOXING” just minutes before Mayweather and McGregor weighed in for their August 26 fight at T-Mobile Arena in Las Vegas. 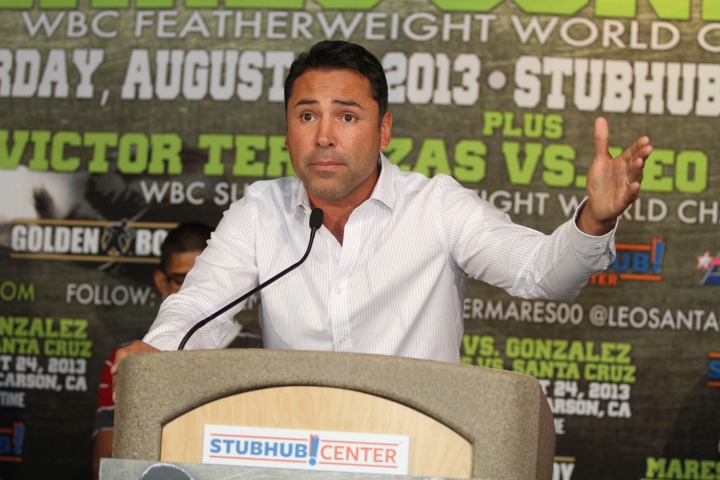 “Well, I mean, look, I think the only good thing that happened with Mayweather and McGregor is that more people saw boxing,” De La Hoya told Smith. “You know? Which is great for the sport, and what I can tell those people is that, ‘Look, if you wanna see a real fight now, then tune in to September 16th.’

“I mean, the reason why I keep pushing this fight is because, like you said, this is a real fight. This is a middleweight fight that – we haven’t seen this type of a fight take place in a long time. You have two top guys, two knockout guys, they don’t know how to take a step going backwards. They’re in the best shape of their life, they’re gonna bring out the best of each other and it’s gonna be a war.”

De La Hoya has billed Golovkin-Alvarez as “the real fight” since Mayweather-McGregor was announced in mid-June, about five weeks after Alvarez (49-1-1, 34 KOs) and Golovkin (37-0, 33 KOs) confirmed that they would finally fight September 16.

“I’m speaking the truth,” De La Hoya said. “I laced up the gloves and I know for a fact that this is gonna be a classic. This is gonna be a – I talk to my partner, Bernard Hopkins, and he tells me, ‘Look, this is a great thing we’re doing at Golden Boy Promotions. We’re giving the fight fans the exact fight that they’ve been wanting for a while now.’ And this is exactly what boxing needs, especially after the Mayweather-McGregor fight.”

Oscar De La Bitter needs to shut up and get over it. The fight's done. Move on.

[QUOTE]“I mean, the reason why I keep pushing this fight is because, like you said, this is a real fight. This is a middleweight fight that – we haven’t seen this type of a fight take place in a long…

[QUOTE=SkillspayBills;18020058]Bitter *****. If I wasn't such an enormous Canelo and GGG fan I'd want this PPV to fail just to spite this bastard. But I love my sport more than I hate his putrid guts.[/QUOTE] I know a few people…

Today in Yahoo News... [quote]It’s been nearly two years since Mickey Rourke dabbled in boxing for the first time in two decades and scored a second-round TKO over Elliot Seymour in Moscow, Russia. Although many assumed it would be the…

Everyone was saying all along this would be good for boxing because of the visibility. It didn't matter if it wasn't going to be competitive because the boxer would have the upper hand. If Oscar didn't have such a hatred…