Andrew Cancio and Alberto Machado are officially ready to run it back.

Both boxers made weight for their anticipated super featherweight title fight rematch, which takes place Friday evening live on DAZN from Fantasy Springs Casino in Indio, Calif. Cancio weighed in right at the 130-pound divisional limit for the first defense of the title, while former champ Machado weighed in at 129.8 pounds.

The weights were flopped for their first fight in February, where Machado struggled in barely making 130 ahead of the worst night of his career, losing his title and unbeaten record in a 4th round knockout loss to Cancio–who weighed 129¾ last time out—in this very venue, also streaming live on DAZN. 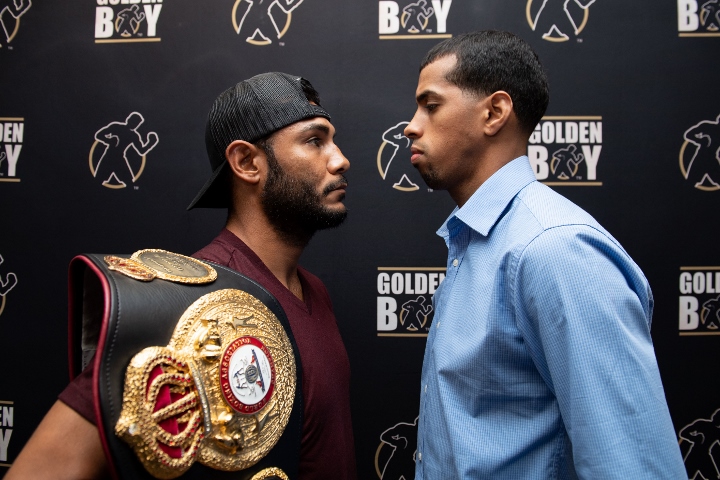 Concerns arose among his team as to whether it was still safe to make the limit, especially given his 5’10” frame which is abnormally tall for the super featherweight division. Machado (21-1, 17KOs) switched his diet and means of strength and conditioning, looking the part at least on the scales on Thursday.

While he didn’t have to sweat out the results at the scales, there’s still the matter of exorcising his demons in the ring.

Cancio (20-4-1, 15KOs) provided the picture perfect entry to a storybook comeback, now three fights into his ring return after having previously written off the sport altogether. The working-class hero from Blythe, Calif. left the sport in disgust following a Sept. 2016 loss to Joseph Diaz Jr. and subsequent fallout with his management team, taking on a full-time job as a construction technician for Southern California Gas Company.

The desire to return to the ring was too tempting to pass up, prompting a return last April. Cancio has won three straight including his off-the-canvas knockout win over Machado in one of the year’s biggest upsets. Despite scoring his career best win and winning a major title, he still works full time at his construction job, in fact using vacation time just to participate in fight week and attempt his first title defense.

In the evening’s chief support, Angel Acosta—Machado’s longtime stablemate—attempts the fourth defense of his junior flyweight title as he faces Mexico’s Elwin Soto.

Acosta (20-1, 20KOs) weighed in right at the 108-pound limit, although comfortably making weight this time. It wasn’t quite the case in his last fight, when the Puerto Rican knockout artist had to strip to his birthday suit in order to hit the mark for an eventual 8th round knockout of former titlist Ganigan Lopez in this very venue less than three months ago.

Mexico’s Soto (14-1, 10KOs) weighed in at 107.4 pounds for his first career title fight. The bout also marks just his second in the United States, his previous trip across the board resulting in his lone career loss back in his third pro fight. The 22-year old enters Friday’s title fight having won his last 12 starts, although stepping way up in competition.

[QUOTE=Kannabis Kid;19845894]Some people are just built different Celestino Caballero and Jefferey Mathebula are 5'11 and both fought at 122 meanwhile Diego Corrales was 5'10 and fought at 130 hell Ali Funeka is 6'1 and fought at 130 for a while…

First fight was a barnburner. I thought it looked like Cancio was going to get blasted out early but the whole fight changed when he started ripping to Machado's body. I expect the rematch to be just as good. Undercard…