NEW YORK – Joey Dawejko took one look at Frank Sanchez and immediately determined that there’s no way Sanchez is two years younger than him.

Sanchez’s listed age is 27, but Dawejko thinks his upcoming opponent comes from a long line of Cuban professional athletes that are believed to be older than they claim. An amused Dawejko mocked Sanchez’s listed age during an interview with BoxingScene.com following a press conference Thursday at The Tillary Hotel in Brooklyn. 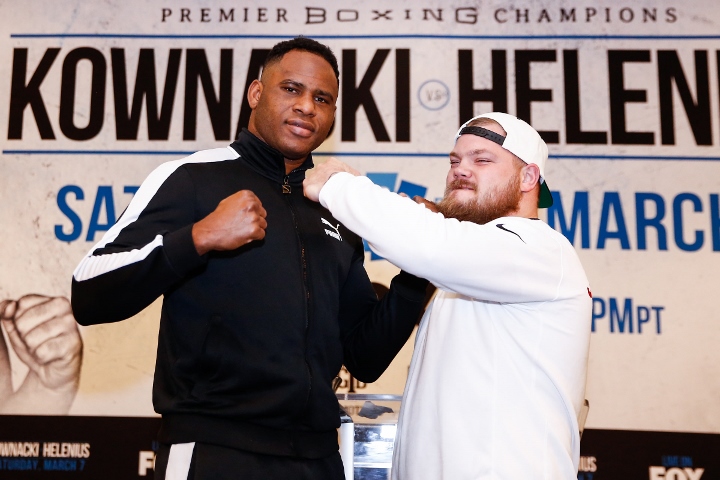 Dawejko (20-7-4, 11 KOs) is scheduled to face Sanchez (14-0, 11 KOs) in a 10-round heavyweight bout Saturday night at Barclays Center in Brooklyn. The highly touted Sanchez, who’s trained by Eddy Reynoso, is listed as a 10-1 favorite to defeat Dawejko in a fight FOX will air as the opener of a three-bout broadcast from Barclays Center in Brooklyn.

Philadelphia’s Dawejko is considered a step up in competition for Sanchez, who was a decorated amateur before making his pro debut in September 2017. The experienced, durable Dawejko has fought former IBF champ Charles Martin, contenders Bryant Jennings and Jarrell Miller, and fringe contenders Sergey Kuzmin and Amir Mansour during his 10-year pro career.

Dawejko must overcome at least a six-inch height disadvantage against the 6-feet-4 Sanchez, whom Dawejko predicted during the press conference he’ll knock out and “treat like a little kid.” Youth is one thing the 29-year-old Dawejko is certain isn’t an advantage for Sanchez.

Maybe so but Joeys nickname is living up to its name the Tank , which is a slow moving object built to take punishment. Sanchez putting on a boxing clinic.

Sanchez got a nice HGH gut going on too. Let's see how durable he is

Lol what is it with these guys man Rigo,Ortiz & Sanchez all look old as hell. Hate to see what they look like in their 60s/70s Lara is the odd ball he looks the same as he did 10 years…