David Toussaint made the most of his opportunity to fight on the biggest boxing card in Australia’s history.

The Toussaint-Mosley match was broadcast by ESPN as the opener of a Saturday night telecast in the United States. The card featured WBO welterweight champ Manny Pacquiao against hometown hero Jeff Horn in the main event. 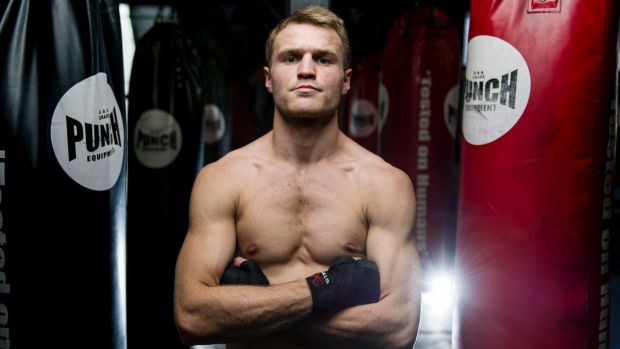 Mosley mounted a rally in the seventh and eighth rounds, but it wasn’t enough to overcome the lead Toussaint built earlier in the fight.

“I walked him down,” Mosley said. “I walked down a power puncher. I was landing the straight right all day. I could tell he was getting tired. He chose to box instead of fight the last two rounds. I won that fight.”

An aggressive Mosley attacked Toussaint at the start of the seventh round and landed several body blows. A tiring Toussaint began holding Mosley with just under a minute to go in the seventh round, but stood and traded with Mosley just before round ended.

Mosley continued to follow Toussaint around the ring in the sixth round, yet found little success.

Toussaint unloaded a combination to Mosley’s head with about 50 seconds to go in the fifth round, which Toussaint controlled.

Mosley was aggressive to start the fourth round, perhaps sensing he had fallen behind on the scorecards. He landed a pair of good right hands just after the midway point of the fourth, but Toussaint fared well in the later in the fourth, when he made Mosley’s head snap back with a left uppercut.

Toussaint continued to build on his lead in the third round by consistently connecting with his jab and body punches.

An accidental clash of heads caused a cut along Toussaint’s hairline in the second round. That didn’t stop Toussaint from drilling Mosley with a straight left at the around the 30-second mark of the round, which backed Mosley into the ropes.

The last 10 seconds of the second round also featured a spirited exchange in which Toussaint and Mosley connected with power shots to the head.

Toussaint hit Mosley with two solid left hands in the final 40 seconds of the first round, when Mosley did his best work with his jab.

The one Aussie judge Kettlewood voted for Moseley, had it wrong... it should have been a UD, I had it 5 -3 for Toussaint... Jr showed nothing,this was his 15 seconds of Fame...

[quote=tobylee1;17819144]mosley jr is just not good of a fighter and it doesn't look like he has anything to make him a serious contender[/quote] conlan and molsey jr are both average fighters getting extra hype for no reason...

[QUOTE=nghtmr111;17819137]I agree bro, highly overrated and beyond underwhelming output.[/QUOTE] if he wasnt irish or hadnt flipped of the judges he would get no hype....

[QUOTE=p4ptbe;17818875]Conlan has to be the worst fighter to get sooo much buzz! He is even worse than mcgregor...[/QUOTE] I agree bro, highly overrated and beyond underwhelming output.