David Lemieux Confident He Can Claim Gold at 168-Pounds

David Lemieux is confident he can win a world title belt in another weight class.

That journey begins tonight as Lemieux will make his debut at 168 pounds when he squares off against Max Bursak at the Bell Centre in his hometown of Montreal, Canada. 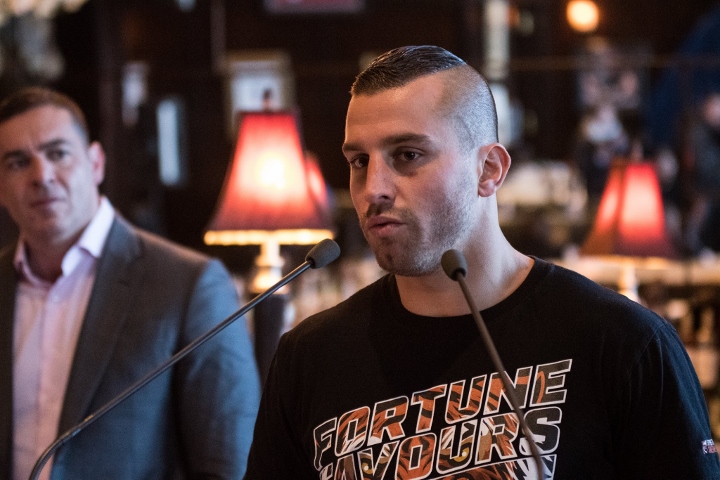 The former IBF middleweight titleholder last fought on Sept. 15 of last year, knocking out Gary ‘Spike’ O’Sullivan in the opening round in Las Vegas.

Lemieux was scheduled to fight Tureano Johnson on the undercard of the Canelo Alvarez-Rocky Fielding undercard on Dec. 15 in New York City, but had to withdraw from the fight during fight week for severe dehydration. Lemieux even had to check into a local hospital as the weight cut weakened him.

Lemieux, who will turn 31 on Dec. 22, is a devastating puncher, but can his power carry over to 168 pounds and have any effect on bigger and stronger fighters he will now face?

Golden Boy Promotions, which co-promotes him with Eye of the Tiger, thinks so.

“David is ready for 168 pounds,” Golden Boy Promotions president Eric Gomez told Boxingscene earlier this week. “He wants to challenge any of the world champions.”

Bursak (35-5-2, 16 KOs), who resides in Kiev, Ukraine, stopped Beka Mukhulishvili in the fifth round of his last bout on Oc. 5. The 35-year-old is unbeaten in his last three bouts since losing to then-WBO Gilberto Ramirez in April of 2017.

Heavyweight prospect Arslanbek Makhmudov (9-0, 9 KOs) of Russia will square off against former world titleholder and faded Samuel Peter (38-8, 31 KOs) in a 10-round bout.

We haven't heard anything from him in a long time.

David Lemieux is Grade A garbage.

His power might be better at 168. He's hit his ceiling as far as skills are concerned but getting down to 160 was probably taking its toll. If he looks good tonight, I'd love to see him in there with…