David Benavidez Gets Off The Floor, Beats Gavril For WBC Belt

David Benavidez didn’t get the knockout he sought, but the precocious puncher still made history Friday night.

Benavidez went the distance for just the second time in his four-year pro career, yet won the vacant WBC super middleweight title by split decision at The Joint at Hard Rock Hotel & Casino in Las Vegas. The game Gavril took advantage of Benavidez tiring in the second half of the fight, which helped him win their 12-rounder on one of the scorecards. 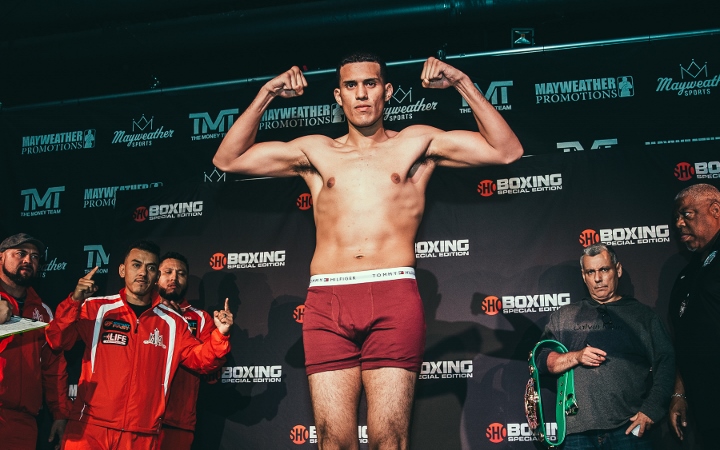 Phoenix’s Benavidez (19-0, 17 KOs) got his second wind in the 11th round and battered Gavril throughout that round, and for much of the 12th round. Gavril (18-2, 14 KOs) made matters even more interesting, though, when his sneaky jab dropped an off-balance Benavidez with 55 seconds to go in the fight.

Benavidez didn’t seem hurt and got right up to finish the fight on steady legs.

“I hurt him in the last four rounds and I’m thinking to myself, ‘I wanna close this. I wanna close this,’ ” said Benavidez, who went 12 rounds for the first time. “But, you know, that could come around and bite me in the ass later in the future. You know, I got a little reckless. I got knocked down. I came back and I could’ve went five more rounds. But the dude is a tough fighter. Hats off to him. We got a great fight. Maybe we could probably get ‘Fight of the Year.’ ”

Romania’s Gavril gave a far different opinion of what he feels took place.

“I think I won the fight,” Gavril said. “I dominated the fight. I can’t say nothing.”

Benavidez became the youngest champion in the 33-year history of the super middleweight division as well. Before Friday night, that distinction belonged to Darrin “Schoolboy” Van Horn, who was 22 when he won the IBF super middleweight title in May 1991.

Benavidez and Gavril were tactical in the first round, but began trading in the second round the way their reputations indicated they would. Benavidez started to slow down Gavril with body shots during a competitive third round.

Benavidez battered Gavril and bloodied his nose in the fourth round. Gavril landed body shots on Benavidez about a minute into the sixth round, but Benavidez waved him forward.

Gavril landed a couple of right hands to Benavidez’s head later in the sixth. Benavidez responded by landing a left uppercut that backed up Gavril.

A hard right hand by Gavril hit Benavidez flush on his chin late in the seventh round, yet didn’t appear to affect him. Gavril had a good eighth round, when he threw punches in combination and out-worked Benavidez.

Gavril kept working at a higher rate in the ninth and 10th rounds, though Benavidez seemed to hurt Gavril with a right hand to the side of his head in the 10th.

A rejuvenated Benavidez blasted Gavril with power punches throughout the 11th round. Gavril held as best he could in that round, but was hurt and exhausted.

Benavidez picked up where he left off at the start of the 12th round, until Gavril knocked him down.

Dirrell (30-1-1, 24 KOs) was supposed to box top-ranked Callum Smith for the WBC title Badou Jack vacated to move up to 175 pounds earlier this year. England’s Smith (22-0, 17 KOs) decided to participate in the “World Boxing Super Series” rather than fight Dirrell for the WBC championship.

Benavidez, ranked fourth by the WBC, replaced Smith as Dirrell’s opponent. Gavril is the WBC’s sixth-ranked contender at 168 pounds.

[QUOTE=Boxing42;18029932]Benavidez is gonna beat the accent out of those chumps, groves barely got a title smith is fighting easy pickings and eubank took an L to a smaller saunders[/QUOTE] He's got the golden ticket to fight the winner of the…

I've watched Benevidez since he fought Cobb (so 8-9 fights ago) and believe he's an enigma. He has the ability to freeze fighters with his combinations, but each time I watch him, I feel like "if he would just go…

Benavidez will fuuuck up groves, smith and all those weak ass European level bums.

[QUOTE=StudentOfDaGame;18028824]Hahahaha this is the Kid that Groves, Smith and Eubank Jr were lucky to avoid????. LOL what a joke.[/QUOTE] Benavidez is gonna beat the accent out of those chumps, groves barely got a title smith is fighting easy pickings and…

[QUOTE=1hourRun;18028668][img]https://i.imgur.com/niACtWA.gif[/img] Floyd Mayweather and Badou Jack's reaction, TMT SALTY![/QUOTE] lol floyds cool and I like jack a lot but you know they're bias because gavril is TMT