Danny Garcia is well aware of the often intense criticism directed at him over the past 2½ years.

The undefeated fighter from Philadelphia just tries to avoid paying it much mind. He has had to do that throughout this week because a large faction of boxing fans and media have taken issue with Garcia taking a tune-up fight against Colombia’s Samuel Vargas on November 12 in his hometown, rather than heading straight to a welterweight championship unification fight against Keith Thurman.

“I’m motivated by love,” Garcia told BoxingScene.com. “I have a lot of love and support in my family and from my fans. So I don’t really feed into the hate. I just go in there and get the job done. I can’t let people get me mad. I’m never mad, so I’ve just got to go in and there do what got me this far – and that’s just be me.”

The 28-year-old Garcia’s practical, professional approach to handling his critics aside, there isn’t a more polarizing undefeated world champion in boxing.

He’s 32-0, yet an enormous army of doubters contend his record should read 30-2.

The WBC welterweight champion’s majority decision victory over Lamont Peterson 18 months ago was at the very least debatable. Two bouts before he topped Peterson at Brooklyn’s Barclays Center, Garcia scored an even less convincing majority decision win against Mauricio Herrera in another 12-rounder.

That was the night Garcia’s career took one of several tumultuous turns for the worse.

Merely accepting the Herrera fight was a mistake. Garcia’s market value never was higher than when he upset Argentine knockout artist Lucas Matthysse in a 12-round, 140-pound title fight the majority of fight fans and media expected Garcia to lose.

He didn’t just beat Matthysse in September 2013. He did it rather easily.

Talk of a fight against Floyd Mayweather Jr. was quickly silenced by Garcia’s father/trainer, Angel Garcia, who claimed the timing wasn’t right for Garcia to move up from 140 pounds to 147 for the Mayweather fight. Problem was, the timing couldn’t have been more perfect for Garcia to fight Mayweather. 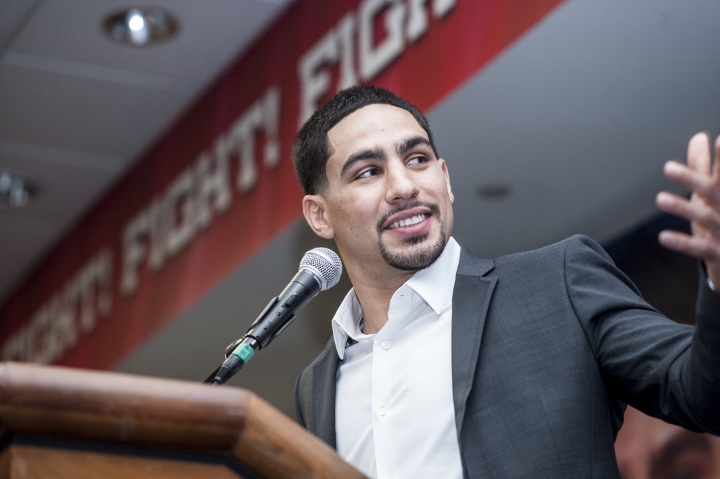 Mayweather would’ve dominated Garcia had they fought, but that’s not the point. Garcia would’ve made at least $4 million for facing Mayweather, likely more. And his first defeat would’ve come against the best boxer in the world, not, at least in the court of popular opinion, to the unheralded Herrera.

If money is your primary motivation – and at times this seems to be the case with Garcia – then what better way to maximize your earning potential than to fight Floyd Mayweather? You’d have to fight five or six Herreras to come close to making Mayweather money.

Besides, no one would’ve faulted Garcia for losing to Mayweather, who wound up meeting Marcos Maidana in a reasonably competitive May 2014 fight that spawned an immediate rematch four months later.

Garcia, his adviser, Al Haymon, and then-promoter Oscar De La Hoya compounded the Mayweather mistake by allowing Garcia to fight Rod Salka right after the Herrera debacle. Herrera deserved a rematch, yet Garcia and his handlers acted as if he clearly won their fight and lined up a complete mismatch.

Garcia reportedly made $700,000 for his predictably easy demolition of Salka, whom Garcia knocked out in the second round of an August 2014 fight at Barclays Center. Once frustrated fans learned how much money Garcia made for obliterating Salka, he became a constant target for criticism.

And rightfully so, to some degree. Just don’t expect Garcia to apologize for accepting as much money as possible for that low-risk proposition. Or any other fight, for that matter.

Nevertheless, his narrow win against Peterson didn’t help his cause, either. Since then, neither his technical knockout defeat of former two-division champion Paulie Malignaggi nor his wide win in a 12-rounder against former four-division title-holder Robert Guerrero did anything to enhance his reputation.

Those weren’t Salka-like fights, obviously, but Malignaggi and Guerrero were out of their physical primes by the time they fought Garcia.

That brings us back to Thursday, when Garcia was left to explain his current predicament.

That’s the complicated thing about Garcia’s star-crossed career. For all his physical limitations, he always finds a way to win, sometimes even when he didn’t actually win.

It’s an uncommon trait that should make him one of the sport’s more beloved boxers. That, and his pre-Herrera resume is impressive – from hard-hitting Kendall Holt, all the way to Matthysse, the supposed boxing boogeyman of 2013.

The fight-changing left hook Garcia uncorked against Amir Khan in July 2012, the punch in the third round that helped him win a fight he had been losing badly, is the type of stuff appreciative fight fans rarely forget. Conversely, they won’t forget Herrera or Salka or Peterson any time soon.

Those are among the reasons there has been such backlash regarding Garcia taking this tune-up fight against an unknown opponent who already has been knocked out by Errol Spence Jr. Many of Garcia’s critics and fans alike would prefer that he fight Thurman next.

Garcia contends that it wouldn’t be smart to fight Thurman (27-0, 22 KOs) after a 13-month layoff. That would be a more acceptable rationale for some if not for the fact Garcia’s long layoff largely is his fault, and/or that of Haymon’s Premier Boxing Champions.

Garcia isn’t looking to argue with his critics, though. Assuming everything goes according to design against Vargas (25-2-1, 13 KOs) at Temple University’s Liacouras Center (Spike), he says he’ll embrace the Thurman fight, just the type of challenge we’ve wanted Garcia to accept the past 2½ years.

It is tentatively set for sometime in March, depending upon the network TV schedule that month.

Whenever Garcia-Thurman happens, Garcia will take the same approach to handling his critics that has worked so well for him at times during his nine-year pro career. He’ll try to prove how good he is against yet another opponent that’s supposed to beat him.

I'm a Danny Garcia fan. Come at me.

He could combat some of his haters by combating a guy that gives the perception of a threat. He's had an abysmal first year at 147.

I agree. It was close. It was a rough fight but Garcia got away with too many low blows. I thought the knockdown could have easily been called a push down by Garcia . The fight could have been a…