Danny Garcia: My Next Fight Should Be On Pay Per View!

If Danny Garcia successfully gets past Ivan Redkach on Jan. 25, his exploits following that could come on an amplified stage.

“My next fight should definitely be on pay-per-view,” Garcia told BoxingScene.com in an interview. “I feel that I’m overdue. I should have been on  pay-per-view already … We just have to take it one fight at a time. I thought I was going to fight Errol Spence Jr. [before his car accident], but things changed. I definitely need this victory to move on to bigger and better things.” 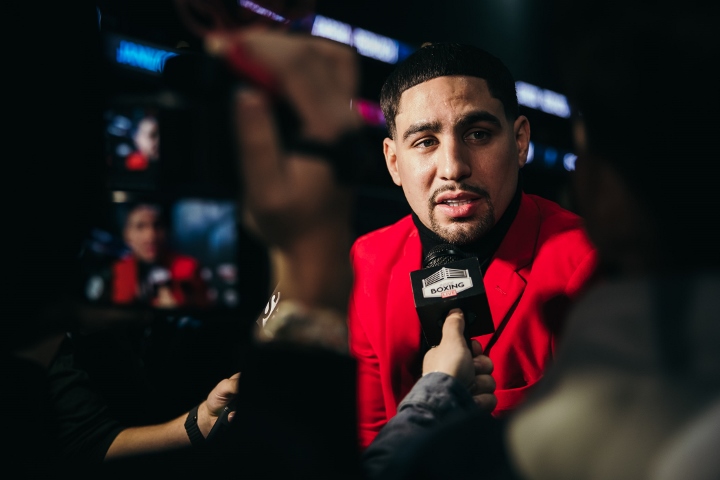 Garcia is looking to carry the momentum from his seventh-round technical knockout of Adrian Granados in April in Los Angeles.

“I was the first person to stop Granados, and I proved that I’m a better fighter than him by doing what no one else could,” said Garcia. “A lot of people said it would be a tough fight. It definitely sent a warning to all other fighters.

“Camp for Redkach has been going great. I have no injuries. I’m locked into training. We’re putting in that hard work, and we’re working smart. It’s just another day, and another dollar.”

Garcia, a Puerto Rican who fights out of Philadelphia, is looking to further make a mark in the famous fight town that features a banner month of boxing of home grown sons in Jaron Ennis, Jesse Hart, Julian Williams, Stephen Fulton, Tevin Farmer and Garcia all in separate fights.

“There are a lot of hungry fighters in Philly who want to prove it in the boxing world,” said Garcia. “It’s a big month for Philadelphia boxing. There’s a lot of great talent coming from the city. I don’t want to compare fighters from my city. At the end of the day, we’re all motivated and want to be the best. We’ll let the fans be the judge of who’s the best.”

It ain't PPV worthy if it ain't against the Pacman, Spence or Crawford.

[QUOTE=Wyl-Out;20324687]He was already on a huge ppv card co main event on Mayweather vs Alvarez when he fought Lucas and that was his best win besides Khan. How long ago was that ��[/QUOTE] Yes, that was a long time ago,…

[QUOTE=emceetns;20321850]To be fair, Garcia didn't say that he should headline his own PPV. He simply said he should be on PPV, meaning that he could easily be the B-side for a Pacquiao or Spence fight.[/QUOTE]He was already on a huge…