Danny Garcia: I Hope I Didn't Scare Manny Pacquiao Away

CARSON, Calif. — Danny Garcia did what he needed to do to re-enter the welterweight title picture on Saturday.

But Garcia is now worried he showed too much during his dominant seventh-round technical knockout against Adrian Granados at Dignity Health Sports Park.

"I hope I didn’t scare Manny Pacquiao away,” Garcia said in the ring after the win. “I’d love a rematch with Shawn Porter or Keith Thurman, or a fight with Errol Spence Jr. I'm back." 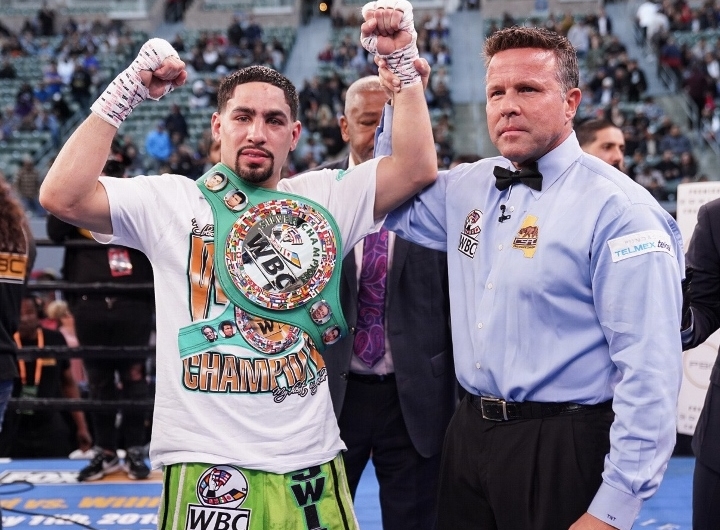 Garcia will likely receive another title shot, but he might not get it any time soon, and not because his opponents are afraid.

There are reports that Porter and Spence could meet in a unification bout in September. Porter was ringside to watch Garcia crush Granados.

Pacquiao is in need of an opponent after his win over Adrien Broner, but all signs point to Thurman getting the call for a summer showdown.

Despite the reports, Garcia’s PBC promoters hinted this week that Garcia could be in the mix for Pacquiao if he impressed on Saturday, which he did by dropping Granados three times and being the first man to knock him out.

Garcia’s first of three knockdowns came in the second round when he landed a devastating left hook.

"It felt good landing that big left hook,” Garcia said. “I was proud of my performance. I thought I did a great job tonight.”

Garcia was seen as the odd man out after losses to Thurman and Porter. With Thurman, Garcia started slow in a split decision loss two years ago. Versus Porter, Garcia failed to adjust against Porter’s smothering tactics.

Garcia is itching to redeem himself in rematches, but that likely won’t happen in 2019.

"I felt really good,” Garcia said. “I wasn't at my best the last couple of fights. This is the Danny Garcia that you're going to see for the rest of my career.”

[QUOTE=Eff Pandas;19685901]Yea I'd obviously agree Bud & Spence are a whole other thing, but I really didn't like his lack of effort, which honestly surprised me a lot. I don't think he was very comfortable at the weight regardless of…

Pac is gonna fight Thurman who beat ur ass.

Look at this cherry picker. He turned down $4M to fight PAC a few years ago. Now all the sudden he wants to fight him? Hopefully PAC will pursue bigger fish with titles like Thurman or Porter. I would like…

But you turned down Manny and Crawford lol