Danny Garcia got the tune-up fight he wanted, taking target practice and taking out Samuel Vargas with a seventh-round technical knockout.

It was all to set up a fight with Keith Thurman in March, though Garcia and Thurman had their own confrontation in the ring after this bout. That’s why this fight was happening — to give Garcia a chance to keep the rust off and to help set up the welterweight unification fight in early 2017.

Vargas was never going to be hard to hit, as quickly became evident in the first round. He played into Garcia’s hands — literally. Garcia continued to score in the second, and Vargas continued to come forward, an all-too-willing recipient who felt his only chance of winning was to absorb incoming fire on the way for a hopeful opportunity to unleash his own.

There is a big difference between firing shots and hitting your target. As the round came to an end, Vargas sent out two punches. Garcia ducked to dodge them, then came up with a big right hand. Vargas fell backward and performed a rear somersault. He listened to the referee count, taking as much time as he could to recover before rising. The bell then rang.

Garcia continued to bring roars from the crowd with flush punches in the third round, landing enough that Vargas for a time began to allow Garcia to come forward instead. But even when Garcia was the aggressor with his footwork, he still preferred to wait for Vargas to throw so that he could counter with faster and harder blows. 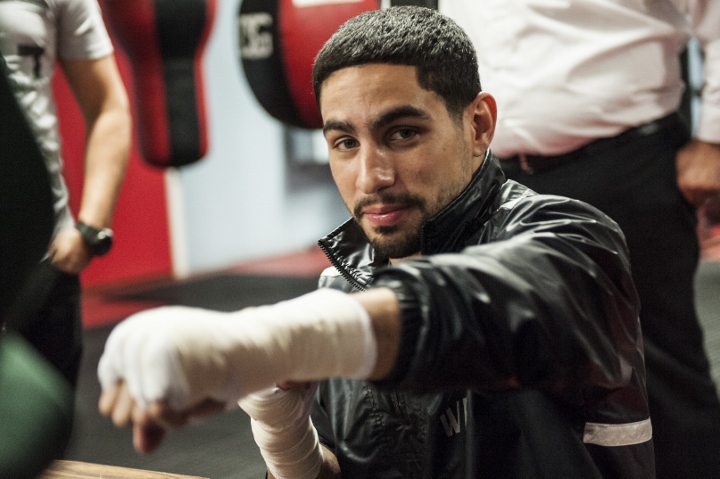 Garcia found plenty more opportunities to land. The shots began to take an increasing effect on Vargas. A right hand sent Vargas back a step in the sixth. Vargas shook his head and continued to come forward.

But in the seventh, the punishment added up and a Garcia barrage with Vargas on the ropes led referee Gary Rosato to jump in two minutes and 17 seconds into the round.

The former 140-pound champion moved up to the welterweight division in August 2015, stopping Paulie Malignaggi. He then outpointed Robert Guerrero for a vacant world title this past January. The Vargas fight was a non-title bout.

Afterward, he was asked about Thurman, who was working the broadcast for Spike TV.

The crowd cheered. And Thurman was in the ring, ready to retort and once again raise the insult of Garcia cherry picking his opposition.

“I’m a different caliber. I’m not no cherry,” Thurman said. “I ain’t no easy pickings, boy. Prove it, man.”

They then went face to face before being broken apart.

Thurman-Garcia is scheduled for March 4, either on CBS or Showtime.

[QUOTE=frantic fighter;17195373]This is all inaccurate Danny fought at 132 in the amateurs with Crawford and Mikey Garcia.[/QUOTE] [url]http://www.boxing-scoop.com/show_boxer.php?boxer_ID=679[/url] He moved up to 141

[QUOTE=frantic fighter;17195733]Just the weight portion, Danny fought 132 as an amateur.[/QUOTE] Where did I mention a weight portion?

[QUOTE=frantic fighter;17195373]This is all inaccurate Danny fought at 132 in the amateurs with Crawford and Mikey Garcia.[/QUOTE] What exactly is inaccurate? Garcia winning the under-19's in 2005? Or that he won the US national championship in 2006?

[QUOTE=IMDAZED;17195271]Idk if Shawn was the best. Garcia won the national champion for the under-19 and then won the regular one as well.[/QUOTE] This is all inaccurate Danny fought at 132 in the amateurs with Crawford and Mikey Garcia.