Frank Warren has declared that talks have started for a potential fight between Joe Joyce and Daniel Dubois.

The rising heavyweight contenders appeared on the same show last year after being linked with a bout for the British title.

Dubois beat Nathan Gorman to claim the belt at the O2 Arena in London back in July, exclusively live on BT Sport, while Joyce conquered American Bryant Jennings. 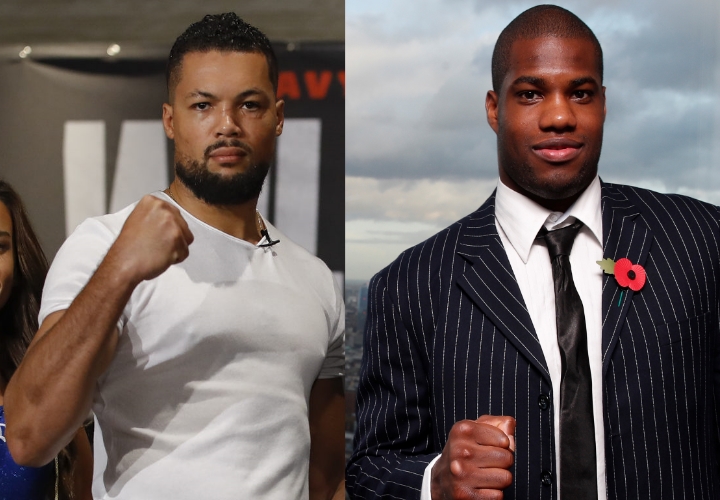 Warren, who represents both men, now appears eager to match them up after previously suggesting an April date for the meeting.

“[We are] delighted to confirm talks are underway for a huge domestic heavyweight clash in 2020,” read a tweet from the 67-year-old promoter’s official social media account. “Juggernaut vs Dynamite. Let’s make it happen.”

Dubois, 22, recently moved to 14-0 (13 KOs) with a straightforward second-round knockout of Japan’s Kyotaro Fujimoto at the Copper Box Arena in London.

Last year, ‘DDD’ also claimed the Commonwealth heavyweight title and even set his sights on the European crown.

Joyce had been set to face Marco Huck for the vacant continental belt on January 11 at the TUI Arena in Hannover, Germany, but the German was ruled out after suffering a hand injury.

After winning silver at the 2016 Olympics in Rio, losing out to France’s Tony Yoka via a controversial decision, the 34-year-old turned professional and, having left David Haye’s Hayemaker Promotions to join forces with Warren and Queensberry Promotions, now holds a record of 10-0 with nine quick in the paid code.

Further details regarding a potential showdown between Dubois and Joyce will be revealed in due course.

Maybe I overrate this guy, but I feel Dubois beats every hw not named Joshua, Deontay Wilder or Tyson Fury.

[QUOTE=famicommander;20302676]A draw with Povetkin is more impressive than anything Dubois has done by a country mile.[/QUOTE] Dubois hasn't been tested yet, that is true, but he also hasn't been beaten, or drawn with anyone. To be honest, I'm not sure…

[QUOTE=Angeljuice;20302442]Fury, AJ, Whyte, Dubois are all far more exciting than Hunter (who you have indeed deluded yourselves into believing is a contender). I watched the Usyk fight and have some advice for the man, *try blocking with your hands rather…

[QUOTE=juggernaut666;20302250]Kownacki lived in Poland for 6 years ,that doesn’t mean he’s representing Poland when he’s lived here majority of his life and is more New Yorker than anything else because that’s where he actually grew up, Wilder won a vacant…

[QUOTE=famicommander;20301202]The difference is, Americans aren't out here propping up Trevor Bryan as a legit contender. We know Wilder and Hunter are all we have at heavyweight right now and we don't have to delude ourselves into thinking otherwise like y'all.[/QUOTE]…