UFC President Dana White has erupted during a recent edition of the UFC Unfiltered podcast.

White is still steaming over last week's trilogy fight between UFC Hall of Famers Chuck Liddell and Tito Ortiz, which took place in Los Angeles - and the MMA pay-per-view was promoted by Oscar De La Hoya's Golden Boy Promotions, who are now venturing into the pay-per-view market.

Liddell, who is 48-years-old and in active since 2010, was viciously knocked out in the first round. 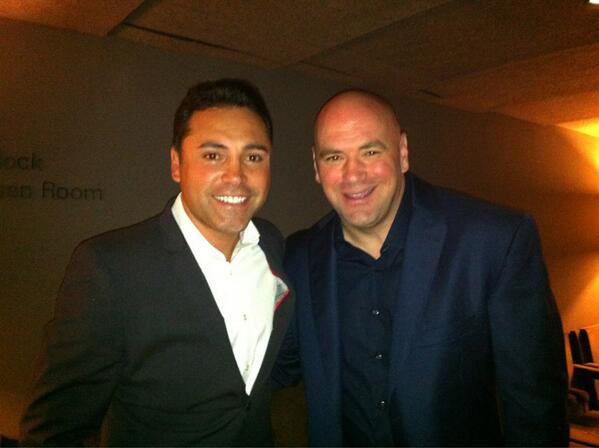 White made several attempts to persuade Liddell from going forward with the fight - pleading with the former UFC champion to remain in retirement.

De La Hoya, during an interview, made it clear that White had no place telling fighters when to retire.

That comment, combined with last week's outcome, sent White over the edge when discussing the entire series of events.

“Listen, I love Chuck Liddell and I don’t ever want to badmouth Chuck Liddell. People do think I’m badmouthing Chuck Liddell , but the reality is, first of all, lets says this first, I heard last week that the cokehead, ‘Oscar Del La Weirdo’ is talking sh*t, that I don’t have any place to tell guys when to retire. First of all, it’s called friendship you f***ing cokehead. I’ve been friends with Chuck Liddell for 20 years and the reality is that Chuck Liddell retired when he should’ve retired, eight or nine years ago whenever it was," White stated (transcript via MMANYTT.com).

“The problem is Chuck Liddell was a fighter, Chuck Liddell loves to fight and that’s his passion in life. But there comes a day and age. Fighting is a young mans’ game. He can’t do it and Oscar Del La f***ing Hoya says ‘oh come over to Golden Boy where we respect the fighters and it makes me sick what the fighters were paid’ and all this sh*t. Out of 14 fights on the card, five fights were amateur bouts which means they didn’t pay them jack sh*t

“12 of the professional fighters on the card made less than $3k and $3k. What are you talking about you cokehead junkie? Some of the guys made $1k and $1k and he says that he respects the fighters so much? He couldn’t even remember their names at the press conference.

"I hope someone talks Del La Hoya into fighting again, and I hope the State of California makes the fight, and I hope he gets knocked out just like Chuck Liddell did. In the first round. The cokehead nut ball. Tito and Oscar Del La Dummy were made for each other. Those two f***ing nut heads. First of all, Tito said ‘You guys want to get paid? Come over to Golden Boy MMA.’ Are you kidding me? Hey, you wait my brother, you wait to see how all this pans out. Everybody is going to be suing everybody in a couple of months. There was no money made over there. Del La Hoya is a moron. An absolute moron and I don’t know how Chuck allowed himself to get talked into this sh*t.”

Not sure why Dana is going off on DLH for being a cokehead, considering Dana has guzzled gallons of the stuff residually by blowing Jon Jones on the regular. Plus making every excuse possible to be able to bring him…

[QUOTE=Stop holding!;19301727]You're missing the point. Though 4m is quite a bit of money for the average person, he never got a piece of the pie, he only got crumbs from the overall pie.[/QUOTE] Yes he did. Its well known &…

Old Dana better shut the fùck up before Oscar whips his áss in a t-back under his pants.

I told Y'all UFC is Dying