This past Saturday, Sugar Promotions presented "FERIA de CAMPEONES", an eleven bout card from Aguascalientes, Mexico. In the 12-round main event, super middleweight Bruno Sandoval (20-2-1, 16 KOs), who recently signed with Sugar Promotions, picked up a first round TKO over Devis Caceres (28-9-3, 19 KOs) capturing the WBC Latino Silver Super Middleweight title in the process. A powerful right hook landed flush on the face of Caceres, ending the bout at the 2:50 mark of the first round, as Sandoval claimed the vacant title in style.

"It means a lot to have won this fight by knockout and the fact it was for a WBC title makes it even better," said Bruno Sandoval, who took the fight on late notice. "I am a complete fighter that can challenge anyone in my division right now! I am excited for what the future holds."

The co-main event saw Damien "Sugar" Vazquez (14-0, 7 KOs) pick up a ten round unanimous decision win over Luis Golindano (9-1, 6 KOs). The fight was close in the beginning as the two unbeaten fighters showed that neither wanted to taste defeat, but Vasquez began to pull away with his superior boxing skill as he claimed the WBC Youth super flyweight world title. Scorecards read 97-92 twice and 96-93, all in favor of Vazquez. 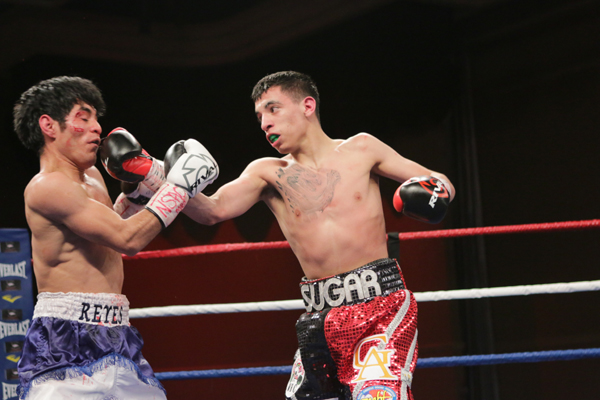 "I am overjoyed to have won this title and beyond that, I am happy to have been able to do it against a tough and hungry undefeated fighter," said Damien Vazquez. "My opponent was very talented and really brought the best out of me. I'm looking forward to my next fight as I march up the rankings."

Maryan Salazar (8-2) picked up a unanimous decision over Joselyn Casilla Martinez (4-3-1) to capture the WBC FECOMBOX light flyweight title. Salazar dominated this bout from start to finish to claim the title. Scorecards read 98-92, 98-91, 99-91 all in favor of Salazar.

"I have always wanted to win a title and to do it in my hometown of Aguascalientes, Mexico made it even better," said Maryan Salazar. 'I am very excited at what the future holds. My goal is to fight for a world title by the end of the year."

"I'm very pleased that all my fighters were victorious in Aguascalientes," said manager Greg Hannley of Prince Ranch Boxing. "The plan is to keep everyone busy as they position themselves to fight for world titles in the future."

"We had a great show for all the fans who attended." said Oscar Vazquez, CEO of Sugar Promotions. "Our plan is to come back in June with another great show here in Aguascalientes."