Rewatching Spence vs Porter the other day, Breadman. When the decision was announced, a thought occurred to me: This fight seemed like a case where the stock of both guys went up afterwards. Spence’s stock for winning and unifying and Porter’s for making him EARN it. What are some other fights where you thought both guys’ stock rose afterward?

Bread’s Response: In this era it doesn’t happen as often. But just recently Nonito Donaire raised his stock with a very good performance vs arguably the best fighter in the world.

Shawn Porter has never taken a bad loss. All of his losses are close competitive decisions as you mentioned. Speaking of Porter Yordenis Ugas raised his stock in loss to Shawn Porter. Many thought Ugas won that fight.

Historically…Bowe vs Holyfield 1. Duran vs Leonard 1. Leonard vs Hearns 1. I can go on all day about those type of fights back in the day. Today Boxing Twitter craps on fighters too much for a loss. Everytime a fighter loses they are “exposed”. It’s ridiculous. 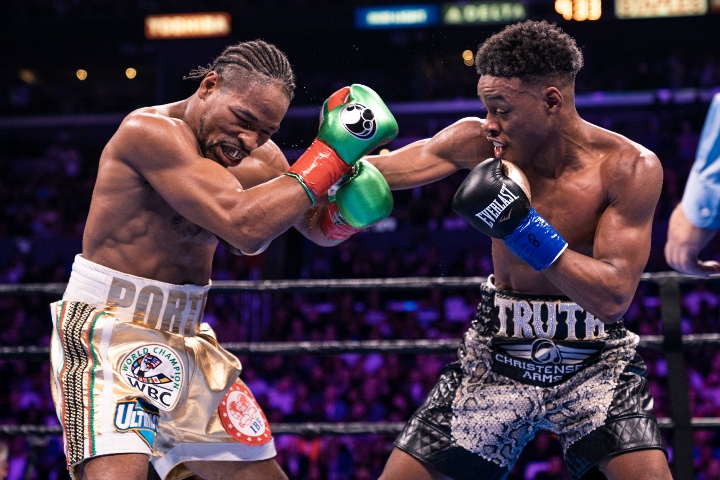 You’ve done a top ten list of the best pound for pound fighters of all time. Well, I would like to ask for another top 10 P4P list… with a slight twist. For the sake of this little experiment, let’s boxing was stopped (collapsed, outlawed, whatever) in the year 1950. All fighters retire and move on by that point. No Ali, no Four Kings, no RJ, no Tyson, no Holyfield, no Mayweather, and so on. Who would be the top ten best if the year 1950 was the cut off? Sugar Ray Robinson won the middleweight title the first time around in 1951, carving out one of the best middleweight resumes ever. If that never happens, is he still the GOAT? If not, who is? Who makes the list now if newcomers don’t come along and cut them off?

Bread’s Response: Great Question. I’m glad you brought up Sugar Ray Robinson and 1950. If that is the cut off I think the Robinson would still be the best but not sure if he’s the GREATEST. Winning the middleweight title 5x just cements his legacy as the best and greatest.

Also I want to point out. That Harry Greb’s emergence as a front runner for being the GOAT has enhanced lately. 20 years ago he was highly regarded but no one said he was the GOAT. In fact Benny Leonard, Joe Gans and Sam Langford were all considered greater until the recent Greb surge. I think the researchers looked at his incredible resume. And then cross referenced his opponent’s who we could see on film and it enhanced Greb.

If boxing stopped in 1950 Robinson would have been 121-1-2 with all of his blemishes avenged. Often times when in the moment we don’t realize the greatness we do in retrospect.

Looks like Davis and Redkach sparred last week and there was some foul play by Davis' team releasing a clip where he was battering Redkach. But how does all that work? Don't both teams agree ahead of time to not record? What if you are not supposed to record but do it anyways? How would you have handled this if it was one of your fighters involved?

On to some upcoming fights, how about a percentage breakdown of the following:

Bread’s Response: From what I could see whoever recorded the sparring was not sneaking. The angle was from on the ring apron. Now why it was released I don’t know. I can’t get into that.

I simply tell everyone in the gym, no recording. It’s really simple. If people have gym etiquette they won’t record unless it’s agreed upon. If we are paying for the sparring, we may record it for our film review but never releasing anything. If my guy is the sparring partner and they record it, I would hope they don’t release it.

I really think that this era is ruining it’s integrity by releasing sparring footage. If you notice the fighter who gets the better of it, is usually the one who is releasing the work.

The trainers have to have a respectful relationship which ascends to the other members of the teams. That’s the #1 thing. If both teams respect each other then this stuff doesn’t happen. And if it does it’s usually someone from the sidelines and not really a trainer or manager.

By the way these aren’t my predictions, I’m just giving you what the odds will be regarding who the masses think will win.

A blessed day 2 you bruh. thank you for answering my question about taking advantage of strengths/weaknesses. I was wondering if you could answer another 1 for me.

When a southpaw and orthodox fighter face each other, the tendency is to control the outside of the opposition's foot to get your power hand closer to the target n move the opponent farther away.  Because people look n train for this, is there any advantage to steppin inside the foot? I believe I seen Judah do this with Mayweather.

Again, blessings 2 you n your family.

Bread’s Response: I think having your foot on the outside in the southpaw orthodox match up is slightly overrated. Floyd Mayweather, Andre Ward, Roy Jones and Bernard Hopkins are some of the best right handed fighters ever at fighting southpaws. They all move towards their rights, towards their opponents left. Watch their fights vs southpaws closely.

Monster Inoue just scored a sensational ko of a very good southpaw in Juan Payano…  his foot was on the inside of Payano’s lead foot. Pac gets that straight left hand knockdown vs Barrera, Mosley and Algieri from inside angle. Antonio Tarver would let fighters get to outside and shot his left hand right up the middle.

I’m not saying being on the outside of the lead foot is non factor. Especially when the southpaw is left hand dominant. Like Adonis Stevenson. Badou Jack kept turning him on the outside and it worked. But in my opinion it’s really 50/50 on which way you should go. Southpaws are sort of used to right handers going outside on them. So they adapt.

I love how you broke down your top coaches. I have a question about some coaches from neck of the woods. The big state of Texas. You mentioned Derrick James and I do think he’s good but his fighters have poor defense. Spence and Charlo both get hit way too much in my opinion. James believes in moving the feet and not moving the head. What are your thoughts on that? Also what do you think of the OG Ronnie Shields as a coach? He lost Little Charlo and Lara but he has Big Charlo and a host of other guys. He seems very consistent.

Bread’s Response: Ronnie Shields is most likely a HOF trainer. He’s been around at the top level for about 30 years. That’s lifetime achievement right there. I think Shields is excellent. He gets overlooked because he’s such a quiet unassuming guy. But he’s the real deal. I think he’s done a really good job with both Charlos and Lara. Just because fighters have left him that doesn’t mean anything to me. Fighter’s minds are very complicated to dissect.

I like Derrick James because his fighters are well conditioned. They throw the same punches on the pads they throw in real fights. And they believe in James. That’s very important. You can send a fighter to hell to fight the DEVIL if he believes in you. James has turned Jermell Charlo into a come forward aggressive puncher. Charlo used to be a stick and mover. Watch his earlier fights. When you change a fighter’s style and they still win and they carry out your game plans under stress it says a lot about their belief in you, because every arm chair expert can criticize a gameplan. Charlo lost a fight. He had two tough fights with Harrison. But he stayed steadfast. That tells me a lot about his belief in Derrick James.

I never heard Derrick James say he doesn’t believe in head movement. At least I don’t recall it anyway. But I would have to see what context he said it in. As for Charlo and Spence’s defense that’s interesting. Here is my take. Often times reflexes are something you are born with. A guy like Wilfred Benitez is born with those reflexes. They can be enhanced but he’s born with that.

Spence and Charlo don’t have great defensive reflexes. That’s not on James. He’s not God. But they do keep their hands up and they stay in punching position. They also have shown good chins. Most offensive fighters aren’t great defensively. Most guys who attack can be hit. So while neither is what I would call a great defensive fighter, I can’t blame the trainer for that. I don’t think that’s fair. Their defenses aren’t horrible. It’s just not as good as their offense.

Condolences to brother Naazim's family, friends and colleagues that knew him throughout the boxing world.  As a fan observing his interactions with the fighters you just knew he was the genuine article.

Nothing but respect for a man that clearly was as dedicated to his fighters as he was to his craft.

Bread’s Response: Brother Naa is what I called him. He was my old head and I don’t use that term lightly. Naazim had a leadership and charisma about him. When he talked everyone listened. He used to stop everyone in the gym and play this team medicine ball game where all of the fighters would get into the ring at once. It was so cool. I’m talking world class fighters and world champions literally playing a game with kids.

I had a personal relationship with Naazim. We talked often. In fact he was the first trainer in Philly who embraced me when I started training fighters. He was just nice to me and he showed confidence in me as a trainer. This is animalistic sports and Philly is not a warm place. But I will always appreciate him for that.

After Jrock lost to Charlo, Naazim was the last person in the dressing room. He was there alone. After Jrock beat Jarrett Hurd he was there again. It was surreal. Same guy. Same confidence.

In fact leading up to the Hurd fight. He asked me was I comfortable with the fight. I told him yes but I was short with him because I was zoned out. I don’t like hearing anyone’s game plan etc because I don’t want it to effect my outlook on the fight.  I try not to be accessible to people before a fight. So a few days later he called me and said I apologize if I upset you. I was like no way Naazim. You would never upset me. You’re my old head, I respect you.

But that’s just how he was. He was like an Ambassador of Goodwill in Philly boxing. He was very positive and he made average fighters feel like great fighters. He talked everyone UP. He was a the Stand Up Guy in a business full of back stabbing snakes. I’m going to miss him.

There is not debate on this one. My favorite was the connection of Bread and Naazim. That connection is a beauty and rare in these days. Is going to be difficult to see someone special like Naazim, Rest In Peace.…