Bob Arum and Terence Crawford respectfully disagreed Thursday when it was suggested to them that there isn’t much left for Crawford to accomplish at 140 pounds if he defeats Felix Diaz next week.

Crawford made it clear he is in no way looking beyond Diaz, who’ll challenge Crawford for his WBC/WBO super lightweight championships May 20 at Madison Square Garden (HBO). Crawford acknowledged, though, that he wants to face Julius Indongo in what would be a rare full title unification match in his following fight. 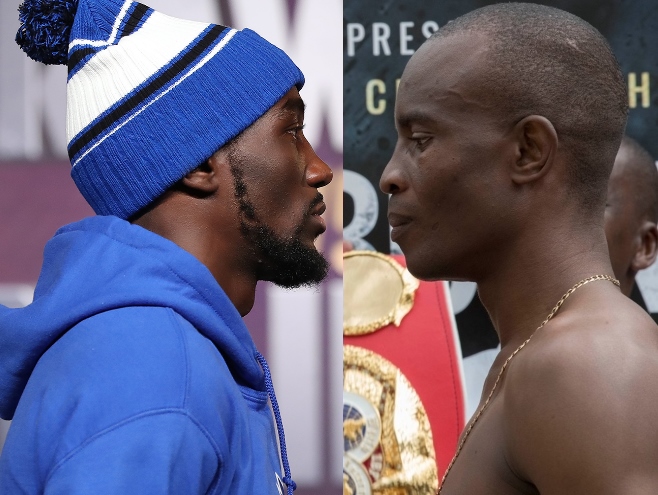 Arum wants Crawford to fight three times this year and suggested he could return sometime in the summer if he defeats Diaz (19-1, 9 KOs), a 2008 Olympic gold medalist for the Dominican Republic. Crawford and Arum also discussed the opponent that has long eluded Crawford, but it doesn’t seem as though a Crawford-Manny Pacquiao fight is any closer to happening than it was last year.

Indongo, meanwhile, has moved to the top of Crawford’s wish list.

“He’s a good fighter, this guy [Indongo],” Arum said. “That’s a guy that people haven’t heard of because he hasn’t fought in the United States. But our matchmakers say he’s a damn good fighter. And apparently, [he’s] looking forward, down the line, to fight Terence. … There is this kid that’s coming on, that’s a very, very good fighter, that I think holds two titles now at 140. That’s a good possibility.”

The 34-year-old Indongo added the WBA title to his collection April 15, when he soundly out-boxed Scotland’s Ricky Burns (41-6-1, 14 KOs) in Glasgow. Indongo introduced himself to fight fans worldwide when he needed just one right hand and 40 seconds to win the IBF and IBO championships from Russia’s Eduard Troyanovsky (25-1, 22 KOs) on December 3 in Moscow.

“I watched the fight,” Crawford said. “He put on a great performance. He did everything he had to do to get the job done. He’s tall and rangy, he can box. It’d be a good fight.”

[QUOTE=Kigali;17667333]Damn He just got to 140. Why isn't GGG mandated to move up???[/QUOTE]GGG's cash cow was at a lighter weight. Crawford's big money fights are guys at a higher weight (with the exception of Mikey Garcia). GGG did have an…

[QUOTE=larryxxx.;17666687]who said these things?[/QUOTE] Cant remember exactly who but it was an article regarding Bud's next opponent a while back and I just remember reading.

[QUOTE=jonnyc420;17666652]Oh yeah mainly the Haymon fan club on this site. Supposedly Diaz is the boogeyman at 140-147. He is very good but Crawford just on that next level.[/QUOTE] who said these things?

[QUOTE=Hatesrats;17666045]Is there actually people claiming "Bud" was ducking Diaz... lol[/QUOTE] Oh yeah mainly the Haymon fan club on this site. Supposedly Diaz is the boogeyman at 140-147. He is very good but Crawford just on that next level.