Terence Crawford was watching as Canelo Alvarez routed Callum Smith to win a pair of super middleweight world titles on DAZN on Saturday night at the Alamodome in San Antonio. But besides the main event, Crawford also watched with interest when fellow welterweight world titleholder Errol Spence Jr., who was ringside, was brought on for an interview earlier in the broadcast.

Spence, who was two weeks removed from retaining his unified 147-pound belts by unanimous decision over former world titlist Danny Garcia, was on hand to watch Alvarez. He hopes to someday fight Alvarez by moving up two weight classes to fight him at middleweight, where Alvarez still holds a world title. It would, of course, be a major fight, especially at AT&T Stadium in Arlington, Texas, right outside of Dallas. Spence is from region and a draw and Alvarez has a huge following in the Hispanic community.

But Spence is currently a welterweight and the biggest fight in his own division is obviously a much-talked about showdown with Crawford, who a month ago knocked out former titlist Kell Brook in the fourth round. Spence won his first belt from Brook by 11th-round knockout in 2017.

Naturally, DAZN’s ringside reporter Chris Mannix asked Spence about the prospect of facing Crawford, something he has been asked about repeatedly for the past couple of years.

“I think it could happen. We have to see how it goes,” Spence said. “(Manager) Al Haymon and (Crawford promoter) Bob Arum need to sit down, and for Bob to stop lying. We'll see. It definitely could happen next year. We just have to sit down and talk and go over the numbers and things like that.”

Then Spence added something that really got Crawford’s attention.

Soon after, Crawford tweeted his response to Spence’s demand for the larger share of the purse. “And they said it was me. I rest my case now, on to the next. That chapter is now close,” Crawford wrote. 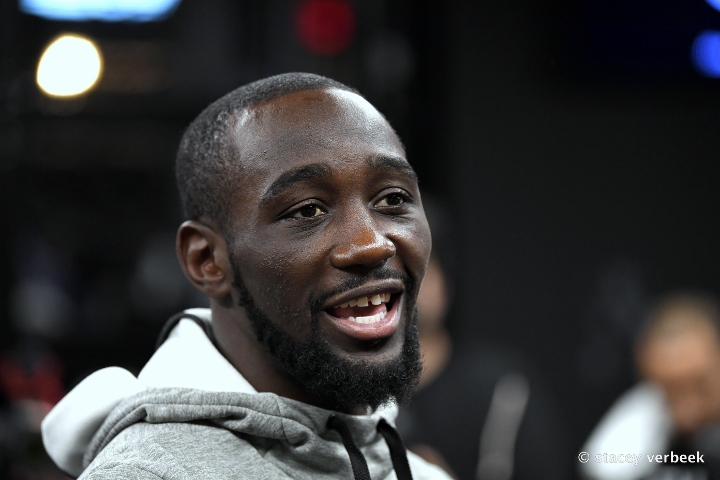 On Monday, Crawford spoke to BoxingScene and got into more detail about his thoughts on what Spence had to say as well as the rampant speculation that he will leave Arum’s Top Rank when his contract expires next October and sign with Haymon’s rival Premier Boxing Champions, which represents Spence, to facilitate one of the most significant fights that can be made and one between two of the world’s top fighters pound for pound.

Crawford said he was not at all offended by Spence’s remarks about the purse split or the derisive comment that he should take “whatever we give him.”

In fact, Crawford laughed when reminded of Spence’s comment.

Is he desperate for the fight?

“Hell, no. I’m in a good place in my life right now. I’m having fun with chilling out, having kids and enjoying my kids,” said Crawford, whose wife gave birth to their sixth child, a girl – Trinity Michele Crawford – last week. “I don’t worry about things I can’t control. I mean, like everybody always got an opinion and I just a laugh at a lot of people’s opinions that said I haven’t fought anybody.

“I just laugh like this guy, he’s on his high horse. Maybe that wreck knocked a couple of screws loose.”

Crawford was referring to the horrific one-car accident that Spence miraculously survived with only minor injuries 14 months ago and for which he was charged with DUI.

“That’s the way he wanted to say it at that point in time,” Crawford said of Spence’s ‘whatever we give him’ comment. “Those were his words and sometimes you can’t take your words back. I’m laughing at it. I’m not offended or anything. It’s laughable to me to be honest. It’s something you laugh at. This dude is funny. It’s laughable.

“That’s on him. That’s how he feels. Listen, if (the fight) happens it happens. If it don’t, then it don’t. I don’t know what he’s gonna do or what his plans are so I can’t speak on it. He got something else on his agenda, obviously.”

Spence (27-0, 21 KOs), 30, of Desoto, Texas, has said many times he wants to fight Crawford (37-0, 28 KOs), 33, of Omaha, Nebraska. A few weeks before he fought Garcia, Spence told BoxingScene, “I don’t want to leave the division without fighting him because I don’t want that on my legacy -- people saying that’s the fight that never happened. Crawford is the most intriguing fight. That’s the legacy fight. I feel like that’s the biggest money fight out there for me too, so it would make sense for it to happen.”

Crawford, who declined to offer his opinion on what the purse split would have to be for a fight with Spence to be made, was reminded of Spence’s comments about it being a legacy fight.

“Talk is good. I don’t know what him and his team’s agenda is. So, you know, I can’t speak on it,” Crawford said. “They got something else I guess they’re working toward. I already stated everything I needed to say in the past. I don’t think it’s necessary for me to keep saying the same thing over and over and over. I think that everybody gets who I want to fight.”

Crawford, who said he was flipping between Showtime’s boxing telecast and the DAZN card on Saturday night, figured when Spence was brought in for an interview he would be asked about a fight with him.

“You already know that’s gonna be question that comes up any time I’m interviewed or any time he’s interviewed,” Crawford said. “I don’t take is as nothing. You get tired of that same old ‘when are you and Errol fighting’ (questions). I know he’s tired (of being asked), ‘When you going to fight Terence?’ I don’t care about what other people ask him or what his reply is.”

Crawford said he hopes to be back “in the ring shortly” and that he hopes he can fight more than the one time he did this year because of the coronavirus pandemic.

“I’d love to be in there more than once this year like I used to be but at the same time it’s great I even had a fight this year because I know some fighters didn’t even get the chance to fight this year or they had to take a massive pay cut,” Crawford said.

Crawford also tamped down the notion that there is tension between him and Arum over remarks Arum made around the Brook fight. Arum said he is losing money on Crawford fights; that Crawford needs to be better with the media and do a better job of bringing attention to himself and his events; and that Crawford hampered the promotion of the Brook fight by delaying signing the contract for weeks even though everything was agreed to.

“Not really,” Crawford said when asked about if there were any issues between him and Arum. “Bob hasn’t said nothing to me direct. I saw him do a couple of interviews, but that’s Bob. He’s entitled to say how feels and say what he wants. I’m entitled to feel how I feel and say what I want. But the difference between me and him is if I got a problem with someone I’m gonna take it up with that someone.

“It’s a lot of things that are untrue what’s being said that I don’t like. But I’m not gonna elaborate on it. I’ll let them save face.”

As for chatter that he plans to leave Top Rank for PBC when his contract is up next fall, Crawford dismissed it.

“That never came out of my mouth nor did I every say anything like that. That’s the crazy part,” Crawford said. “There’s a lot of things going around that’s untrue. If you haven’t heard me say it then you know that’s it.

“I never said anything about leaving Top Rank or signing with PBC or anything. I never said anything. I’ll tell you like I told everybody from the jump – I’m with Top Rank right now. That’s my promotional company. In the future? Who knows what the future may hold. When that time comes around we can revisit this conversation about that. Until then I’m still signed with Top Rank.”