According to ratings released Tuesday by Nielsen Media Research, an average of 965,000 viewers tuned in to watch an ESPN telecast Saturday night that featured Terence Crawford’s demolition of previously unbeaten Julius Indongo.

Crawford (32-0, 23 KOs) knocked out Indongo (22-1, 11 KOs) in the third round after landing a perfect, paralyzing left hand to Indongo’s body that left the Namibian southpaw flat on his back, unable to get up at a Crawford-crazed Pinnacle Bank Arena in Lincoln, Nebraska.

Crawford’s impressive performance made him boxing’s first fully unified world champion in any weight class since Jermain Taylor beat Bernard Hopkins by split decision in July 2005 to win the IBF, WBA, WBC and WBO middleweight titles. The Omaha, Nebraska, native defended his WBC and WBO 140-pound titles and won the IBF and WBA championships from Indongo. 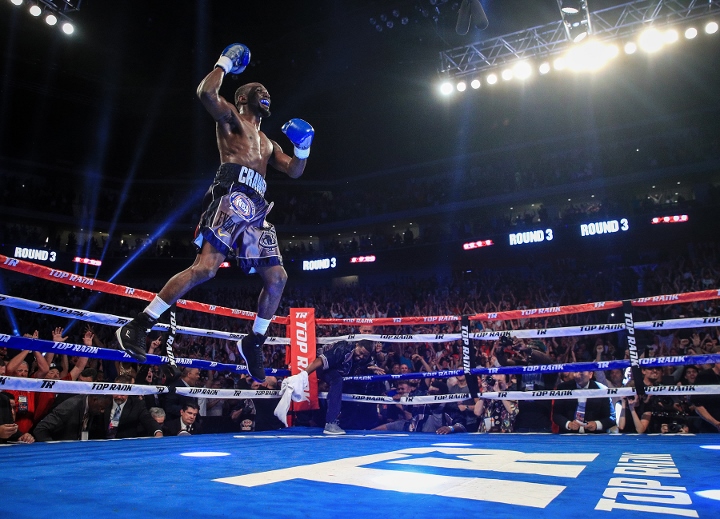 The undefeated Crawford’s previous performance – a one-sided, 10-round technical knockout of Felix Diaz that HBO broadcast May 20 from Madison Square Garden – averaged 961,000 viewers and attracted a peak audience of 1,036,000. Peak viewership for ESPN’s broadcast of Crawford-Indongo wasn’t available Tuesday, but the audience wasn’t afforded much time to build because Crawford knocked out Indongo so quickly.

The undefeated Crawford’s previous performance – a one-sided, 10-round technical knockout of Felix Diaz that HBO broadcast May 20 from Madison Square Garden – averaged 961,000 viewers and attracted a peak audience of 1,036,000. Peak viewership for ESPN’s broadcast of Crawford-Indongo wasn’t available Tuesday, but it is believed to have exceeded one million viewers during the Crawford-Indongo fight.

While the Crawford-Indongo ratings from Saturday night were solid, the average viewership didn’t represent the significant spike one might’ve expected for an attractive fight that was available to millions more viewers than Crawford’s victory over Diaz. ESPN, a basic cable channel, is available in roughly 87 million homes in the United States, approximately 55 million more than HBO, a premium cable channel.

The Crawford-Indongo ratings were, however, markedly higher than Top Rank’s previous ESPN telecast.

The main event of that show, WBO super featherweight champion Vasyl Lomachenko’s seven-round domination of Colombian contender Miguel Marriaga on August 5 in Los Angeles, drew an average audience of 728,000. Ratings for that show likely were adversely affected because the Pro Football Hall of Fame induction ceremonies ran long that night on ESPN, the start of the telecast switched to ESPN2 and the Lomachenko-Marriaga match didn’t begin until roughly 12:20 a.m. ET.

Lomachenko’s prior performance – a nine-round, one-sided stoppage of Jason Sosa on April 8 in Oxon Hill, Maryland – was watched by an average of 832,000 viewers on HBO.

EDITOR’S NOTE: This story was updated to reflect that 965,000 viewers watched the entire ESPN telecast Saturday night, not just the Crawford-Indongo fight.

1.1m peak for HBO would be very good for unification 4+belts but for ESPN it is decent at best.

The Numbers are so f.ucked it's tough to give a definite answer But Buds figt against Diaz did better #s and was available in some 50 million less homes then his fight with Indongo. That's not good no matter how…

I don't think it has much to do with the fighters and more to do with cable subscriptions declining. I bet a lot of people streamed the fight. I would be cool to see a card featured exclusively on YouTube…

They had no promotion. I feel like boxing fans don't even know when a fight is happening until fight week. It would be nice to see a fight with a good co-feature to match it.