ATLANTIC CITY -- This past Saturday, welterweight Thomas LaManna won an eight-round unanimous decision over veteran Carlos Winston Velasquez that headlined a card at The Claridge Hotel in Atlantic City.

LaManna dominated the action with power shots that he landed behind a long jab throughout the contest.  Velasquez was game as he took a lot of shots and landed an occasional power shot.  LaManna sealed the deal in the final round when he landed a flush 4-punch combination that put Velasquez on the canvas. 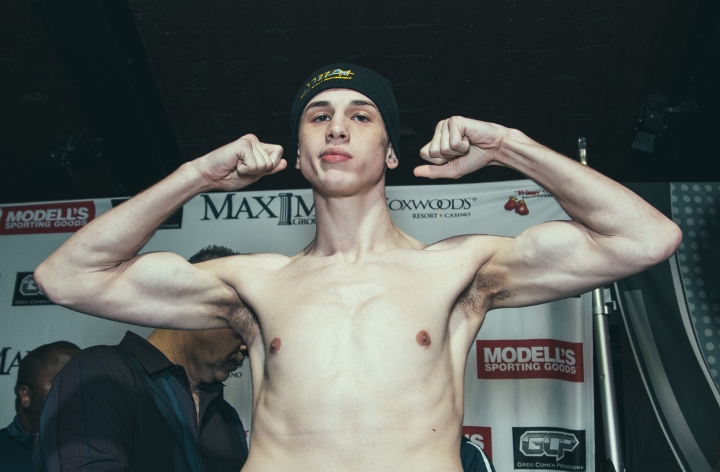 "Velasquez was tough and durable,"said LaManna following the fight.

"I needed this fight, and now I would like to fight Kermit Cintron if he should win his fight with Tyrone Brunson on June 24th.  Maybe he will stop ducking me,  I want to fight a big name like Cintron, Zab Judah or a rematch with Dusty Harrison.  We at Rising Promotions will be back here at the Claridge on August for our 9th event."

Young was extremely active as he landed hard combinations with Sosa landing an occasional hard shot to the head.

Chris Thomas and Oscar Valdez battled to a four round majority draw in a middleweight contest.

Gabriel Pham won a six round unanimous decision over Edgar Perez in a light heavyweight bout.

Tomas Romain won a four round unanimous decision over Lamont White in a lightweight bout.

Elijah Vines remained perfect with a 3rd round stoppage over Harry Tyrone Paige in a scheduled four round junior middleweight bout.

Vines of Philadelphia is 4-0 with 4 knockouts. Paige of Batesville, ARK is 0-5.

Frederick Julan stopped Jose Valderrama in the 6th and final round of their light heavyweight bout.

Julan of Brooklyn, NY is 5-0 with three knockouts. Valderrama of Manati, PR is 5-20.

Dan Pasciolla and LeMarcus Tucker battled to a majority draw in a rematch of Heavyweights.

In round one, Pasciolla began to bleed from his nostrils.

I forgot all about Cornflake!

Cornflake is dishing out ass whippings. Who's next? :boxing:

[QUOTE=rrayvez;17753993]This cornflakes dude is a warrior. He wants the very best welterweights 2006 has to offer.[/QUOTE] Kermit cintron is #1 rated in the USBA. Zab Judah is still a decent fighter and still dangerous. Dusty Harrison won a bull**** unanimous…