Cook: Once Munguia Feels My Power, He'll Change His Style Up

The Canadian contender feels he has more power than England’s Smith, who lost a unanimous decision to Mexico’s Munguia on July 21 in Las Vegas. Unlike Ali, Cook knows he is a full-fledged junior middleweight, someone Munguia won’t be able to overwhelm when they square off on the Canelo Alvarez-Gennady Golovkin undercard September 15 at T-Mobile Arena in Las Vegas.

The 21-year-old Munguia (30-0, 25 KOs) is a 14-1 favorite over the unknown Cook (20-1, 13 KOs), who can completely change his life by knocking off one of boxing’s rising stars. The 32-year-old Cook, of Ajax, Ontario, was respectful of Munguia during a conference call Wednesday, yet exuded confidence regarding the biggest opportunity of his seven-year pro career. 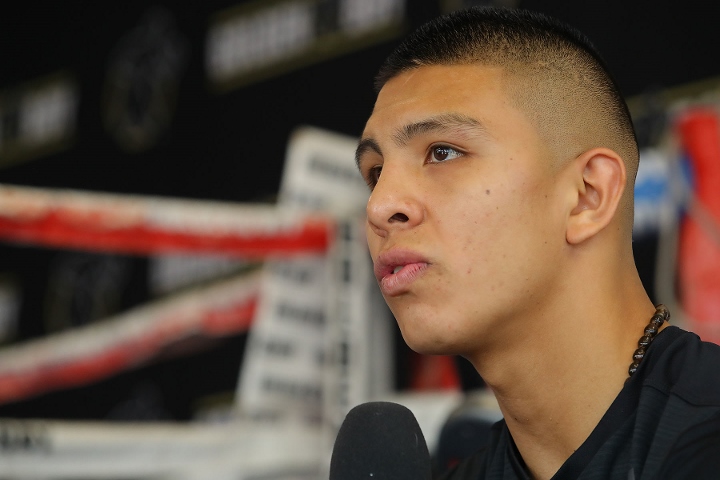 “What I see is that when he gets somebody hurt, he tries to take their head off,” Cook said. “His offense is pretty much his defense. He comes forward and he throws bombs, right? He’s a tough kid. He throws everything into every punch. I’m sure he says that he’s gonna try to change that a little bit, but I know I’ve gotta keep my hands up tight, I’ve gotta be smart in there and I think once he feels my power he’ll probably change his style up a little bit. I watched the Liam Smith fight a couple times and Smith hit him a ton of times. But obviously Smith didn’t hit him with too many good, clean punches.”

In his previous fight, Munguia dominated Brooklyn’s Ali (26-2, 14 KOs). The tough Tijuana native dropped Ali four times on his way to a fourth-round stoppage that won him the WBO 154-pound championship May 12 in Verona, New York.

“He pretty much rolled Ali over,” Cook said. “I think Ali’s too small for Munguia. Jaime looked way bigger than him. Size makes a big difference, too. I’m sure he’s gonna come in like close to 170 pounds fight night. And for me, I’m probably gonna come in close to 168ish, too.

His own power was one of the attributes that convinced Cook to take this difficult fight on just five weeks’ notice.

“Growing up, man, anytime I hit somebody they’d always drop. I’ve been in a ton of street fights,” said Cook, whose July 28 fight against Kell Brook was canceled due to Brook’s ankle injury. “That’s what got me into boxing, obviously. I know how much power I have. You just don’t develop power. You’re born with power, and I was born with it. I might not have been born with the best boxing skills, but I’ve learned a lot over the last [seven years]. I turned pro in 2011. I’ve learned a lot about how to box now.

“I’ve just gotta stay smart, like I said, and throw my punches. I know how hard I hit and if I can hit him square on the chin, like I did to [Steven] Butler or anybody else I hit, they’re gonna feel it. And no offense to Liam, but I think I hit harder than Liam Smith. So we’re gonna see what happens when it comes next Saturday night.”

Liam Smith is much better than Cook

Munguia will slice him up early & continue to pound on him until the ref stops the beating.

When someone has big power, he doesn't tell us about it, we see it. It's his calling card, he's known as a KO artist. Cook started boxing late, he might have shot his load KOing homeless bums in the park,…

Cook is a tin can. In the end, Munguia and the winner of Spike/Lemieux are years worth of future showcase fights for Canelo at 160. There is an outside chance he'll fight Hurd at 160 but only if forced and…