It was the perfect ending to the first chapter of Mick Conlan’s professional boxing career and he agreed.

Fighting at home in Belfast in front of a packed house at Falls Park in August, Conlan improved to 12-0 as a pro with a ninth-round stoppage of Diego Alberto Ruiz, and with spots in the top 15 of all four major sanctioning bodies, it was clear that the Irishman was ready for the next step in terms of competition.

Then an old foe returned to the scene.

Just 3-0 as a pro, Vladimir Nikitin was supposed to be Conlan’s opponent in Belfast before an injury took the Russian out of the fight. But having healed up and given the green light to fight, the man Conlan may always be connected with in one way, shape or form was selected to face his old amateur rival at Madison Square Garden this Saturday night.

In other words, put that chapter closing on hold.

“I didn’t think he’d be back in time from injury, so I put it (fighting Nikitin) to bed and made peace with it, and I still have, if I’m honest,” said Conlan. “But he’s still gonna be the opponent on December 14th, so I’ve just got to focus again and readjust.”

What Conlan made peace with was the idea of never getting a third crack at the man who beat him twice in the amateurs, the first time in 2013 and the second in the quarterfinals of the 2016 Olympics. It was that second fight that made Conlan a household name thanks to the larcenous nature of the decision that went Nikitin’s way and the Belfast native’s reaction to it, as he shot middle fingers into the air in a raw moment of emotion.

Nearly four years after the Rio Olympics, Conlan and Nikitin have gone their separate ways and had success, but here they are again. It’s a promoter’s dream thanks to the storyline, and while Conlan realizes that fighting under pro rules six years after their first meeting means that they are not the same fighters, hearing Nikitin’s name will always produce certain feelings in him.

“It (getting motivated for this fight) has come real easy because it’s not like the wins were ten years ago,” he said. “The first time he beat me was 2013 and even then I thought I won that. And the last time he beat me was three years ago, so it’s very fresh in my memory. I know how he reacts when he wins and I can remember how he carried on. I remembered the noises he made when we were in together and I was hurting him and he was wincing and yelping. So with Vladimir Nikitin, everything is very fresh and it was very easy for me to drop back into the mindset of, okay, this guy beat me twice, it’s not like he beat you when you were ten; he beat you when you were a man and an elite amateur, so you’ve got to go out and prove a point.”

There’s also a point to be proved by the 29-year-old Nikitin. For years, he has been described as the fighter who shouldn’t have received the decision in Rio, the poster child for the sad state of judging and / or corruption in amateur boxing. Saturday night, he can upset Conlan’s applecart again and prove that he deserved those amateur wins because he was the better fighter all along. For Conlan, a young man who always sees the big picture, this is another reason to take this fight very seriously.

“I know how he is as a fighter,” said Conlan. “He’s really aggressive and I’ve seen people in the past who we’ve expected to come in aggressive and try to attack us and they haven’t, but with Vladimir, we know he is because he’s done it twice before. And it is nice to have this kind of fight in preparation for whatever the big fights are next because no matter what anybody says, this guy’s got a gripe with me and he’s the guy whose career is remembered for getting the decision over me, so he has as much to prove here as me.” 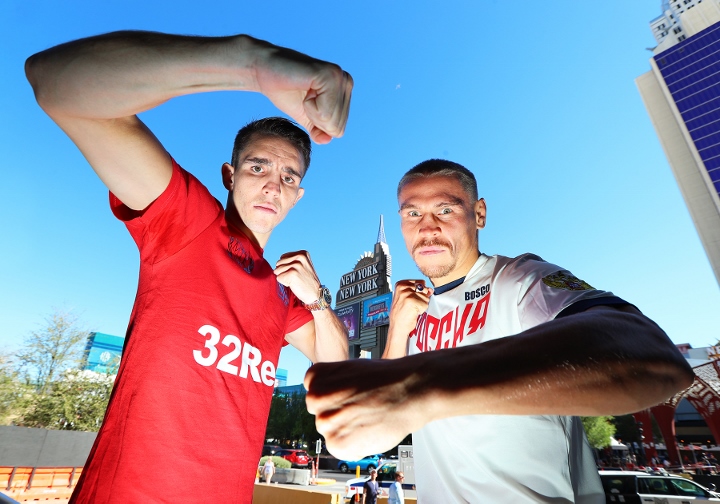 That means we may have a scrap to remember in the Big Apple, a place Conlan knows very well, having fought five of his 12 pro bouts in NYC.

“In pro boxing, New York is my home, really,” he said. “It’s the place I’ve boxed most, and it’s so fitting for this fight to actually be in New York. Yes, it would have been amazing for it to be in Belfast; that would have been special. But it’s even more special being in New York because this is where I began the new chapter of my career and left the amateurs and restarted after that defeat to Vladimir and now I get to close the book on that and put it all to bed.”

So maybe this is the close to the first chapter after all. And if that chapter has a happy ending, it will be off to 2020 and the real big fights as he closes in on a shot at a world title. Conlan knows what’s coming and he’s eager to test those waters, but he’s not naming names when it comes to championship targets.

“You look ahead and see who’s there, but I don’t pay no attention yet,” he said. “I obviously watch and see what’s going on and how people are moving, but I’m looking right ahead of me, and that’s Vladimir Nikitin. But I know when my chance comes, I don’t need to name no names because every time someone mentions someone, it looks like I’m calling them people out, but that’s not my game and I’m not about that. I’m not a trash talker. But when my day comes with any of the champions, I believe I will be successful.”

That doesn’t mean Conlan will hold his tongue when attacked or when he sees something he needs to speak out about, so when the WBC gave JC Martinez and Rey Vargas each a pass after both tested positive for Clenbuterol, claiming that the amounts of the substance were consistent with ingesting contaminated meat, Conlan took to Twitter to voice his displeasure with what he believed was a bad precedent to set.

It was the kind of statement more top-level boxers need to make because this isn’t baseball, where performance enhancers can help someone hit the ball a longer distance. In boxing, it could be a matter of life and death. And as a father, Conlan is well aware of the risks being taken when it’s a level playing field, let alone one that’s not so level.

“It’s not something I give much attention to while I’m training, but when you see the headlines and people passing away in boxing and you think about what is actually going on in the sport, and how many people actually could be doping, it is scary,” he admits. “I know I’m a clean guy; I know that I’m not taking anything. I put my hard work in the gym and I’m an honest person, so I never had any interest in cheating. Then you see the rulings the WBC just made and I still think that’s bulls--t. They should know better. It’s a very dangerous lane the WBC are going to go down because it opens doors for people to get away with doping or have excuses why they’re doping. What the WBC and all other governing bodies should do is have 365-day a year random drug tests for the top 20. I know it’s going to be very expensive, but boxing’s in a place at the minute where it hasn’t been in a long time. There’s a lot of money in boxing, so why can’t we invest in the anti-doping schedule?”

Conlan knows all about testing from his amateur days, even noting that he was tested four times in one week back then. And yes, that’s inconvenient, but it also puts a note in your head to not even think about going down the PED route.

“It wouldn’t cross my mind about cheating because I’m so used to being tested,” he said.

If Conlan gets to the heights he wants to in this sport, his already large platform will get even bigger, allowing him to perhaps make a mark that goes way beyond what happens on fight night.

“I would be honored if I could do that for the sport and call that kind of stuff out,” he said. “Cheating is not in my DNA. If I was to ever fight a drug cheat, I’d be confident in myself no matter what. They can take as much drugs as they want, but if something ever happened and it stopped me from winning something, I would still be happy with being the guy who called it out and stayed clean.”

That’s as big picture as it gets, but Conlan still knows that he has to micromanage a bit and focus on one night in New York City this Saturday. And with that focus, he knows he’s going to be in a fight with one Vladimir Nikitin.

“He fights like a dog and he is a dog when he’s in there,” said Conlan. “He tries to win and he’ll be there trying to take my head off. So it’s the perfect kind of fight. It isn’t somebody who’s top ten, but it is someone who’s really trying to take my head off. And the way I’ve approached this one is, everybody here thinks it’s a foregone conclusion where I’m gonna go in and win, and win comfortably. And that might be the case but, at the same time, if we look at the past and me and Vladimir Nikitin, his hand has been raised both times we’ve faced each other, so I’ve got to approach it as the underdog and go in there with a lot to prove and something to close the door on.”

And should he close that door and leave Nikitin in the past?