Much like her last experienced, unbeaten opponent, Claressa Shields doesn’t consider Tori Nelson any match for her Friday night.

The two-time Olympic gold medalist is confident she’ll break down Nelson and stop her challenger in a scheduled 10-round, 168-pound title fight that’ll headline a “ShoBox: The New Generation” telecast from Turning Stone Resort Casino in Verona, New York. The 22-year-old Shields (4-0, 2 KOs) will make the first defenses of the IBF and WBC women’s super middleweight championships she won by stopping then-undefeated Nikki Adler (16-1, 9 KOs) in the fifth round of her last fight, August 4 at MGM Grand Detroit.

“And I think that she’s gonna be in a world of trouble the more aggression that she brings to me. But I think by the fourth or fifth round she’ll be gun-shy and she won’t wanna take any more punches. She’ll be covering up and trying to figure out what to do.”

Though undefeated (17-0-3, 2 KOs), Nelson is 41, nearly twice Shields’ age. The Ashburn, Virginia, native also has won five of her past six fights against opponents that entered those bouts with losing records.

Assuming the heavily favored Shields wins, this victory should move her one step closer toward the fight she really wants. Germany’s Christina Hammer, the WBC/WBO middleweight champion, was supposed to fight on the Shields-Nelson undercard, but was scratched, reportedly due to difficulty securing a work visa.

If that issue is rectified, Shields expects to move down to 160 pounds to challenge Hammer (22-0, 10 KOs, 1 NC) two fights after Friday night, perhaps as early as June or July. They talked trash face-to-face in the ring following Shields’ stoppage of Adler. 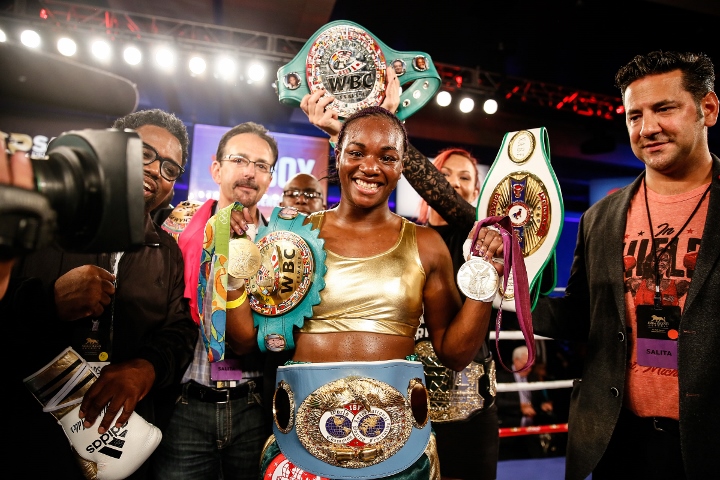 “I believe that it still can happen, as long as she takes care of everything on her end,” Shields said. “I was looking at June or July for me and her to fight, but maybe a little bit after that now because she’s having her problems. So we’ll see. But I’m definitely interested in the fight and I’ve been wanting to fight her. But it’s all about her being a champion and her being ready to take the fight.”

Shields can’t pinpoint why her fight against Hammer hasn’t happened yet.

“I don’t know,” Shields said. “I really can’t even think too hard about it. I know that I was fighting at 160 for my second professional fight and my goal was to fight at 160 and win the WBC belt at 160. But I guess she wasn’t ready yet or something like that. I don’t know, but that’s why we moved up to 168.

“I’m not gonna say that she was ducking me or anything, but I know that I did want the fight right away because I did want to be the WBC champion. Since we couldn’t get the fight with her, that’s why I moved up to 168.”

Moving back down to 160 won’t be difficult for the 5-feet-9 Shields.

She weighed in at 159½ pounds for her middleweight fight against Szilvia Szabados on March 4. She weighed only 164 pounds on fight night, when Shields stopped Szabados (16-11, 7 KOs) in the fourth round of her second pro bout at MGM Grand Detroit.

“I don’t really rehydrate that much and I’m not really that big,” said Shields, who won each of her gold medals at 165 pounds in 2012 and 2016. “I think TV adds 10 pounds because I’m actually pretty skinny. I just don’t think people actually get to see me, I guess.

Whichever weight she’s at, Shields intends to continue progressing at the rate she has improved since she made her pro debut on the Andre Ward-Sergey Kovalev undercard nearly 14 months ago in Las Vegas. Nelson is the second straight opponent who is at least four times as experienced as a professional, yet Shields knows she is more than ready for these types of foes.

Shields showed poise beyond her experience while dismantling Adler.

“I think my last fight showed how poised and how calm I can be. Now it’s just about aiming the shots and getting them to land where you want them to get the knockouts. I think I’ve progressed there and I’ve just calmed down and been able to see more.”

As much as the Flint, Michigan, native values knockouts and the entertainment those types of victories provide, she won’t lose focus chasing knockouts. Shields wants to be the face of women’s boxing and understands consistently displaying skills is important in her quest for respect.

“I think my career will be a mixture of both. I’m gonna get some knockouts and then I’m gonna have some times when I’m boxing. Maybe not the full rounds, but maybe six or seven rounds before the knockout comes, breaking the other fighter down. I think that’s good for boxing, too. But a knockout is great. Who don’t like knockouts?”

This is nothing but a three ring circus look at the rankings for anything from welterweight up there's no quality if these were guys they wouldn't be ranked in the top 25... and other than Headliners like this Shields they…

hammer's been KO'd already but it was change to a NC

Shields vs. Hammer is what I want to see, but I'll watch Shields vs. grandma for entertainment first.

[QUOTE=Wing Pingping;18401095]Not joking, but do female fighters realise they can easily make ten times the money in ****?[/QUOTE] You really would want to see her in a P orn film??? Your SIC!!!