Cobia Breedy: This Is Bigger Than Me, Doing This For My People Back Home In Barbados

It took nine months for Cobia ‘Soldier’ Breedy to receive an offer for a fight in 2020, and all of a couple of days to accept the opportunity.

The unbeaten featherweight did so even as the deck is stacked against him, stepping well up in class for a short-notice clash with perennial Top 10 contender Tugstsogt Nyambayar (11-1, 9KOs). Their bout takes place this Saturday as part of a Showtime-televised tripleheader from the Mohegan Sun Casino in Uncasville, Connecticut.

Breedy entered the picture on less than three weeks’ notice, replacing Mexico’s Eduardo Ramirez who was forced to withdraw after testing positive for COVID-19.  With the upgrade comes putting his unbeaten record on the line against Nyambayar, a 2012 Olympic Gold medalist for his native Mongolia whose lone loss came in a 12-round decision to reigning World Boxing Council (WBC) featherweight titlist Gary Russell Jr. this past February in Allentown, Pennsylvania.

“He’s a good fighter. He’s a silver medalist. He’s fought good fighters but he’s never fought the Solider yet,” Breedy (15-0, 5KOs) insisted during a recent media conference call. “It will be history, it will be great for my people and the government.” 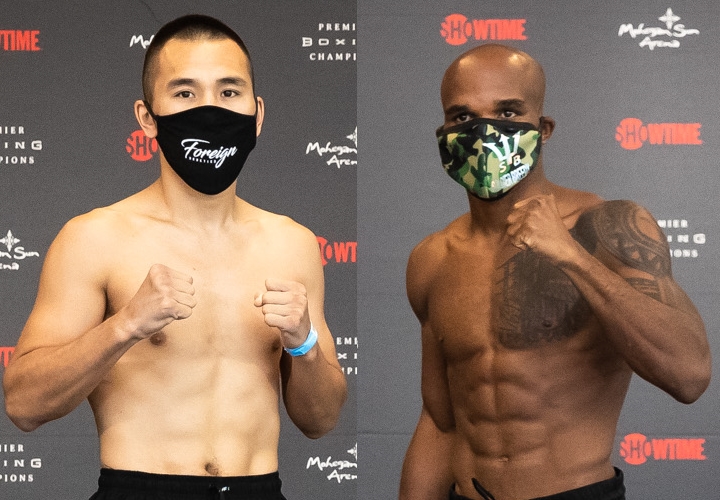 Breedy has trained out of Barry Hunter’s HeadBangers Gym in Washington D.C. for the past couple of years, having relocated to the area from Bridgetown, Barbados prior to turning pro in 2014. The entirety of his career has taken place in obscurity, his biggest moments coming on the non-televised undercards of Premier Boxing Champions (PBC)-branded events.

The unbeaten featherweight was featured in supporting capacity to a March 2019 show in nearby Oxon Hill, Maryland featuring stablemates Lamont and Anthony Peterson, in fact the final fight of Lamont’s career as he was stopped by Sergey Lipinets in the 10th round of a welterweight thriller. His most recent bout came last December, scoring a 6th round stoppage of Titus Williams on the non-televised undercard of a Showtime event topped by Jermall Charlo’s 7th round knockout of Dennis Hogan to defend a middleweight title.

Saturday night marks by far his toughest test to date, while just another night at the office for his opponent. Nyambayar is coming off of a loss, though still the far more credentialed of the two and entering as a massive betting favorite.

All that means for Breedy is that he has nothing to lose, other than his unblemished record. What he has to gain is a title shot of his own, with the winner to become the mandatory challenger to Russell’s WBC title.

“It will be history, it will be great for my people and the government. Boxing in Barbados is not a big thing. We are considered a third world country. Me bringing hope back to my country is an awesome thing. I left Barbados to pursue my dream. I left to become a world champion. I can show the kids there that you can from Barbados and follow your dreams.”

Nothing but respect to a fellow military veteran. I respect any man who serves his country

Do your thing, Bajan man. We rocking with you. I heard y'all getting rid of the dusty Queen next year.

Great opportunity for you to perform & show the boxing fans what this young fighter from the Islands can do Make the best of it Cobia Breedy Here's wishing You much success in tonight's fight Do Barbados proud my friend!