Claudio Marrero (22-1) became a champion this past Saturday night when he blasted out the previously unbeaten Carlos Zambrano (26-1) at Sam's Town Hotel & Gambling Hall in Las Vegas in the first round of their WBA (interim)/IBO featherweight title fight.  The bout headlined a FS1/Fox Deportes main event.

Prior to the fight, Zambrano told BoxingScene.com that Marrero wasn't as fast as he thought he was and that he would prove that he is faster than the Dominican once they step in the ring.  The exact opposite occurred as it appeared that Zambrano never saw the punch that knocked him out in the open minute of the fight.

"I was extremely determined and very well prepared. The fight had been cancelled three to four times before and it was destiny. I wasn't going to be robbed of the title. It is easy to say something but once you get in the ring it is very different. Once you step inside you see how difficult it is," Marrero said in reference to Zambrano's comments. 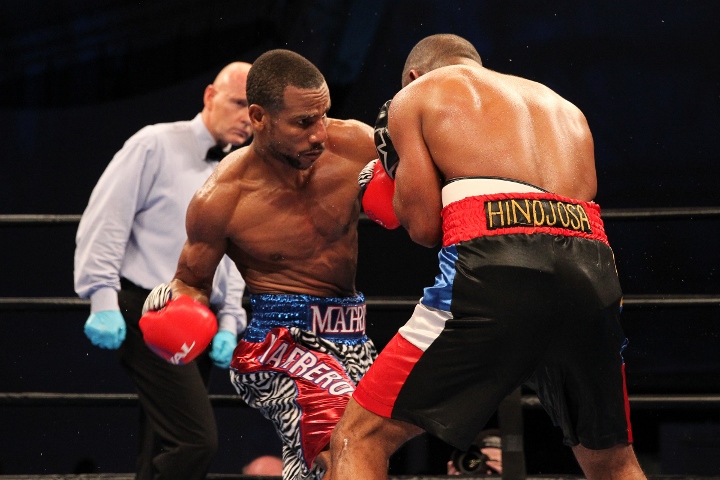 The WBA recently ordered a fight between the two other champions in the featherweight division, Leo Santa Cruz and Abner Mares as they continue their efforts to consolidate the total amount of champions within the organization. The winner of that fight will then likely be ordered to face Marrero in the near future and that is exactly the fight that Marrero wants next.  He is very confident that he will be able to defeat either of the multi-division champions.

With all three fighters being advised by power broker Al Haymon, it shouldn't be too hard for them to come to an agreement.

"I will talk to my team and I want to fight the best. As soon as Mares steps in the ring with Santa Cruz then I will be the mandatory. That is a tough fight. They are both proven champions. But either one of them will leave the ring busted up after facing me. If Santa Cruz thought Frampton was fast, wait till he sees my speed," Marrero told BoxingScene.com.