The effort to get boxing back in primetime on CBS has proven to be a struggle. The upcoming welterweight clash between Keith Thurman and Shawn Porter was originally due to take place on March 12, but was pushed back to June 25 after Thurman sustained serious injuries from a car wreck in late February.

Plans are still on for the welterweights to top the first boxing show to air live in primetime on CBS since 1978, but the show takes a hit in losing a strong lead-in bout. Reigning featherweight titlist Jesus Cuellar was due to face former three-division champ Abner Mares, who was forced to withdraw due to undisclosed medical reasons.

The brass at Showtime/CBS and DiBella Entertainment will announce in the near future alternate plans for the June 25 chief support. 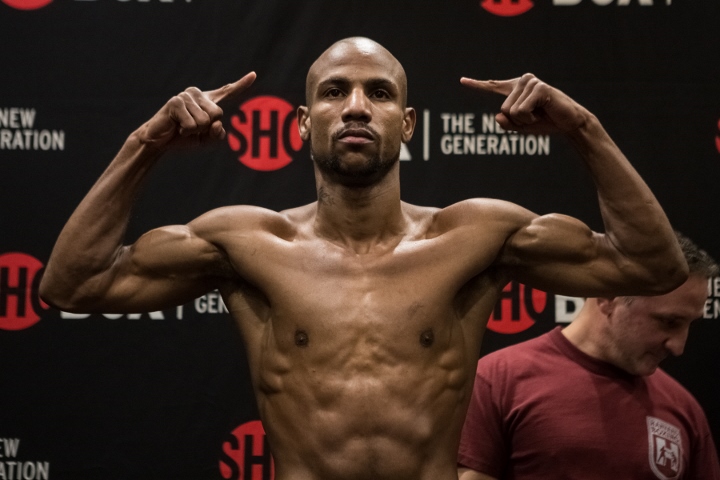 Whether or not Cuellar (28-1, 21KOs) remains on the card depends on the level of opposition to be found on short notice. One such fighter who’s been willing to get in the ring with the Argentine boxer is former foe Claudio ‘The Matrix’ Marrero. The resurgent contender from Miami by way of Dominican Republic has scored six straight wins following the lone loss of his career at the hands of Cuellar in their Aug. ’13 vacant featherweight title fight.

The southpaw boxer has been pushing for a rematch and was more than anxious to have stood opposite corner on June 25. Politics and demographic preference dictated that Mares needed to be a part of the telecast, as he was due to face Fernando Montiel on the original March 12 date. Now it’s possible that not only will Cuellar likely have to sit out, but still move forward with a Marrero rematch down the road.

“This was a fight I always wanted and our team told the powers that be we were ready to go on June 25,” Marrero (20-1, 14KOs) told BoxingScene.com through translator and head trainer Herman Caicedo. “Believe me, every time I see Cuellar’s name for a fight, it motivates me for my own path back. If Cuellar acknowledged and pushed for it like a true champ, he'd still be fighting on June 25. He wouldn't be leaving as champion, but at least he wouldn't have wasted a training camp.”

The loss is the lone regret Marrero still carries, although grateful that it came as early as it did in his career. At the time, he was just 23 years old and a mere 14-0 when running into the more experienced Cuellar, who claimed 12-round unanimous decision in their ESPN2-televised affair.

Six wins later, Marrero is on the verge of securing a rematch. He is deep in training for a planned July 8 showdown with Carlos Zambrano, with the winner to become the mandatory challenger for Cuellar.

“I want to show the boxing world that Cuellar didn’t win that night, that I gave it away. I’m going to do everything possible to get back into that position,” Marrero insists. “I believe after this fight against Carlos Zambrano that the powers that be will push hard to get to a title fight.

“I will be Cuellar’s mandatory. It will be harder for him to run from a rematch.”

That's not a bad late replacement if it happens