Claressa Shields To Habazin: I'm A Lot Stronger Than Braekhus

It wasn’t just the one-sided way Cecilia Braekhus beat Habazin that made Shields want to stop watching it. It was how Habazin, Shields’ opponent Saturday night, made matters too easy on the undisputed women’s welterweight champion in their 10-round title fight five years ago.

“I think just the whole fight with her and Cecilia Braekhus was pretty hard to watch, just to be honest,” Shields said during a recent conference call. “There was a whole bunch of bouncing around. They both were off balance when they threw their shots.”

The Colombian-born, Norway-based Braekhus won all 10 rounds versus Habazin on each of the three scorecards in September 2014. While watching footage from that fight, Shields noticed plenty of things she can exploit during their 10-round fight for the vacant WBC and WBO 154-pound titles at Dort Federal Credit Union Event Center in Flint, Michigan, Shields’ hometown.

“Ivana likes to put her head down and just throw punches,” Shields said. “You know what I mean? Whenever she feels like she’s in danger, she just goes into a straight brawl mode, and put her head down and start swinging. And Cecilia had a really good jab against her that fight, and really just overpowered her, to be honest.

“And I kind of feel like towards the end of the round, Ivana kind of started fading and doing a whole lot of holding, and ducking and swinging, and stuff like that. But early on, you know, she tried to stand her ground and used her combinations, but it’s nothing that I haven't seen before. And I know for a fact I’m a lot stronger than Cecilia Braekhus, so Ivana is gonna have a lot of problems on her hands come October 5th.”

The 24-year-old Shields (9-0, 2 KOs), a two-time Olympic gold medalist, will try to capture a title in a third weight class in just her 10th professional fight when she encounters Croatia’s Habazin (20-3, 7 KOs). That would eclipse the accomplishment of WBA/WBC/WBO lightweight champ Vasiliy Lomachenko (13-1, 10 KOs), a Ukrainian southpaw who won a championship in a third division in his 12th pro bout. 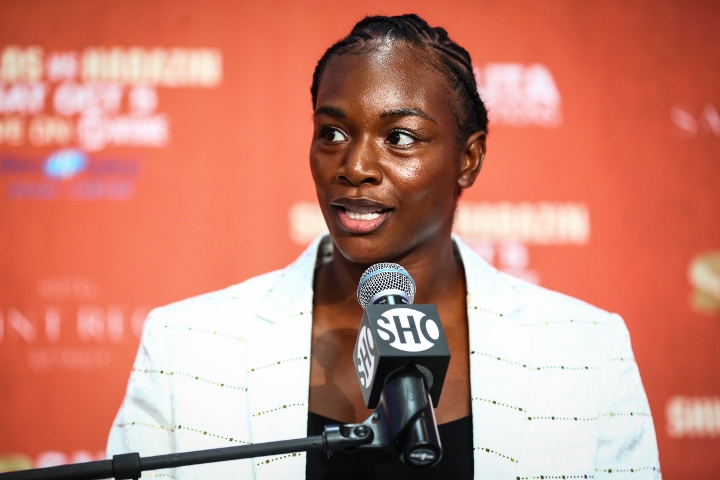 [QUOTE=lowblows420;20100933]Btch your not stronger than Breakhus seriously fkng quit that wannabe Floyd mayweather trash talk bullsht just like Floyd I'll never give you a fkng dollar of my $[/QUOTE] Daaamn homey you need a maxi pad or something 🤔 she…

[QUOTE=lowblows420;20100933]Btch your not stronger than Breakhus seriously fkng quit that wannabe Floyd mayweather trash talk bullsht just like Floyd I'll never give you a fkng dollar of my $[/QUOTE] She don't need your money and Floyd didn't either. All fighters…