Think Vasyl Lomachenko is the premier authority on a quick transition from amateur ring success to professional stardom?

Then Claressa Shields has a simple message for you:

The confident Michigander mirrored the Ukrainian's dual Olympic golds with wins at the 2012 and 2016 Games -- and has climbed the punch-for-pay ladder at an even more prolific rate than Loma since a celebrated Las Vegas debut just 437 days ago.

She added a second win and a regional title belt in less than four months and had already captured a pair of world super middleweight titles well before her precocious career arrived at the one-year mark.

Along the way, too, a main event appearance on Showtime and near consensus acclaim as the biggest thing in women's boxing.

Less than seven weeks shy of turning 23, Shields does concede to being surprised by the suddenness of it all.

Even though it was pretty much expected from the start.

"It's always been a good time to be me," she said. "I already knew that my career was gonna take off once I turned pro. But it did go a lot faster than what I thought.

"I saw myself fighting a main event on Showtime within a year, and I did that within being pro three or four months. And also me winning a world title, I thought that would be within a year also, but it came in my fourth professional fight.

"It all just kinda happened really fast. Fighting a main event on Showtime was good enough for me, with it being so early. But then, knowing I'm gonna fight a world champion who's 16-0 with nine knockouts -- and she's gonna come to America to defend her title against me -- it was like, 'Whoa! Yeah, right.' Everything was a surprise to me. I had no idea." 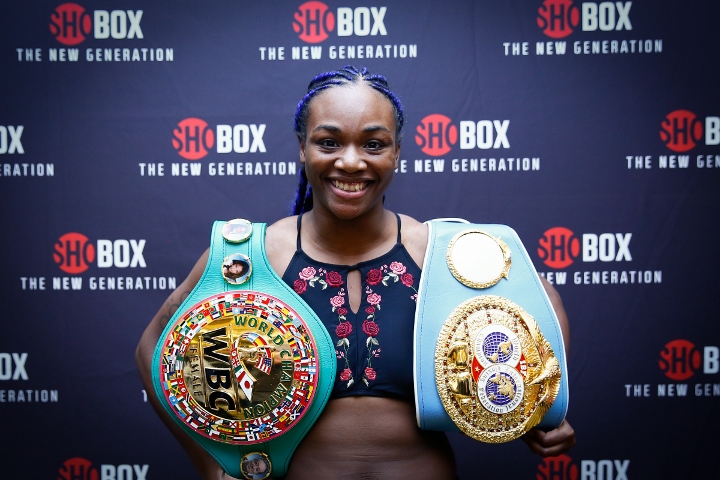 Now 5-0 with a pair of KOs and a title defense, Shields embraces her role as the latest savior of a sport that's veered between gimmick, sideshow and steppingstone since Christy Martin was a staple on Don King undercards in the mid-1990s.

It was "near dead" prior to her arrival, she said, but it'll thrive going forward thanks to the depth of actual fighting talent -- and absence of stand-ins concerned only with using it to further other career ambitions.

"I felt like there were some good women before me, but I don't think they had the resume and they didn't have as much skill," Shields said. "There's a different set of skills in professional boxing than there was a few years ago. Even the women that Laila Ali fought against weren't as powerful or as strong as the women we have out there today.

"That's what raises the bar."

As for those insisting men are the only elites and women are forever on the second-tier, the 5-foot-8 Shields would even consider -- under the right matchmaking circumstances -- proving her superiority in a head-to-head competition.

Give her an agreed-upon weight advantage, and the requisite paycheck, in fact, and it's a done deal. Not something she's seeking out, but not a challenge she'd run from if it made sense.

"I don't feel like I need to fight a man in order for my career to be at the top," she said. "If you look at the footage and you put all the 'Women need to be in the kitchen and raising babies' things out of your mind, then you will actually see that boxing is for women -- women boxing against other women fighters."

"I spar guys all the time. I already know that I can beat a guy up. I'm not in it to prove that. But if a guy ever wanted to fight me or have me get in a ring with a man, if he's 147 I'll get in the ring and kick his ass. If the guy ain't got skills I'm definitely going to get in there and kick his ass if the money is right."

[QUOTE=rudy;18447384]She is no superstar the term is simple she cannot punch, so will never gain fans, i dont want to watch a 12 round fight of harldy any action. Katie taylor is no different none of the can actually punch…

Most of us have NO interest to see women doing boxing. Your agenda, we don't want it. That's pervert, ugly and very sad to see.

[QUOTE=NickyB;18447097]If there's a woman who can do it, it's Claressa shields. She has amazing talent and so much fun this is a woman who is always smiling. She has an amazing personality. I think it could help if she brought…