Most ShoBox events are designed to induce the birth of a boxing star. Tonight, it was headlined by Claressa Shields, who reminded everyone that she already is one.

The first card ever headlined by a female bout on premium cable ended in scintillating fashion, as Shields savagely beat down a double tough Szilvia Szabados, stopping her in the fourth round.

"I knew she was tough coming in. It was about respect. I wanted to go out there and show her I had power and wasn't scared of her," said Shields. 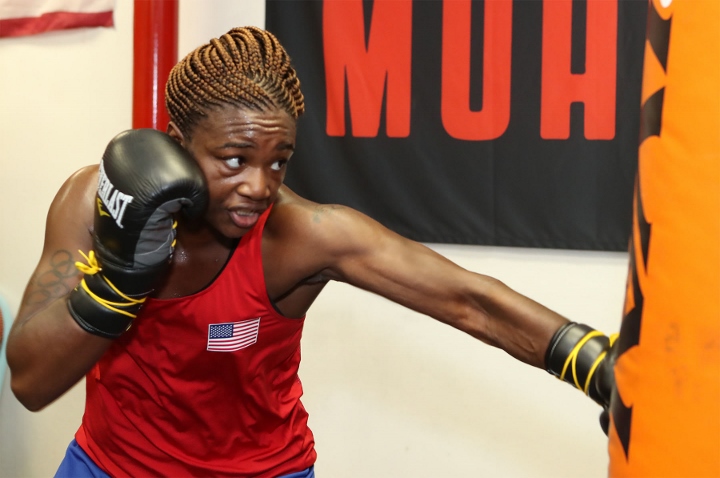 The victory netted Shields the vacant NABF middleweight title, a significant achievement for a fighter in just her second professional bout.

Shields was able to land power shots at will, snapping Szabados' head back with left hooks and straight rights. Finally at 1:30 of the fourth round, referee Harvey Dock saw one final jolting hook and took matters into his own hands, saving the brave Szabados from herself.

"I was going to get the clean shot in one round and she was going to go, but the ref stopped it in the fourth. But a knockout is a knockout," said Shields, who according to her management, has her eyes set on a matchup with middleweight champion Christina Hammer by the middle of next year.

The sold out crowd at the MGM Grand Casino in Detroit was raucous from the moment Shields entered the arena, singing along with her entrance music and chanting throughout the fight. There was no mistaking who the people had paid to see.

Prior to the main event, Nikolai Potapov defeated Antonio Nieves via split decision  to capture  the WBO NABO bantamweight title. Scores were 96-94 twice for Potapov, and 96-94 Nieves.

It was a nip and tuck affair, with very few telling blows landed. Nieves (17-1-2, 9 KOs) appeared to be the more adaptable of the two, but Potapov's unflinching commitment to his technical style makes him difficult to figure out.

With the victory, Potapov (17-0-1, 8 KOs) can set his sights on WBO champion Marlon Tapales, but has also been linked to a possible fight with newly crowned WBA titleholder Zhanat Zhakiyanov.

In the ShoBox opener, Joshua Greer knocked out James Gordon Smith in one of the best televised fights of the year so far.

Greer rocked Smith with several right hands in the second round, but endured some heavy body work in exchange.

In the fifth round, Greer found the shot he'd been landing all night long—a looping right hand—but this time with the desired effect, dropping Smith hard. Though he tried desparately to finish the fight, he couldn't find the same punch again, and by the end of the round, it was Smith driving the action.

Less than two minutes later however, he would, knocking Smith cold with the same right hand. Immediately afterward, he mounted the ropes and celebrated with a pillow he had written “Nite Nite” on, in regards to his fallen opponent.

“The pillow is just my trademark. It’s nothing personal. You have to stand out somehow. That’s just what I do. Nothing personal to him," said Greer. “I told everyone when I got here I didn’t have that pillow for no reason. I said don’t blink and I wasn’t playing. I knew I was going to get him."

The energy in the MGM Grand in Detroit was quickly sucked out by an abysmal affair between welterweights Wesley Tucker and Ed Williams. It should be noted that the hideous nature of the fight had nothing to do with Tucker, who marched forward and freely invited exchanges, but with Williams who showed no interest in engaging offensively apart from holding and punches behind the head.

The hometown crowd quickly turned on Williams due to his antics, and instead supported the visitor, Tucker, who resides in Toledo, Ohio.

"I was really frustrated in there, but I’m an action kind of fighter, so when he was running it kind of was pissing me off. He was all over the place. He ran the whole fight. I would love to get back on Showtime and show what I can really do," said Tucker.

No one in America gives a hoot or a flying fluck about ghetto Shields the man/woman with tattoos and there is no womans boxing anyway. It was a waste of time by Showtime even putting ghetto girl shields on TV…

[QUOTE=considerthis;17492408]Literally looked like they picked someone from the stands. Part of the reason nobody guves a f*ck about women's boxing is cuz the talent pool is too shallow. Seriously...if it's a headliner on shobox, it should at least look like…

[QUOTE=!WAR MIKEY!;17493654]half dollars refer to the areola of the titties lol at imagining people tipping quaters and half dollars at the strip club lmfao.[/QUOTE] Ya that's why I didn't get your reference. Never seen titties areolas That size.

[QUOTE=allupnem;17492400]This fight is bad LOL. There's a freason women boxing isn't on TV very much. They aren't any good.[/QUOTE] [QUOTE=crisantonio917;17492649]Clarissa fought a girl that couldn't spell FIGHT and didn't even score a knockdown, straight garbage, no wonder womens boxing died…

The "night-night" guy in the opener :lol1:? He's a personality, but like Keith Thurman, he's going to learn that KO gimmicks have a short shelf life in this sport. As you upgrade in competition and face stronger chins, your punches…