The Jr. middleweight title victories of Tony Harrison and Julian Williams are two of them, both of them former title challengers too many gave up on after stoppage losses. Andy Ruiz went from short notice card saver to tri-belted heavyweight titan.

None of those might have been as unlikely as what occurred on February 9.

Then-WBA 130 lb. titlist Alberto Machado had built up something of a sympathy/empathy campaign amongst some hardcore fight fans. He was the man who beat the man (for the WBA strap anyways) only to be demoted to their secondary champion’s spot in favor of an out of nowhere super champion designation for Gervonta Davis.

Machado earned his place as the rightful top champion for the profligate WBA in the ring. He lost it in an office. That sucked.

Then he lost their consolation belt in the ring too.

30-year old Andrew Cancio (20-4-2, 15 KO) didn’t seem to care one way or the other about the road the belt traveled. It was on his waist after a career saving performance. Cancio rose from the floor in the first to drop Machado four times in the fourth and ultimately final round.

It was a hell of a resurrection.

After an early career advancing win over Rocky Juarez in 2012, Cancio lost 3 of his next six fights, stopped in 2016 by Joseph Diaz. A year and a half out of the ring appears to have done him some good. Cancio has won three in a row since returning in 2018 and now makes his first title defense in a rematch against Machado on Friday (DAZN, 7:30 PM EST).

Can Cancio keep his momentum?

It’s one of the fun elements of boxing’s Cinderella stories. Most are lucky to last long. Often, they struggle to get past the title win. 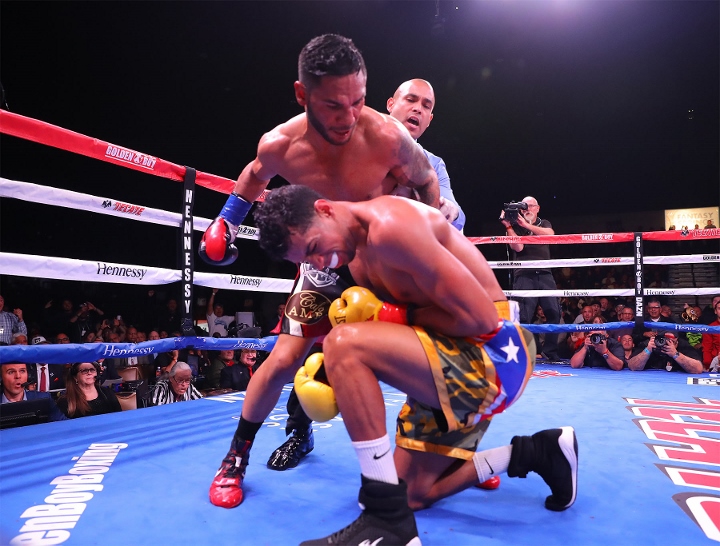 James Braddock, Buster Douglas, and Hasim Rahman all got to the ball only to find a pumpkin in their first heavyweight title defense. Iran Barkley was an unlikely three-division champion who found the perfect foil at middleweight and light heavyweight in the otherwise more talented Thomas Hearns.

Cancio was perhaps an even more unlikely title winner than any of them. In most cases, retrospect tells us even the more famous Cinderella’s were pretty well regarded contenders at the time they made their lasting mark. Go look at an old issue of KO or Ring and Douglas is right there for most of the second half of the 80s in the top ten at heavyweight. Rahman moved in and out of the ratings before and after Lewis.

Even guys like Harrison and Williams this year were still considered part of the serious pack at Jr. middleweight.

Cancio was a step-up opponent for Diaz the last time he’d seen notable national airwaves. No one comes out of nowhere but he may have been the next best thing. Now he’s the new big story at Jr. lightweight, the new ‘rightful WBA champ’ and the man hoping not to hear “and new” at the end of the night come Friday.

It’s hard to say what the ceiling would be for Cancio with a win Friday. We just know for now it would raise it high enough that a second title defense, one more solid payday, and another trip to the ball would be possible.

They can’t all be eight or nine figure megastars, but for a fighter to go from the verge of forgotten to part of the title picture can be the story. If Cancio makes it merely a first chapter, that’s all the more to feel good about.

EndGame will return to theatres with a deleted scene and some other goodies? Disney is all in to try and beat Avatar for that global record…Kazuto Ioka bounced back from a loss to Donnie Nietes to win a title at 115, but can he make a move on the top spot? We missed a chance to see Ioka against Roman Gonzalez or Juan Francisco Estrada lower on the scale. It’s not too late for either scrap, or a rematch with Nietes if the money were right…Guillermo Rigondeaux might be fighting a week from now in a sanctioning body eliminator but remember: he’s still never lost at 122 lbs. The Cult of Rigo has died down but they can still rest knowing the rightful world champion at Jr. featherweight is the maestro from Cuba…Chris Arreola-Adam Kownacki will be good TV…Tyson Fury was good TV last weekend. As tweeted after the fight, If you think Fury deserved the Wilder decision, coupled with what he did to Wladimir Klitschko, there’s really no argument. He’s the man until someone beats him. That said, if he’s the man, and the billion-dollar corporate backers want to sell his historical claim to the honor, the man shouldn’t get anymore passes on guys who aren’t genuine top ten heavies. Since the Klitschko win, Fury has had two dust busters, Wilder, and now another tune-up. Time to get, and keep, the consistency of opposition up.

The first fight wasn't no lucky shot, it was an @ss whooping

i think machado will do better, but cancio has his number

The betting on this fight is pretty crazy Andrew Cancio opened up a +300 underdog for his rematch with Alberto Machado - Friday, Indio, California, DAZN. Overnight, UK gamblers pounded the penny limits & line has completely…

I guess we'll have to see if Little Mermaid Alberto Machado shows up to fight.