Christopher Diaz started separating himself from Jason Sanchez by the third round Tuesday night and never relinquished control of their 10-round featherweight fight in Las Vegas.

ESPN televised Diaz’s victory as part of a four-bout broadcast. 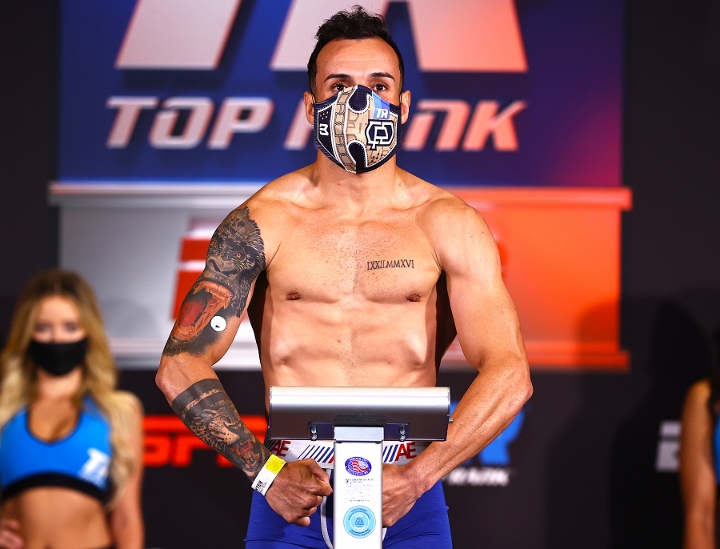 The 25-year-old Diaz (26-2, 16 KOs) produced his best win since Shakur Stevenson out-boxed him and defeated Diaz by 10-round unanimous decision in April 2019 at Madison Square Garden in New York.

The 25-year-old Sanchez (15-2, 8 KOs), of Albuquerque, New Mexico, lost for the second time in his past three fights. Mexico’s Oscar Valdez (27-0, 21 KOs) dealt Sanchez his first professional defeat in June 2019, when Valdez dropped Sanchez in the fifth round and out-pointed him by big margins to retain his WBO featherweight title in Reno, Nevada.

Clearly way ahead on points, Diaz continued controlling the action throughout the 10th round. His left hook knocked Sanchez off balance just after the midway mark of the final round.

A hard right by Diaz shook Sanchez with 1:20 to go in the ninth round. Diaz’s counter left hook rocked Sanchez toward the end of the ninth.

Diaz drilled Sanchez with a right hand that snapped his head back 25 seconds into the eighth round. Sanchez clipped Diaz with a hard right hand of his own in the final minute of that eighth round.

Sanchez and Diaz traded right hands with about 50 seconds to go in the seventh round. Sanchez nailed Diaz with a left hook several seconds thereafter.

Diaz continually made Sanchez miss with rights and lefts throughout the sixth round. He drilled Sanchez with an overhand right as Sanchez opened up toward the end of the sixth round.

Diaz’s right hand made Sanchez backpedal and reset his feet with just over two minutes left in the fifth round. A counter left hook by Diaz rocked Sanchez with about 30 seconds to go in the fifth.

Referee Vic Drakulich warned Sanchez for hitting Diaz behind his head early in the fourth round. A short, left hook by Diaz knocked Sanchez off balance with 1:40 to go in the fourth.

A counter, straight right by Diaz backed up Sanchez with just over 30 seconds to go in the fourth round.

An overhand right by Diaz connected just after the halfway point of the third round. Diaz also snuck in a left to Sanchez’s body with just under a minute remaining in the third.

Neither fighter landed much in the opening round until Diaz drilled Sanchez with a straight right just before it ended.

[QUOTE=ELPacman;20626270]Pitufo needs to go down in weight. He's lacking power right now and looks like the smaller guy.[/QUOTE] Down to 122 would be crazy considering he was fighting for a title at 130 not long ago.

Pitufo needs to go down in weight. He's lacking power right now and looks like the smaller guy.

I am glad that Christoper Diaz win and at the same time improve, evidence of this fight. :boxing:

Good fight. I thought it may be a little more competitive on paper but Pitufo showed he was a level above Sanchez at this point.