For so many stuck in the bizarro world of the COVID-19 pandemic, beyond the obvious worries about staying healthy, paying bills and having enough food, ambitions have been running along the lines of what television series to binge watch, what video games to play or what books to read.

On a treadmill. With a month’s training. After never running a marathon previously.

“I like these challenges,” said the South Africa native. “It's a big mental challenge and it's such a reward when you beat the mind. This is one of those challenges where I'll mentally be rewarded.”

As a two-time marathoner myself, I reminded him that he’ll also be rewarded by not being able to walk the day after. He laughed, probably wondering how it just happened to be me who got him on the phone about this, but when I saw his tweet about his desire to run a marathon at home in California, while streaming it live on Instagram, no less, how could I not respect the attempt and the sheer guts being shown by “The Heat?”

“I always wanted to run a marathon, but there was always something going on and I never had the time to do it,” he said. “Now, I have the time to do it. What's my excuse? I don't have any. I'm giving myself one month because I know if I'm giving myself a month, I'm gonna train. And I need something to make me feel like I'm working towards something while we're in this quarantine. Usually it's a training camp, getting ready for a fight, but all of a sudden, it's not there. So, I said I'm gonna run a marathon on my treadmill because I'm supporting this ‘stay home’ cause so we can get through this. And I want to show people that even though we're staying home, we can still accomplish a lot of things. So, I'm gonna run a marathon. I'm just gonna do it.”

Originally scheduled to face Antonio DeMarco this Friday night in Tulsa before the pandemic shut the sports world down, van Heerden has been riding high as of late, winning five in a row since a 2015 loss to Errol Spence Jr. But before he was able to chase his sixth straight victory, everything changed, and like everyone else, he saw how people were reacting.

“Now that I'm talking to you, I'm realizing what a crazy idea this is.”

Okay, it is crazy, because anyone who runs 26.2 miles for nothing more than a medal, t-shirt and some free bagels and bananas has got something loose upstairs. But all joking aside, there is a glory in completing something in which the first participant died. 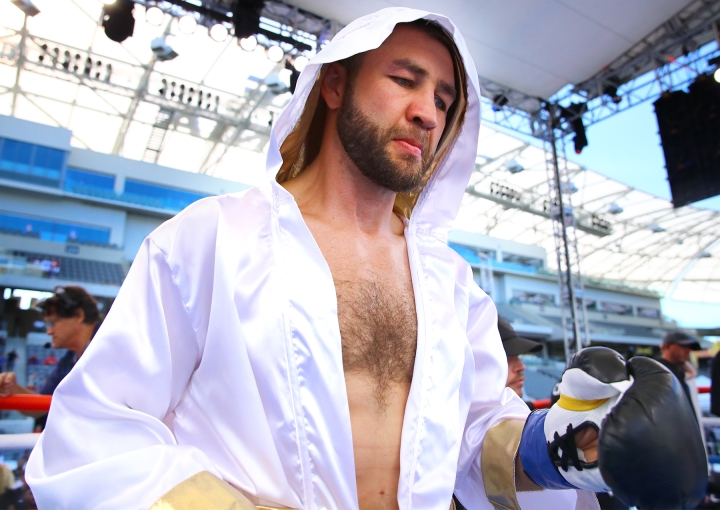 And Pheidippides didn’t even go 26.2 miles as he ran from a battlefield near the town of Marathon to Athens to let everyone there know that the Persians had been defeated. Legend has it that he hit the deck around mile 25.

But van Heerden need not worry. He’s at home with his girlfriend, he’s in a controlled environment, and he’s an athlete. There’s something to be said for that last part, and while he’s never gone the full marathon distance, he has put in a half-marathon before. And back then, he was also winging it.

“I can run ten miles with no problem,” he said. “I'm a runner. And when I ran the half-marathon, I just woke up one morning and was like, 'Oh, I'm gonna run a half-marathon.' I didn't prepare for it, I just wanted to do it. I did ten miles at a fairly quick pace, 7:45 to 7:50 a mile, so I was pushing. And I got to ten miles fairly easy and for some reason, mentally, I was like, 'Three more miles left, let's take my foot off the pedal and go slow.' And the moment I did that, the last three miles were a nightmare.

“I remember how hard it was to finish the last three miles in a half-marathon,” he muses, knowing that he’ll have to do that 13.1 miles twice in less than a month. It’s not easy, especially when you hear the nightmarish stories of runners hitting the proverbial wall around mile 20. Personally, I never hit the wall in my two New York City Marathons, and coaches have told me that proper hydration and nutrition on the course will prevent such an occurrence. Van Heerden knows this and will be prepared on May 10 to stay hydrated and nourished on the treadmill.

As for the treadmill, nothing can help ease that pain. For most marathons, especially the major ones, the course is filled with cheering spectators, kids giving runners high fives, music and an energy that can carry tired legs that extra mile – or ten. Add in the camaraderie of the runners you’re out there with, and what can be the hardest physical activity of your life can be made a lot less difficult.

In van Heerden’s case, it’s him and his treadmill.

“I did a ten miler yesterday on the treadmill just to see where I'm at, and while I was running it, I was like, 'Why am I doing this?'” he laughed. “It's so boring. I'm looking at the same thing for an hour. And to be on a treadmill four-plus hours, it's crazy.”

He’s not about to say, “April Fools” on this one, though. Van Heerden is a fighter, and just like so much of boxing is a mental game, the same goes for distance running, and he knows this. That gives him confidence.

“A lot of this is mental,” he said, referring not just to the marathon, but the current pandemic situation. “And if we're mentally strong, we will get through this. I hope people can find some sort of motivation out of this and we can push through this.”

The attempt alone is motivating, and van Heerden appreciates the support and encouragement he’s gotten since his tweet on April 11. He also knows that it’s starting to take on a life of its own.

Some would say that’s a good sign, because the fighter who doesn’t have those butterflies on fight night is too comfortable. Comfortable fighters lose, the ones with an edge win. Chris van Heerden has his edge, and in his eyes, there’s only one outcome to his first marathon.

“There's no way I'm not finishing it,” he said. “And once I get through this, there's a few champions I want to call out to see if they can do it.”