Earlier this week, Saunderss had his boxing licence suspended after he offered advice to men on how to hit their female partners during the coronavirus lockdown.

Saunders demonstrated boxing techniques on a punching bag in a video posted on social media and was seen explaining what to do if "your old woman is giving you mouth" and how to "hit her on the chin". 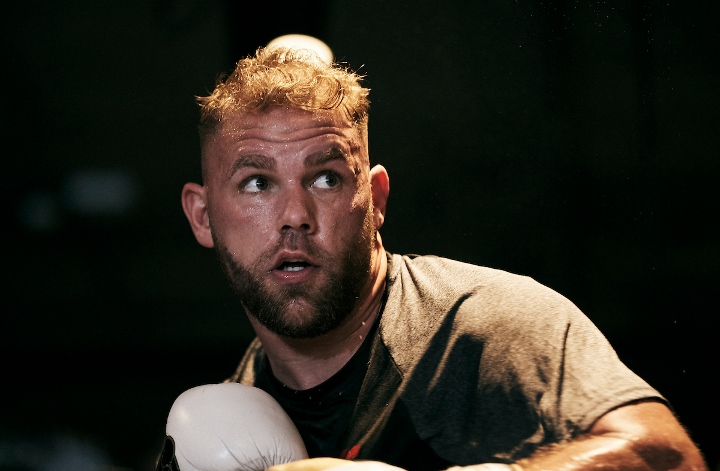 The British Boxing Board of Control (BBBofC) on Monday suspended the 30-year-old Brit, who will face a hearing.

A statement from  BBBofC general secretary Robert W. Smith said: "The British Boxing Board of Control having considered comments made by Billy Joe Saunders on social media have suspended his boxer's licence pending a hearing under the Board’s misconduct regulation, at a time and venue to be confirmed as soon as possible."

Saunders issued an apology on Twitter and insisted he does not condone domestic violence after receiving a backlash online.

Eubank, who suffered his first career defeat in a close points loss to Saunders in 2014, believes his former foe deserves a severe punishment for his last incident. Saunders is no stranger to controversial antics that have caused him to get in trouble.

"So Billy Joe Saunders, a women beating, COVID-19 hoaxing, drug abusing, police impersonating moron... oh yeah paid a vulnerable women to punch an innocent man in the face as well. How many more chances is this idiot going to get before his license is taken away for a good amount of time," Eubank Jr. said.

"As fighters at the top we have the kids looking up to us, copying what we do inside and outside of the ring. Having Billy Joe Saunders as a representative of boxing is an injustice to all women suffering in abusive relationships & to the kids who look to learn from us as ambassadors."

[QUOTE=Buggy bear;20491714]Walked straight into that billy.. nothing worse than be lectured by that guy ( of course he's right , we all know that ) but allowing yourself to be wide open to Eubank must really upset you ..lesson learned…

I never thought Eubank Jr. would be the voice of reason but there it is.

[QUOTE=Young Bidness;20492818]You need to educate yourself a bit more on PED use mate. First off, you're asking if Whyte passed VADA and failed UKAD. Different collection DATES, different findings. Why would anyone assume that both VADA and UKAD collect AT…

[QUOTE=HeadBodyBodyBody;20492799]UKAD/WADA and BBBofC said that for them, there was "no breach". There is just a difference between VADA's definition of "in-competition" and everyone elses, so for me, it seems like more of a technical f-up than anything else. But I…