Chris Colbert: Give Me Two Rounds, I'll Figure Out Any Opponent

As long as he’s remaining active, Chris Colbert doesn’t care who he faces in the ring.

It’s a good thing, since he has no clue of his next opponent for a fight just one month away.

“They got it down to a couple of guys, but I leave that up to my team,” Colbert (12-0, 4KOs) told BoxingScene.com of his next ring appearance, which will come in the co-feature slot of a Sept. 21 Premier Boxing Champions (PBC) on FS1 telecast in Lancaster, Calif. “I got the best manager in the game, Al Haymon looking out for me and working with my team (including mentor Pat Russo), so I don’t worry about that stuff. I never know or worry about who I'm gonna fight, just give me anyone who wants to push me in the ring.” 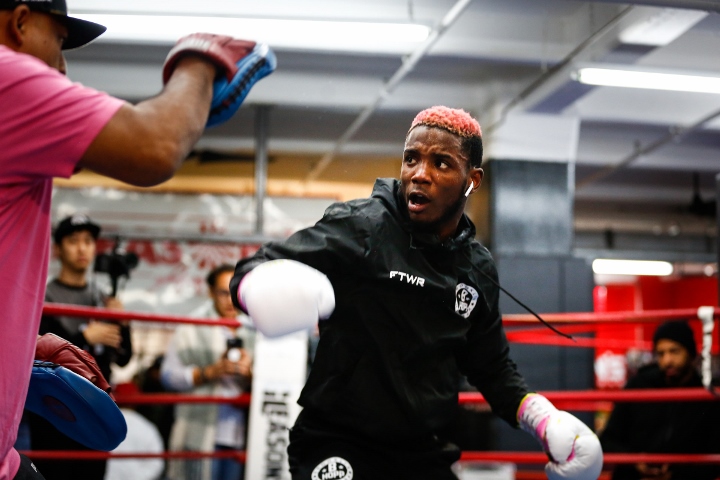 The 22-year old 130-pound southpaw from the Flatbush section of Brooklyn, New York has rapidly emerged as one of the hottest prospects in the sport. The Sept. 21 appearance will already mark his fourth fight of 2019 after fighting just twice the year before.

The lack of ring activity still came with its glory, however. Colbert broke through in a big way following a one-sided 7th round stoppage of Hendersonville (Tn.)-bred Austin Dulay in a pairing of unbeaten prospects last April. Already in 2019 has come a trio of impressive wins over serviceable opposition.

A common factor among wins over Josh Hernandez, Mario Briones and Alberto Mercado most recently this past June is the lack of time Colbert was afforded to study and prepare for their fighting styles.

Not that he was about to sit down and watch fight footage on them no matter how far in advance he knew who he was going to fight.

“I’m fighting 10 rounders, that gives me all the time I need to figure out my opponent,” points out Colbert. “Give me two rounds at the most, I'll figure out any opponent, any style.

“That’s what real fighters do, the ones who go on to run s*** in this sport. They get in the ring, figure out their opponent and they show the world just how good they really are, how you can adjust and adapt to any situation in the ring.”

Colbert’s fight will serve as the chief support to a super middleweight clash between former titlist Jose Uzcategui and veteran Denis Douglin. With a win, the plan for the Brooklyn-raised prospect is to fight one more time before the year is out before advancing to the next level in 2020 and beyond.

“One more fight this year after this next one, and I believe it will be a main event,” suggests Colbert. “I believe I deserve it and I’ll be more than happy to show on Sept. 21 that I deserve it. I’m the best prospect in the game and I got there by treating every fight like it’s the main attraction.

“I’m gonna fight the same in the ring, no matter what. That’s what the best do. It don’t matter if I’m the main event or the first fight of the night, I'm always gonna shine.”

[QUOTE=Mammoth;20002878]His power will improve with time[/QUOTE] Those Brits killed you man lol...I don't always agree with you but that's not right lol

[QUOTE=Dramacyde;20000214]Can't see him going far with that schoolgirl power that he has[/QUOTE] His power will improve with time

This kid is a top prospect imo and now that he has his mans strength you can see he has decent pop at least enough to get respect and with his skills and defense that's all he needs.