As previously reported on BoxingScene.com, Dereck Chisora launched a foul-mouthed outburst and eventually walked out of a press conference in London to announce his fight with Joseph Parker, seemingly furious that he is not top of the bill.

But Chisora – whom his manager and former opponent David Haye warned was “already in war mode” – decided to do his negotiating in a very public setting, demanding to go to the top of the bill or be paid more money, claiming “nobody gives a f*** about little guys no more” and slamming the World Boxing Super Series and the Muhammad Ali Trophy that they will be fighting for. 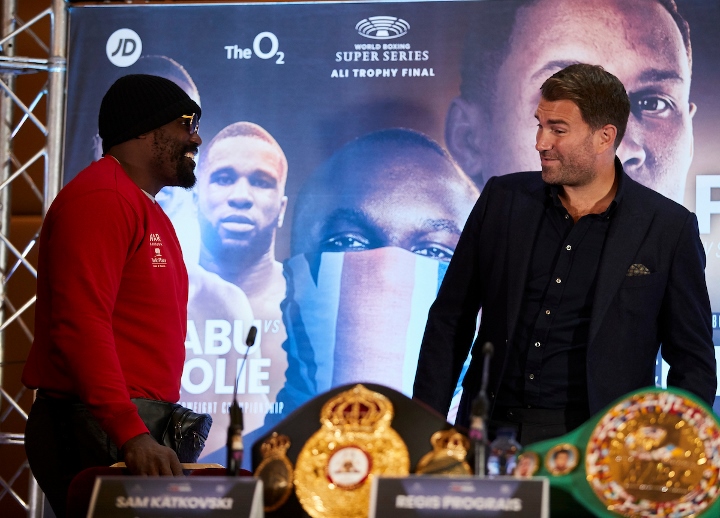 Chisora had remained quiet during the first part of the press conference but came out firing when Eddie Hearn, the promoter, introduced him.

Hearn pointed to Prograis and said: “The gentleman sitting next to you.”

“That doesn’t work for me,” Chisora replied. “I’m not going to sell out the O2 for them guys to be the main event. These guys want to sell Box Office for themselves, so f*** that. So give me main event or pull me out of the f***ing show.

“I’m being serious. You are trying to bombard me, you want me to sell it to my London crowd, London fans, and then you want to put these little guys, nobody knows about them, on my show and then try and mug me off. F*** that.

Prograis then tried to intervene, saying, “But we’re No 1 and No 2,” before Chisora completely dismissed him.

“Bruv nobody cares about you, let’s be honest,” Chisora said. “Don’t get me started by asking me questions. Am I taking the main stage, yes or no? If not, I want more money.”

He then turned his line of fire on Adam Smith, head of boxing at Sky Sports.

“Adam, who is taking the main event?” he said. “No one is answering me and I am going to go ballistic now.

“I’m sorry for doing this right now, but I feel like you are f***ing me with no Vaseline. We haven’t read about the Ali Trophy for the last six months and now they want to jump on our f***ing show on Sky because something else is going on. F*** that, give me more money and then we can get to business.”

He also interrupted Kalle Sauerland as he introduced Prograis and Taylor.

“Tell them to go box in f***ing Glasgow,” Chisora said. “They can sell out in Glasgow and we will see if people buy those tickets.”

He then got to his feet and walked out as Prograis was talking, although returned to the hall later to again make his point to Smith.

“With Dereck you never know what he is going to do,” Hearn told IFLTV, hinting that if there was public uproar that main events could be reversed. “But in terms of ‘Controversial Chisora’ that was only a five out of ten.”

“For me, we got our message over,” Sauerland said. “We are the best against the best and that is the end of it. It is up for Eddie to speak to his fighter and find out if there is a problem.

“I promoted Del for two years and he is a character. If he wasn’t a character he would not be co-feature in this show.”

Haha WAR Chisora! :fing02: He's a character and not afraid to tell the truth!

[QUOTE=Sparked_26;20048137]I get that. But Naz was world class. Same with McGuigan, Watt, Buchanan etc. [B][I]The point I was making is that Henry never was. He was a decent European operator like Del. [/I][/B] Generally we just like the bigger men.…

[QUOTE=JakeTheBoxer;20048261]So what if he has 9 losses? At least he fought somebody. He fought Vitali, Fury 2x, Pulev, Haye, Whyte 2x..Give one of todays prospects that route and I guarantee you...he will have many losses.[/QUOTE] Yeah he has fought some…

[QUOTE=apollocreed;20047761]I’m English and I agree with you. Casual fans want to see Chisora because they think he guarantees excitement. He’s had 9 losses ffs.[/QUOTE] So what if he has 9 losses? At least he fought somebody. He fought Vitali, Fury…