Dereck Chisora thinks Oleksandr Usyk is in for a rude awakening October 31.

Ukraine’s Usyk (17-0, 13 KOs) is an 8-1 favorite to defeat Chisora (32-9, 23 KOs) in their rescheduled 12-round heavyweight fight, but Chisora cautioned that Usyk hasn’t encountered an opponent quite like him. London’s Chisora predicted during an interview with Sky Sports that he’ll “go through” the undefeated southpaw.

“It’s not about how much I want it,” Chisora said. “You know, when you want something badly, what you will do for it. I’ll go through this man. Whatever he has got, he’ll need more to stop me. The way I will come for him will be unbelievable. I will go through him.

“I don’t think, in the heavyweight game, there is anybody stronger than me right now. Anthony Joshua, Tyson Fury, Dillian Whyte, Deontay Wilder? No, they aren’t stronger than me. I’m stronger, crazier and I want it more.” 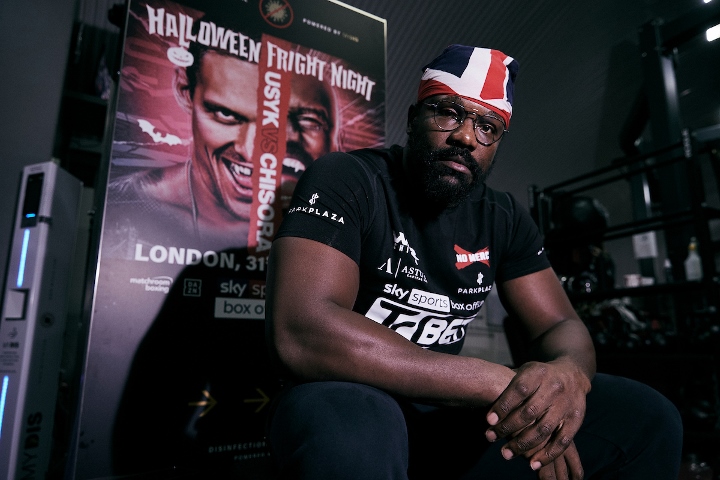 The 36-year-old Chisora cannot afford another loss if he is to get another title shot before his uneven career concludes. Upsetting Usyk would thrust him at least into realistic contention for a second heavyweight championship match.

“I don’t wanna let myself down,” said Chisora, who lost a unanimous decision to Vitali Klitschko in his only heavyweight title fight eight years ago. “Nothing else. I want to give my all. When it’s all said and done, I don’t wanna look back and say, ‘I should have done better in this fight.’ I want to let it all go, so when I hang up the gloves, I don’t have regrets. That’s the motivation I have. For me? It’s not about being in the top 10. It’s about giving the best fights to the fans.

“Every time you wake up, the rankings are different. It doesn’t faze me. How many people are interested to see me fight? The rankings don’t matter to me.”

Chisora is rated eighth by the WBO, 10th by the IBF and WBA and 12th by the WBC.

Usyk’s victory over Witherspoon was his first fight in the heavyweight division after giving up the IBF, WBA, WBC and WBO cruiserweight titles last year.

Chisora will end a slightly shorter layoff when he faces Usyk. He hasn’t fought since last October 26, when he defeated England’s David Price (25-7, 20 KOs) by fourth-round technical knockout at O2 Arena in London.

[QUOTE=Roberto Vasquez;20843663]Usyk/Joyce is always a false comparison - Joyce was a comparative novice and that fight was an amateur fight. David Price beat Fury in the amateurs. Would he now? Chisora is much harder to hit clean than Joyce with…

[QUOTE=MoneyKasha;20843378]I always wondered how a Prime Chisora vs. a Prime Povetkin would go that would be an entertaining fight[/QUOTE] I think Pov would KO him. But I think Chisora's current style suits him much better in general. He's much more…

[QUOTE=Marvlus Marv;20843373]It has to be smart pressure though. We know Usyk can handily pick off guys when they come to him, even much bigger men like Joe Joyce, so a little bit of ducking and diving needs to be employed…

I always wondered how a Prime Chisora vs. a Prime Povetkin would go that would be an entertaining fight