Chisora: I Have To Go To Usyk, I'm Going To Go To War!

If Derek Chisora is going to war, as he has told everyone who will listen, he is well prepared. The former British heavyweight champion is expecting to “eat some leather” when he faces Oleksandr Usyk at Wembley on Saturday night, it will be a case of all or nothing of he is going to claim victory.

“I have to go to him,” Chisora said. “I can’t sit and pick punches, I can’t do that. I have to chuck my punches in threes and fours. I’m a man with nothing to lose, but I bring entertainment. If I was to say I was going to do this or that, it’s all a lie. I am going to go to war.

“It is going to be a bit of a shock to him, because he is a cruiserweight coming up. We will have to look to see if he has the power as a heavyweight. When I land, he will know about it.” 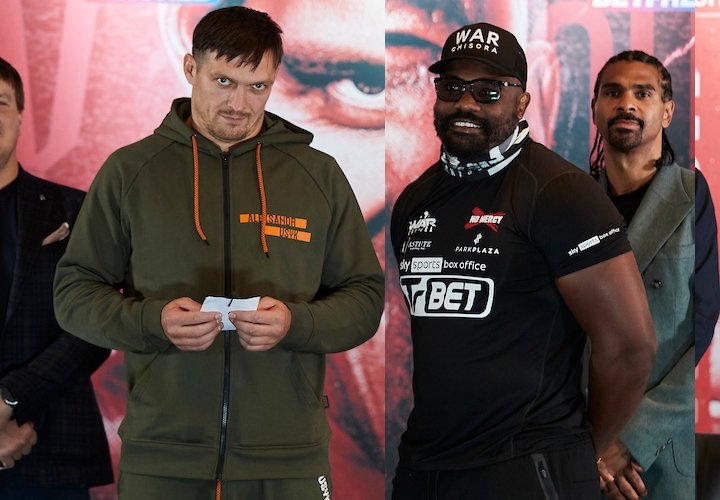 At 36, this is probably Chisora’s last shot at the big time. While Usyk is undefeated, Chisora has lost six times. If he pulls of the upset and inherits Usyk’s No 1 position with the WBO, he says he is willing to step aside to allow a Tyson-Fury-Anthony Joshua fight “if Eddie Hearn comes with big numbers”, but he believes a training regime that never stopped when lockdown happened and the fight was postponed from an original date in May has him in the right place to win.

“I have been training for about nine months for this fight,” Chisora said. “Looking at the board in the gym I have had one week off since I boxed David Price (last October).

“I think I have got more patient with what I did. I didn’t have any breakdowns, my body is performing at 100 per cent. When everybody else was in lockdown, my gym was only just for me.

“There is nothing more I can do. We have trained for eight months and I have got everything right. I knocked out all my sparring partners. We offered £2,000 for any southpaw who could knock me out. But no one has come and tried to knock me out, they have all ended up running out of the gym because they can’t handle the power and the pace.

The lack of fans could be a blow to Chisora, who has used the crowd for motivation in the past, while he has looked lethargic in a less boisterous atmosphere, most notably with a lacklustre effort when losing in a European title fight against Agit Kabayel in 2017 in Monaco.

He says he has prepared for the lack of atmosphere by ensuring there is no music in the gym when he trains, but a sterile atmosphere could suit Usyk better, who is used to winning on the road.

“The closest I ever came to boxing behind closed doors was when I boxed in Monaco,” Chisora said. “It is going to be hard for both of us.

“It’s a big fight but the fans are not there to cheer me on. This is giving people a bit of hope, because people are talking about this and forget about their problems for a split second. I’m trying to bring entertainment to their homes.

“If the fight gets good numbers, it is because of me, not because of him. I’m in great shape, my mind is bright, I’m just happy I am fighting this year, because there is so much going on in the world right now.”

For a boxer who has a press conference brawl with David Haye, who is now his manager, and threw a table at Dillian Whyte, Usyk has his respect. Indeed, Chisora says he is a bit of a fan of the former undisputed world cruiserweight champion.

“I just want a fair ref, because the last time I was in a big fight against Dillian Whyte, he took points away from me and I ended up chasing the fight and I got knocked out. I want fair judges and a fair referee, that’s all I am asking for.”

[QUOTE=Fire4231;20849692][QUOTE=Laligalaliga;20849686] Lol... Nobody keeping you from your fight UK slow train loco motive. My guess is you will be sleep by the time Chisora is.. If Chisora goes the distance Usyk needs to go back to Cruiserweight.[/QUOTE] Well, all this…