Chavez Still Wants To Fight Golovkin; 'I Think I Can Beat Him'

Nearly three years later, Chavez hasn’t given up on the idea of facing the Kazakh knockout artist. If Chavez can upset fellow Mexican Canelo Alvarez in their May 6 fight in Las Vegas, he hopes Golovkin would move up to 168 pounds to fight him.

“I don’t have a problem [fighting Golovkin],” Chavez said earlier this week during a stop on the press tour for the Canelo fight. “First I need to beat Canelo. And after I beat Canelo, and I’ve got my confidence again – I sparred with Golovkin four times and I felt his punches. He’s heavy-handed, but in his [last] fight, Kell Brook hurt him in England. I think I can beat him.” 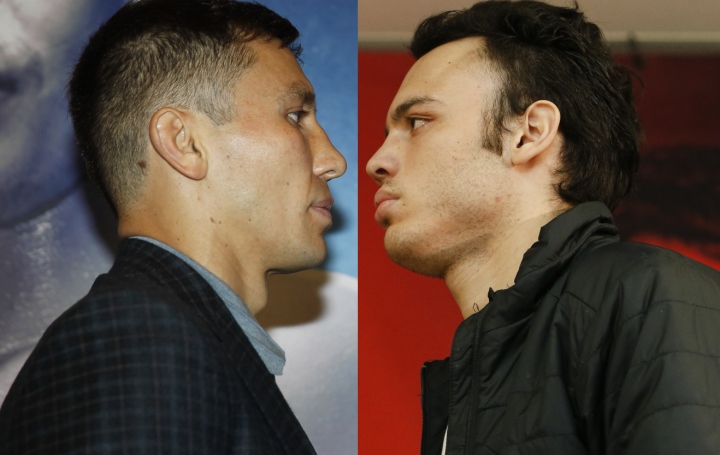 Golovkin obviously has to beat Daniel Jacobs on March 18 at Madison Square Garden before the IBF/WBA/WBC middleweight champion can move forward with a fight against Alvarez or Chavez.

Chavez (50-2-1, 32 KOs, 1 NC) sparred against Golovkin (36-0, 33 KOs) at Freddie Roach’s Wild Card Boxing Club in Hollywood before Chavez defeated Ireland’s John Duddy in June 2010. Golovkin was unknown in the United States then and had not yet won the WBA world middleweight title.

Golovkin was willing to move up to 168 pounds to fight Chavez in July 2014. It appeared at one time that the fight would take place, but Chavez ultimately turned down a guarantee of $7 million for facing Golovkin, according to Bob Arum, Chavez’s former promoter.

The careers of Chavez and Golovkin have gone in different directions since then. Chavez can change that by upsetting Alvarez, a 10-1 favorite, in their HBO Pay-Per-View main event May 6 at T-Mobile Arena.

If Alvarez (48-1-1, 34 KOs) beats the significantly bigger Chavez and Golovkin overcomes Jacobs, interest in the already long-awaited Alvarez-Golovkin showdown will intensify. Alvarez and promoter Oscar De La Hoya have been criticized for avoiding Golovkin, but Chavez hasn’t ruled out that Alvarez eventually could fight Golovkin.

Before agreeing to fight Chavez at a catch weight of 164½ pounds, Alvarez, despite owning the WBC middleweight title, had refused to fight anywhere near the middleweight limit of 160 pounds.

everybody "wants" to fight ggg. talk is cheap.

GGG does not need any of these bums. GGG has already cemented his legacy. "GGG is one of the greatest middle weights ever."---Roy Jones Jr.

[QUOTE=bigdunny1;17449933]If Chavez upsets Canelo and fights GGG it will be for a fraction of he money GGG turned down. That's the WORST case scenario for GGG. Which is why I laugh when his fans openly root for that not realizing…

I just realized that by fighting Chavez above 160, Canelo keeps this "lineal" title in case of a loss... The question though - would anybody care about this "lineal" thing or Canelo himself after that. Probably just GGG hate trolls…