Earlier this week, BoxingScene.com reported that Alfredo Angulo (24-6, 20 KOs) was one of the opponents under consideration to fight former world champion Julio Cesar Chavez Jr. - who recently revealed the date of January 26 for his ring return. The fight would take place at a venue in Los Angeles, California.

Both Chavez Jr. and Angulo are advised by Al Haymon and fight under the Premier Boxing Champions banner.

The contest would be Chavez's first fight since the lopsided decision loss to country rival Saul "Canelo' Alvarez from back in May. The contest took place at a catch-weight of 164.5-pounds and Chavez Jr. appeared to be a dead man at the weight. 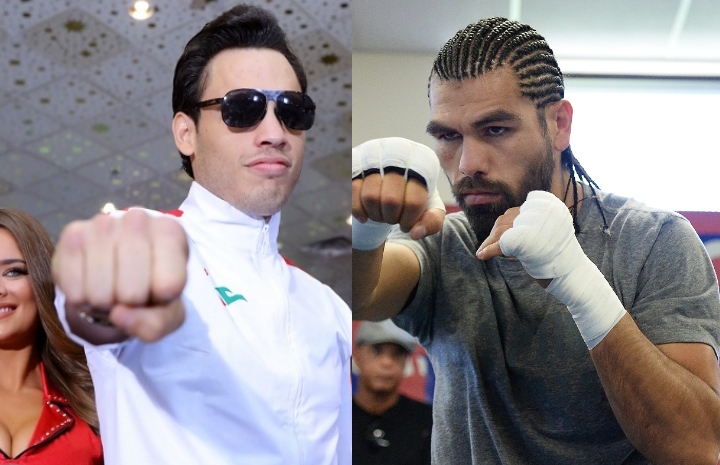 A source with knowledge of the ongoing negotiations has advised ESPN Deportes that Angulo is now the frontrunner for the fight.

The contest would be a ten rounder at the super middleweight limit of 168-pounds.

Angulo's last fight took place at 165-pounds and he's been out of the ring since August of 2016, when he lost an upset decision to Freddy Hernandez as part of the Robert Guerrero vs. David Perralta card. Angulo was coming back from a one-year layoff when he entered that fight,

Angulo is 2-4 in his last six fights. He lost three in a row with defeats to Erislandy Lara, Canelo Alvarez and James De La Rosa. He bounced back with two knockouts wins before taking another defeat at the hands of Hernandez.

According to the source involved in the negotiations, they initially were going to hold off on negotiating Julio's opponent until they knew the outcome of the Anthony Dirrell fight on Friday night against Denis Douglin - but seeing that neither would be available for January, Chavez's handlers chose to advance the talks with Angulo.

For the upcoming fight, Chavez Jr. is looking to once again secure the services of Hall of Fame trainer Nacho Beristain, who trained Chavez Jr. for the Canelo fight.

[IMG]https://media.giphy.com/media/3GhNj6yQzOCs0/giphy.gif[/IMG] Why, Why, Why! Ain't nobody want to see her try to fight again! [IMG]https://media.giphy.com/media/3GhNj6yQzOCs0/giphy.gif[/IMG] Can't we just watch cartoons or something else! Better yet call "Yori Boy" (Luis Ramón "Yori Boy" Campas Medina). [IMG]http://media.gettyimages.com/photos/dec-1993-ramon-yori-boy-campas-looks-on-before-a-fight-against-floyd-picture-id1785157?k=6&m=1785157&s=612x612&w=0&h=u0otKuE_BkeHfph-3uxMGbKWFe6WhGCXemCgn0FfQFU=[/IMG] And while were at it…

if fight is controversial, we can all rewatch in slow motion to correct our scorecards.. nevermind...

Team Chavez is looking to rehabilitate Jr. with an easy win over a name fighter, even if the guy is past his prime, smaller and been out of the ring for over a year.

Angulo too small to make an impact on Chavez jr

You'd have to be really bored to watch fighters who are not even contenders fight.