WBC 154-pound champion Jermell Charlo and challenger Tony Harrison will try to knock each other senseless when “The Iron Man” pursues his fourth defense and third stoppage during that time against "Superbad" on December 22 at Barclays Center on FOX at 8 p.m. ET/5 p.m. PT.

But during a Wednesday conference call promoting their fight, the 28-year-olds acknowledged their mutual advocacy for community outreach – Charlo (31-0, 15 KOs) near his native Houston, and Harrison (27-2, 21 KOs), his hometown of Detroit.

Charlo-Harrison is the co-main event to older-by-a-minute twin sibling, Jermall (27-0, 21 KOs), who is chasing his initial defense, fourth consecutive stoppage and 20th knockout in his past 22 bouts against third-time title challenging southpaw Willie Monroe (23-3, 6 KOs). 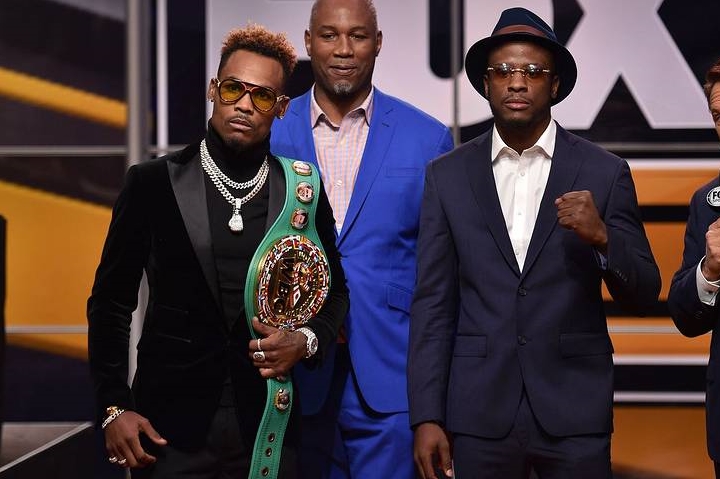 On Wednesday, the Charlo Brothers Boxing & Fitness Club in Sugar Land, Texas, and their promotional company, Lions Only, hosted a media workout for the siblings which included a toy drive and was attended by multi-division champion Floyd Mayweather Jr.

Fans who brought a gift were permitted to observe the Charlo’s workout for an event featuring “almost 1,000 toys raised for kids to be distributed later,” according to conference call host Ray Flores.

On December 8, Harrison’s Superbad Fitness boxing gym hosted at a toy and grocery giveaway to benefit the under-served community, distributing products to nearly 400 people. Harrison’s facility is located on Puritan Street on Detroit’s west side, serving as a refuge for inner-city youth from the crime, violence, gangs and drugs which has cost many friends their freedom, if not their lives.

Harrison, alongside his father, former pro boxer Ali Salaam, train and mentor neighborhood youth ages 4-and-up in the disciplines of boxing at the gym. Activities include tutoring in math and reading conducted by Jasmine Bradley, Harrison’s girlfriend, a University of Michigan graduate, an aspiring doctor and the mother of his 2-year-old son, Tony Jr., and 4-month old daughter, Jaia.

“[Harrison] owns a gym in his community, and I opened a gym probably two years before he did. I actually do what he does for his community. [Two-division champion] Danny Garcia [of Philadelphia] motivated me into wanting to have a gym and taking this money that I make in boxing and investing it,” said Charlo, also expressing a willingness to join forces toward assisting at-risk youth once their battle is over.

“I’m glad Tony does that for the kids in his gym, and it’s also going to have a big effect in his life, later, and right now, he’s training to become a champion, [inspiring] the kids around him. That’s something that I do. Maybe me and him and I can do a dual battle with his [youth] team and my team or something after this fight is over with. But right now, my focus is on defending my title.”

Charlo’s last fight in June was a two-knockdown majority decision over left-handed former champion Austin Trout while Harrison's won three straight since a February 2017 ninth-round TKO loss to Jarrett Hurd (23-0, 16 KOs) for the IBF’s vacant crown and is coming off a split-decision in May over former champion Ishe Smith.

Mutual respect aside, come fight night, Charlo plans to protect his crown at all cost.

“When it comes to fight week…These guys are coming to try to put their hands on me destroy me in some type of way. So if that’s what Tony’s coming to do, then I have to defend myself in any manner that I can,. There can be respect and all of that, but this is about the fight,” said Charlo.

“I’m not worried about all of the respect. Right now, he’s coming to take my title and that’s messing up my legacy. That hunger is deep inside of me, and I’m defending as if my life’s on the line. If he feels the same way, then it’s going to be an exciting fight worth watching.”

That's dope that they are both giving back.

Respect to these Hall of Famers

Damn this a headliner