Charlo: Eubank Jr. Has To Talk Himself Into A Fight With Me

As he remains on the hunt for a big fight, Jermall Charlo can’t help but be amused by the efforts of one potential option for the year ahead.

The unbeaten middleweight titlist defends his belt versus Australia-based Irish contender Dennis Hogan (28-2-1, 7KOs) this weekend at Barclays Center in Brooklyn, New York (Saturday, SHOWTIME, 9:00pm ET). Serving in the evening’s chief support is England’s Chris Eubank Jr. (28-2, 21KOs), a second-generation boxer who is making his way back down to middleweight as he faces Matt Korobov (28-2-1, 14KOs).

It doesn’t take much detective work to figure out the intention of pairing the winners together in 2020, particularly if it’s Charlo and Eubank Jr. who come out aces. The fight is already being talked up—especially by England’s Eubank Jr., the son of stylish former two-division titlist Chris Eubank Sr. who recently declared himself to be “a far superior fighter” to Charlo and eager to showcase his skills against the defending titlist within the first half of the new year.

“I see him talking, but it doesn’t matter,” Charlo (29-0, 21KOs) insisted of Eubank Jr. during a recent media conference call to otherwise discuss his title defense versus Hogan. “He has to talk himself into a fight with me. He’s running out of time, He’s running out of gas. When I get in his face, they don’t say none of that junk.” 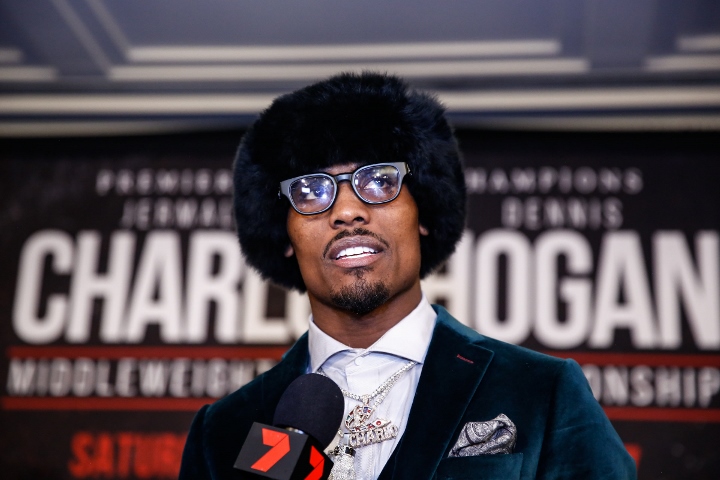 Of course, there is the matter of both boxers getting through their respective fights this weekend.

Charlo is coming off of a 12-round shutout of California’s Brandon Adams this past June in his hometown of Houston, Texas. The bout was his first since receiving an upgrade to full titlist and certainly a much stronger showing than his last outing. Six months prior came a far more formidable challenge versus Russia’s Korobov, who gave Charlo fits in their interim title fight in this very venue last December.

The 2008 Olympian for Russia—who now trains out of Florida—looks to recreate that same magic one month out from his 37th birthday versus an opponent convinced it’s his birthright to become a champion.

Eubank Jr., is the son of stylish former two-division titlist Chris Eubank Sr., but whose pro career hasn’t quite lived up to that standard. The 30-year old Brit is entering on the heels of a career-best performance, soundly outpointing countryman James DeGale in their super middleweight grudge match this past February in London, England.

Plenty has been said about Eubank’s placement on this card, but Charlo remains focused on present day business—although he does look forward to silencing his newfound divisional rival.

“I hear the things that Chris Eubank Jr says, but I’m not from the U.K. I’m from Houston Texas,” notes Charlo. “We don’t play that around here. Everybody that talks about Jermall Charlo has to live up to it.”

CEJ beats the overrated Charlo 10 times out of 10. Charlo doesn't seem like he wants this fight and is just running his mouth like he usually does. His next opponent will be soft as well. Eubank Jr is a…

I like this fight. Charlo and Eubank jr both have a decent following and both come to throw leather. It would be some form of a Uni wouldnt it? Didnt CE just win a version of a vacant title?

Charlo is a hard puncher.

Rather than talk, he could try to beat the man who got robbed against you.

Chris throws a million punches a round and has a chin like his dad, will give Charlo a hard night