Charlo, Adams and Past Alum of The Contender

Brandon Adams (21-2, 13 KOs) was winner of season 5 of The Contender last year. Should he pull off an Andy Ruiz-type upset against Jermall Charlo (28-0, 21 KOs) at the NRG Arena on Saturday night, Adams would not be the first alum from The Contender to win a world title. Sergio Mora, Cornelius Bundrage and Ishe Smith graduated from the reality TV series to capture world titles in fights that were scheduled for more than five rounds. All the former Contenders' title reigns, however, were brief.

Neither would Adams be the first contestant of The Contender on Charlo's resume. Bundrage and Charlo clashed in 2015.

"To some degree it did motivate me about what the past contenders did," Adams said. "But at the same time, when I say no, every man is their own man.  So I have to put in the work.  I have to do what I have to do to establish myself and do what I’m supposed to do to get my hand raised or become a world champion." 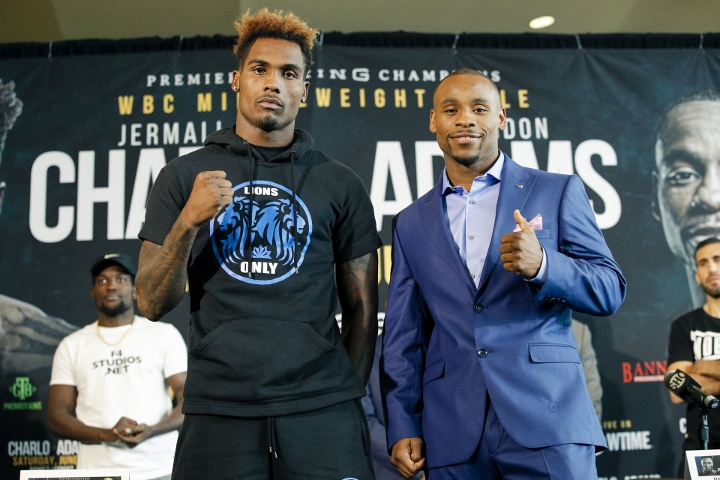 Mora, the winner of season 1 of The Contender in 2004, won a 154-pound alphabet belt by outpointing the late Vernon Forest in 2008. He lost the belt to Forest in a rematch via decision three months later. Mora went on to fight for a 160-pound belt twice, both against Danny Jacobs losing by second-round TKO and seventh TKO respectively in 2015 and 2016. Like Mora, Adams hails from southern California.

"I know Sergio Mora," Adams said. "But as far as his style and who he is, we're two different people. Sergio Mora does things his way and I do it mine."

Mora defeated Ishe Smith in the semifinals of The Contender before beating Peter Manfredo Jr. in the finals. In 2013, Smith wrested a 154-pound belt from Cornelius Bundrage in Bundrage's first defense of the belt. Coincidentally, Bundrage was a semifinalist in season 2 of The Contender. Smith also lost the belt in his first defense to Carlos Molina.

Molina was scheduled to defend the belt against Charlo in 2014 but he was abruptly deported to Mexico. Bundrage then traveled to Mexico and defeated Molina for his second world title reign. That reign was also short-lived after Charlo demolished Bundrage in three rounds in Budrage's first defense.

"This is the step up," Adams said. "This is the biggest fight of my career. My first opportunity to fight on SHOWTIME, to fight in front of a huge crowd like this, to fight a guy in his hometown who brings what he brings to the table.  But I appreciate it all, man."