Casamayor: Fans In For Surprise; Barthelemy Beats Easter By KO

“We are going to give the fans a surprise,” Casamayor said at a press conference at The Cosmopolitan. “We are winning by knockout. It’s going to be ‘Easter Dinner’ on Saturday night. He better be ready. Rances is bringing the knockout.” 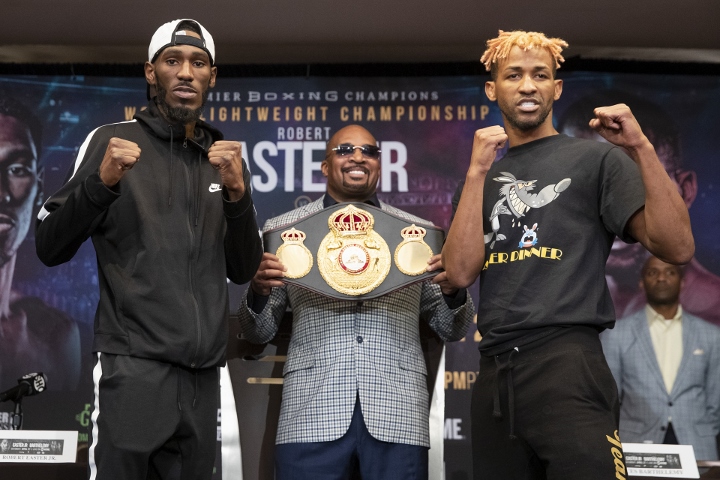 The 28-year-old Easter (21-1, 14 KOs) has lost only a 12-round unanimous decision to Mikey Garcia. That lopsided points defeat came in Easter’s last outing, a lightweight title unification fight July 28 at Staples Center in Los Angeles.

The 32-year-old Barthelemy (27-1, 14 KOs) has not been knocked out during his nine-year pro career, either. He suffered his lone loss in his 12-round rematch with Belarus’ Kiryl Relikh (23-2, 19 KOs), who beat Barthelemy by unanimous decision 13 months ago in San Antonio.

“I take nothing away from Robert Easter Jr., because he’s a great champion,” Barthelemy said. “But I can do everything. I can fight on the inside, on the outside, I have power and I’ve fought against great opposition.”

Barthelemy’s past three fights have been contested within the junior welterweight division. The former WBA world 140-pound champion can become a two-time lightweight champion by defeating Easter in the main event of a Showtime tripleheader from The Chelsea inside The Cosmpolitan.

“I have a very competitive fight in front of me,” Barthelemy said. “I’ve worked with Joel Casamayor, who has great experience combined with mine. We have great chemistry and I’m ready for everything to come together on Saturday night.

“I thank Robert Easter Jr. for taking the challenge, but I’m going to make him dance to the rhythm of the ‘Cuban Salsa’ on Saturday night. It’s going to get caliente.”

Either a KO, or Barthelemy gets DQ'd for a low blow. Seems like the guy either gets warned or gets points deducted every time he fights. When Casemayor was fighting, he wasn't shy about going low either. I wonder if…

Damn, bet the house on Rances.

[QUOTE=Evil_Meat;19692870]I'm surprised at Barthelemy being a 4-1 dog. In my betting days I would've thrown some down at those odds. [/QUOTE] Agree. This feels like a close fight that could go either way to me. And both these guys fight…

I'm surprised at Barthelemy being a 4-1 dog. In my betting days I would've thrown some down at those odds. I wouldn't be surprised to see him beat Easter but I doubt it would be by KO.