KISSIMMEE, Fla.—Well before the ESPN cameras began rolling or the event site doors even opened to allow fans into the arena, Mexico’s Carlos Cuadras quietly continued his quest to reinvent himself as a bantamweight contender.

Scores were 80-72 twice and 79-73 for Cuadras, who settled for an aggressive boxing performance against a reluctant Lozano in a bout that didn't even make the ESPN+ portion of the evening. 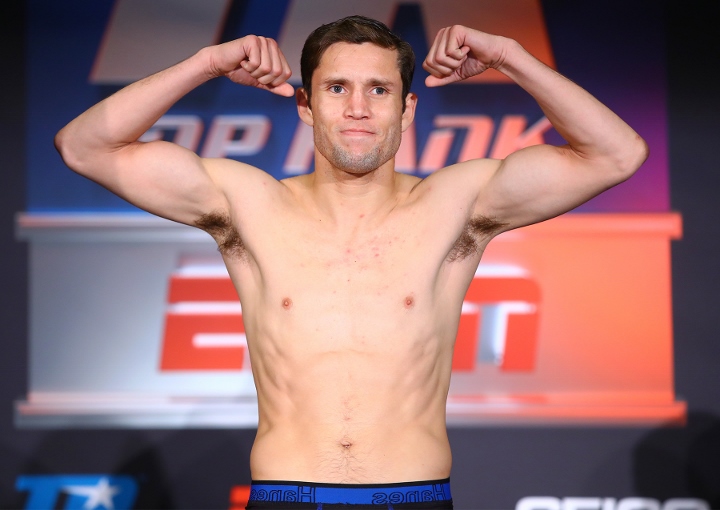 It’s been more than four years since Cuadras—once a feared puncher among little big man—has scored a knockout. Such threat never arose in this bout, although the 30-year old showed flashes with punishing right hands in round two.

Lozano refused to budge but the strategy also wasn’t winning him rounds. Cuadras had the Central Florida native briefly stunned in round three, connecting with a right hand and a double left hook to which his squat foe didn’t offer any response.

While traffic was largely one way, Lozano entertained an exchange towards the end of round six. Cuadras grew comfortable in picking off his foe from the outside, perhaps to the point of complacency as Lozano was able to sneak in a right hand and left hook which had minimal effect but at least provided a refreshing yet brief change of pace.

Cuadras reigned as super flyweight titlist for more than two years, beginning with a technical decision win over Srisaket Sor Rungvisai—at the time a veteran contender—on this weekend five years ago. His reign ended with a hard-fought 12-round loss to then-unbeaten pound for pound king Roman ‘Chocolatito’ Gonzalez in Sept. 2016.

He is just 3-3 since having served as the best 115-pound boxer in the world in advancing to 38-3-1 (27KOs). His post-title reign record only pulled to .500 after Saturday’s win, with just media, promoters and members of the boxers’ camp to bear witness.

The bout served as the opener of an 11-fight card, topped by Japan’s Masayuki Ito in a 130-pound title defense versus Jamel Herring, a decorated U.S. Marine who served two tours in Iraq and was captain of the 2012 U.S. Olympic boxing squad which competed in London.

[QUOTE=MEXfistology;19771807]Cuadras fought Estrada in a very close fight after that chocolatito fight , . Chocolatito got demoed by rungvisai . Chocolatito is the one who went down hill not cuadras[/QUOTE] Yup . Good point . Cuadras trained with Rudy Hernandez…

[QUOTE=patscorpio;19771608]Cuadras has never been the same since chocolatito fight...and vice versa[/QUOTE] He always was inconsistent. He did a good job against Estrada. He needs to go to the 118. He can't make 115 comfortably