Carl Frampton has welcomed a showdown with Josh Warrington after the Leeds man became a world champion.

The WBO interim featherweight champion, who produced arguably the best performance of his career last month as he outpointed Nonito Donaire to win the aforementioned title.

Frampton, 31, is a former WBA Super world champion at featherweight and is set to return on August 18 at Windsor Park, exclusively live on BT Sport. 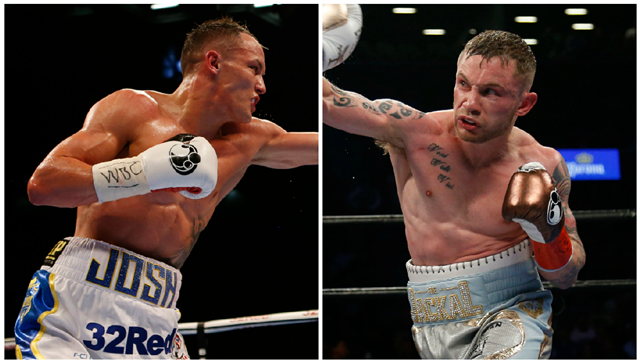 And it was understood that either Warrington or the now-former champion Selby would be in the opposite corner to ‘The Jackal’ at the stadium venue in Northern Ireland.

“I hope we don’t [go our separate ways],” Frampton, working for both TV and radio, said to presenter Paul Dempsey during the live broadcast. “I want to fight Josh Warrington, he’s a world champion and I want to fight the big names.

“I give him massive credit, all the credit in the world, in fact, and I’d love to fight him. But what I do know is that my next fight is in Belfast in August, whether that be against Josh or someone else.

“I want that fight next and it sounded to me, from listening to Frank [Warren, the promoter], like they didn’t want to make it next.”

It was Warrington’s promoter Warren, who also looks after Frampton, who dampened the flames of a second successive stadium fight for the undefeated Warrington, 27, who improved to 27-0 (5 KOs).

But ‘The Leeds Warrior’ himself said that he may not be ready in time.

“I will sit down with Frank and look at our next options,” he said after his win. “Windsor Park might be too soon. I wouldn't mind going back to the Arena in Leeds and defending my title.

“My heart says let's get it on, I am a big fan of Carl Frampton and it would be a big payday. But I prefer the end of the year. I need some time to let this sink in. We will weigh up options. The world's my oyster now isn't it?”

Frampton, though, made no secret of his desire to fight the new champion.

“Gary Russell Jr. [the WBC champion] is another option [after he beat Joseph Diaz Jr.], but I want the fight with Warrington without a doubt.

“You will see me in August, but I just don’t know who against yet.”

As well as Warrington did in beating Selby, Frampton is another level.

I am really interested to see who Carl Frampton will fight in Windsor Park. He's talked about wanting this massive fight at Windsor, so if the opponent is a gimme, I'll be disappointed.

[QUOTE=sicko;18791339]I like Frampton but why target the weakest Champion? Why not Valdez or Russell Jr? No disrespect to Warrington he earned my respect vs Selby that was a excellent fight but the Top Guys at 126 are NOT fighting each…

On recent evidence, Warrington is a better watch than Frampton who has become overly cautious of late. Donaire was there for the taking I felt, but Carl didn't want to risk anything. Kind of dull.