The third fight is likely going to take place at the super middleweight limit of 168. 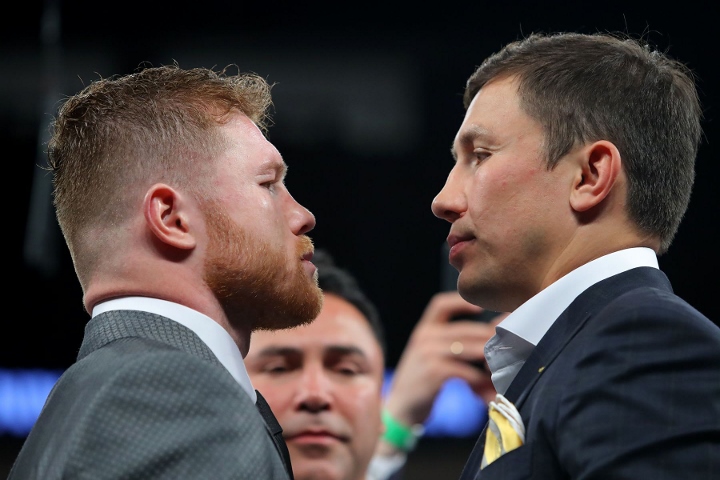 The first contest ended in a controversial twelve round split draw. In the second bout, Canelo won a twelve round majority decision.

Canelo was pushing to have the third contest this coming September.

Golovkin had other ideas, as he was focused on satisfying the IBF's order to make a mandatory defense of his middleweight title.

Then the coronavirus pandemic hit, which made the trilogy fight impossible for 2020 as the first two bouts drew tremendous gates in Las Vegas - and currently spectators are not permitted to attend events due to COVID-19 restrictions.

"We have had some discussions about doing the third fight with Golovkin which would be very exciting," Gomez told Sky Sports.

"He is willing to entertain that third fight. Hopefully we can surprise everybody by getting that fight going next year. They both realize now that their events were very successful. For them, monetarily, it would be very beneficial to fight again.

"More than anything, the fans are very interested. Both fights were very close and exciting. They both realize that now. They are both open to the fight."

Canelo is still expected to return to the ring in September or October, but currently the opponent has yet to be finalized. The contest will take place in the super middleweight division, where Canelo holds the WBA's "regular" title.

He was last seen in the ring back in November, when he moved up by two weight divisions to light heavyweight and knocked out Sergey Kovalev for the WBO world title. Canelo vacated the belt not long after.

[RIGHT][/RIGHT][QUOTE=Curt Henning;20657615]this elastic coilz clown is really out here saying canelo was hurt badly twice lol....i cant...[/QUOTE] When a man's arm goes limp it usually suggests there is a disconnect between brain and body - this is just basic science…

[QUOTE=chubuk7;20653687]Give me a break. You are like most men who know nothing about boxing.[/QUOTE] Trained boxers for 12 years my child. And you took out the rest of my post. I think you're very rude

[QUOTE=Mexican Bidness;20656789]Significantly hurt? It’s a good thing we know what stoppages are or when fighters take a knee. I wonder what we call those instances?[/QUOTE] Significantly hurt.....I doubt GGG would even make such a nonsensical claim :lol1: