Canelo vs. Fielding Nearly Got Derailed By Passport Mix-Up

Fielding faces superstar Alvarez at Madison Square Garden in the early hours of Sunday in the biggest fight of his career.

But he needed the help of an MP and a top American lawyer just to get him into the States. 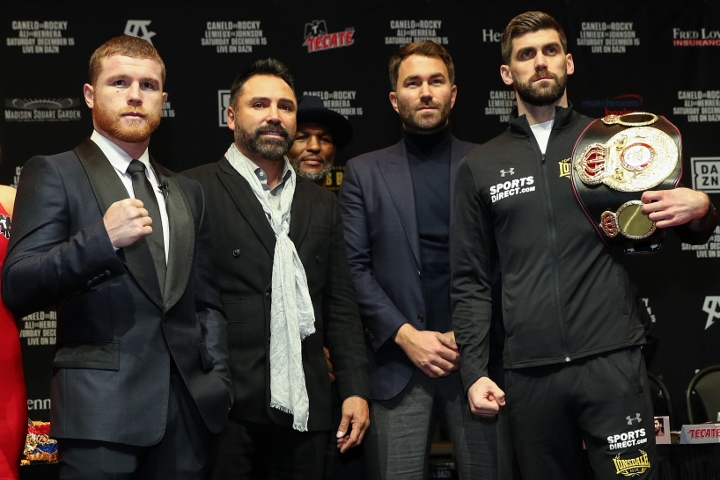 The WBA super middleweight champion applied for a visa to allow him to fight in the US weeks ago and went to the embassy in London to get it approved.

The Liverpool boxer was told his passport would be sent back to him a few days later and in plenty of time for him to fly to America.

But Fielding wasn’t told by Alvarez’s promoters Golden Boy – who were handling the application - that his passport was ready to be collected from a local depot until just a few days before he was due to jet out.

And when he went to pick it up he was informed his visa had actually been declined due to a damaged passport.

With the clock ticking, Fielding’s efforts to get an emergency passport were further delayed by the embassy being closed due to Bush’s funeral.

Promotor Barry Hearn got involved speaking to at least one MP, before a US lawyer stepped in to ensure Fielding’s passport was plucked out of the queue and officially stamped.

“It was a bit of a sweat,” said Fielding.

“It was unbelievable. I was doing my last bit of training and my passport was stuck in a post office.

“When the passport was finally in my hand it was an unbelievable feeling.

“It wasn’t my fault, it was Golden Boy who never told me it was to be collected, but I got here in loads of time.

“I wanted to fly out on the Friday to watch Vasyl Lomachenko fight last Saturday but I still got here in time for that.”

[QUOTE=Hatesrats;19354394]Canelo & GGG snack on Brits....[/QUOTE] You mean they snack on none world class fighters and those that are much smaller? Praise be. You must be really proud. But it is funny to see Canelo not want anything to do…

[QUOTE=whoseyourdaddy;19354423]And the ALTS keep on appearing out of the blue as Ca$hnelo fight approaches lol you losers are somewhat funny lol[/QUOTE] I'm not an alt and I'll tell you this fight ****ing sucks and what are you, red balls accountant?…

LMAO! You need to answer to a top 10 middleweight, instead of fighting bums. This guy, GGG and Canelo put you to bed.

[QUOTE=Bad Bart;19354038]Hahaha! I think the only reason this was given the green light was because it was discussed between Oscar and John Skipper in a room with a mirror and a razor blade. I bet you Canelo's purse those two…