Canelo: Kovalev Was Trying To Get Points - I Knew KO Was Coming

Canelo Alvarez knew he was going to secure a knockout, in the second half of his bout with WBO light heavyweight champion Sergey Kovalev on Saturday night at the MGM Grand in Las Vegas.

It was a tactical contest with Kovalev working a jab for most of the bout, with Canelo pressing forward and looking for big punches.

The end came in the eleventh round, when Canelo landed a combination that put Kovalev out cold against the ropes. 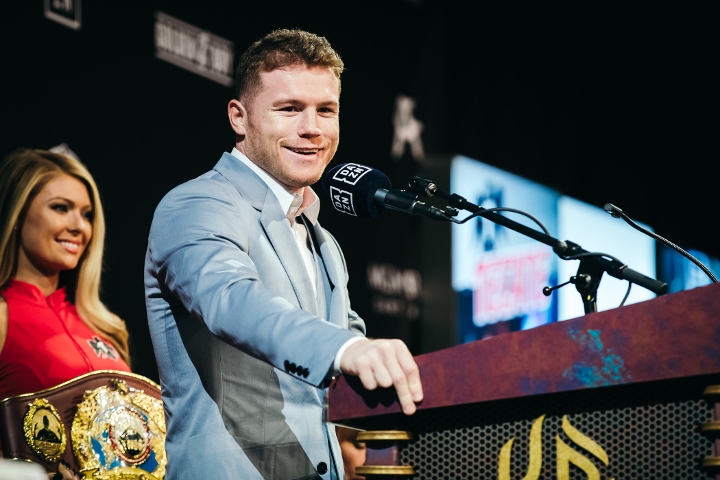 Canelo admits that it took him at least half the fight to get himself on pace for the knockout victory.

He knew Kovalev's strategy was to pile up enough points to get a decision win - but Canelo also was confident that Kovalev would eventually fall apart in the second half of the contest - presenting the opportunity to secure a knockout win.

“The plan overall was patience, that was basically it - to have patience. We knew it was going to be five, six rounds and it was going to take some time for me to get him. But honestly he’s a great fighter. I’m new at this weight, new in this division. Much credit to him, he’s a great fighter, but we stuck to our game plan. It was delayed a little bit but overall it was successful,” Canelo said.

“It was a very close fight because he was defensive, he was closing up his guard. All he was doing was try to establish points, but we knew what was coming. Inevitably it would come, and everything came out the way we had planned.”

I am sure Team Canelo knew the KO was coming. Which is surprising considering he is not really a KO artist.

[QUOTE=Bo Tae;20165679]It was a horrible, horrible fix. I hate Oscar so much, he's a cartel puppet.[/QUOTE] Yep and he will ultimately be worse than Arum, King and Haymon. He has no honor, no integrity, but is driven by a greed…

[QUOTE=Monzon99;20165602]Badou Jack clearly knows it was a fix but he also knows he can't say it or he will be blackballed out of the sport. But interpreting his responses and disappointed tone, HE KNOWS IT WAS A FIX. As we…