Canelo Alvarez After Selfie With Kovalev: He's "One of The Best"

Canelo Alvarez and Sergey Kovalev will square off and throw fists at each other come Nov. 2, but there is plenty of mutual admiration between the two foes until the first bell rings.

On Wednesday, Kovalev took a selfie with Alvarez and posted it on his Instagram page. They smiled at each other several times showing admiration, pumped fists, shook hands and gave each other a thumbs up as they started promotion for their 175-pound showdown in Las Vegas.

“I respect Sergey Kovalev going back to meeting him in 2012 [in Big Bear],” said Alvarez. “He’s one of the best in the light heavyweight division. He represents a great challenge for me. I’m very motivated by him. He presents a difficult style. It’s going to be a complicated fight. But we’re ready. I have belief in myself as a fighter and my experience.” 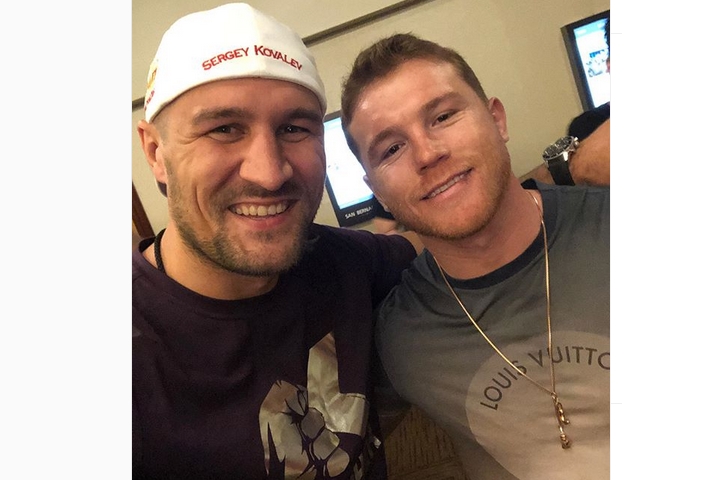 Kovalev posted a picture from their 2012 meeting in Big Bear, too, as soon as the fight was announced Friday. The back and forth kindness and complementary gestures are a far cry from the harsh words Alvarez and loathed foe Gennady Golovkin have exchanged in recent years.

Alvarez was also very respectful in his dealings with Daniel Jacobs as he promoted his fight with the former 160-pound titleholder earlier this year.

“I believe that Kovalev surprised [Andre] Ward. He is a champion who has fought difficult opponents,” added Alvarez. “If he lost against Yarde, I would not fight him and it would have been a different story. He had to win, and he performed very well.”

Alvarez is not letting the cordial proceedings take away from his task at hand, which is to ultimately punish Kovalev, specifically in the ribs, and become a four-division champion.

“I have a lot of confidence hitting the body. It’s an important key in each of my fights. It will not be an exception against Kovalev,” said Alvarez. He’ll show me the path that I need to take in order to beat him. I’m always ready for anything.”

Canelo is a fine boxer, but his fights are picked very carefully to ensure he has necessary advantages. He's always been given the benefit of the doubt with regards to scoring. Not like Kovalev. He is just a fine boxer…

[QUOTE=BoxingIsGreat;20070611]I want the fight after Gamboa, and can be made next spring. Loma, I guess, will be busy chasing trinkets at that point.[/QUOTE] "trinkets" is what your boy was fighting for since 130 lbs wba regular belt till upcoming 135…

[QUOTE=theface07;20070440]You keep saying that but when will Floyd let the young bull off the leash? I'm sure he's waiting until Loma is super old and his legs are slow. Unfortunately at that point Davis will not get full credit for…

[QUOTE=BoxingIsGreat;20070179]He's right, strategically. These good boxers like Loma, Kovalev, Usyk, should only go for big money fights. Nothing much more to prove. With Loma, though, that's not total for me. He hasn't met his match yet. Enter Davis.[/QUOTE] You keep…